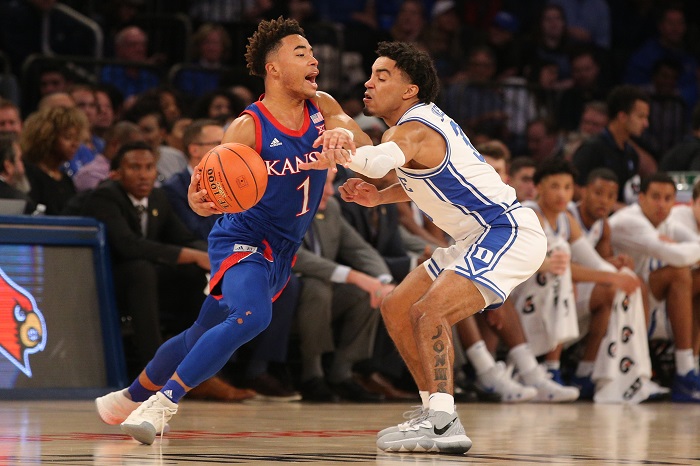 When the media arrived at Big 12 Media Day last month we were greeted with some breaking news — Texas guard Andrew Jones had been medically cleared to play. The Longhorns guard, who has battled leukemia since January of 2018, only played two games last season and was given a medical redshirt because he was still undergoing maintenance treatments. As we found out that day from Texas head coach Shaka Smart, there really wasn’t any way Jones could have played last year because, at times, he walked around with a catheter for those treatments.

Smart said they would take it slow with Jones, who played 11 minutes last season.

Apparently someone forgot to give Jones that message.

In his 2019-20 debut Jones didn’t start, but that didn’t matter to him. No, sir. He just went out and scored 20 points in 29 minutes, grabbed 3 rebounds, dished out 2 assists and basically looked like the player we saw before he started medical treatment. In fact, Jones had not scored a field goal in 673 days and his 20 points was a career high.

🎥 Andrew Jones on posting 20 points in his first game back with significant time. pic.twitter.com/y6NOj656jE

As I wrote in my Texas season preview, if THIS is the Jones Texas gets then that changes the complexion of the Longhorns’ season significantly. Remember that when he left the team to undergo treatment he was their leading scorer. Add this Jones to that backcourt, which currently features Courtney Ramey (who had a double-double in this one), Matt Coleman III and Jase Febres and suddenly you have a team that can play three guard and rotate one in, or play four guards and go with one big inside. A healthy and productive Jones changes how you scout this team, too. If Jones keeps this up he’ll get the other team’s best defender, and that opens up opportunities for the other guards.

Aside from the on-court implications, as I froze my butt off in Kalamazoo, Michigan, shooting a football game for the 2020 edition of the College Football America Yearbook, honestly after seeing Jones’ name in the box with 20 points, I warmed up a couple of degrees. Even if he falls off the earth from here, basketball-wise, his story is as good as it gets in college sports.

But he’s not going anywhere folks. And, for that matter, Texas just got instantly better.

By the way, Texas beat Purdue on Saturday, a big win for the Longhorns against a Top 25 team on the road. Jones only had 7 points in this one. But Coleman led with 22 and Gerald Liddell started and added 14 points, a career high.

There were a handful of double-doubles on the first two nights of Big 12 action. No two were more encouraging than those of a pair of centers — Kansas State’s Makol Mawien and Oklahoma State’s Yor Anei.

Mawien had 15 points and 10 rebounds on 6-of-12 shooting against North Dakota State on opening night. The significance is that it was just Mawien’s third career double-double, and Tuesday’s opener was his 72nd game and start. His entire career he’s been overshadowed by Dean Wade. Now the Wildcats need Mawien to be more than just a nice body in the middle. They need him to be more assertive and put up these kinds of numbers on a regular basis. His career averages of 7 points and 4.2 rebounds per game won’t cut it. The Wildcats can live without Mawien reaching double digits in points every night. But they need a higher rate of return on the glass.

Anei was beginning to show promise as a shot blocker late last season. He built on that against Oral Roberts Wednesday night, tying his career high with 8 blocked shots. But he added 13 points and 10 rebounds for his second career double-double. Just a sophomore, the 6-foot-10 post has a crazy wingspan and if he can add a semi-dominant low post scoring game to the sheer intimidation of his shot blocking, well, then the Cowboys look that much more formidable.

The follow-up games for the two of them? Anei had 13 points, but only 3 rebounds, in a win over Missouri-Kansas City. Mawien had 2 points and 3 rebounds in a win over UNLV that went to overtime.

Other double-doubles from the first week of non-conference games?

Baylor’s MaCio Teague had 18 points and 10 rebounds in his Bears debut after riding the pine last year after his transfer.

Texas guard Courtney Ramey had 16 points and 10 rebounds in the Longhorns’ win over Northern Colorado.

Kansas center Udoka Azubuike had 10 points and 10 rebounds against UNC-Greensboro.

Baylor’s Freddie Gillespie went for 11 points and 11 rebounds in the Bears’ 3-point loss to Washington in Anchorage, Alaska.

What Texas Tech freshman guard Jahmi’us Ramsey did Tuesday night against Eastern Illinois wasn’t terribly shocking. But the extent of his stat line certainly raised an eyebrow or two.

He led the Red Raiders with 19 points. But he also had 5 rebounds, 3 assists, 3 steals and 1 blocked shot. He also played more minutes than any Tech player.

Head coach Chris Beard started another freshman, guard Terrance Shannon Jr. and he scored 11 points. All the turnover on the roster didn’t matter, at least on opening night. The Red Raiders raised their Final Four banner and sold out the arena, which means Beard has to go to someone’s wedding next summer.

The Red Raiders did all of this without a significant contribution from transfer guard Chris Clarke, who had 2 points in 19 minutes. At least it LOOKS insignificant until you realize that even though he didn’t start he dished out eight assists.

Oh, and transfer TJ Holyfield? He scored 15 points and missed one shot.

These guys are gonna be just fine, and they gathered steam with a 79-44 win over Bethune-Cookman on Saturday. Ramsey nearly had a double-double in this one, Holyfield had 20 points and Clarke, again, while not starting and only scoring 2 points, had 8 rebounds.

Performance of the Week

See Halliburton, Tyrese. What a week for any guard. The offense is clearly flowing through the sophomore’s hands.

I would be remiss if I didn’t point out Baylor’s Jared Butler, who had 30 points against Central Arkansas on Tuesday. The sophomore guard lit it up from the extended 3-point line, going 8-of-12. He also had 5 assists, 4 rebounds and 2 steals. Now, Butler won’t do that every night, of course. But it’s encouraging to see what he can do when he gets really hot from deep. By the way, Butler had 18 points and 4 assists in the loss to Washington. As a bonus, he was 4-of-6 from the 3-point line. So, despite moving the line back a foot Butler has made 12 of his first 18 3’s of the season.

Stat Line from the Upside Down

Oklahoma guard Jamal Bieniemy scored just two points in Tuesday night’s debut against UT-San Antonio. If you’re keeping track, that’s one fewer point than that OU student who sank a halfcourt shot for a year’s worth of free tuition (pretty sure that kid is from out-of-state so the parents are probably planning a tropical vacation right now).

Well, Bieniemy’s value in that win wasn’t measured by points. It was measured by the 11 rebounds, 5 assists, 1 block and 1 steal he had against UTSA. And here I was thinking Manek would pick up the slack from Doolittle’s one-game suspension (Doolittle returned on Saturday). By the way, Bieniemy started the opener. Bieniemy returned to the bench for Saturday’s game and scored 15 points in 32 minutes. OU seems intent on starting freshman De’Vion Harmon at guard. If so, then Bieniemy becomes a valuable weapon off the bench.

The early signing period for Division I basketball starts on Nov. 11. So you can expect to see a flurry of signing announcements from each Big 12 team and we’ll recap them here next week. But Oklahoma State landed a BIG commitment Tuesday night.

I am who I am, and who I’m not, I will never be. pic.twitter.com/FDDZBd7KRJ

Cunningham had also considered Kentucky, Florida and North Carolina and is considered by some to be a potential NBA lottery pick in 2021. If you watched the video you heard Cunningham mention that a family member had been hired by OSU. That would be his brother, Cannen, who is now an assistant on head coach Mike Boynton’s staff. Cannen, a former four-year player at SMU, has worked his way up from a middle school head coach in Flower Mound, Texas, to a spot on Tulane’s staff last year to a spot on Boynton’s staff in just four years.

The Big 12 lost just three games in the season’s first week, and all were excusable this early in the season. Kansas, of course, lost its opener with Duke by 3 points. Devon Dotson is proving why he was No. 2 on my Top 25 returning players list, as he followed up his fine game against Duke with a 22-point, 8-rebound and 6-assist game against UNC-Greensboro. Baylor, as mentioned earlier, lost a close one of Washington in Anchorage, and Iowa State fell to Oregon State by 6 points.

This early in the season, teams are going to absorb those kinds of losses. Ultimately, they’re good lessons for conference play.

POWER RANKINGS: Be patient. Every two weeks during non-conference play. So expect them to drop Nov. 19, taking into account play through Nov. 17.