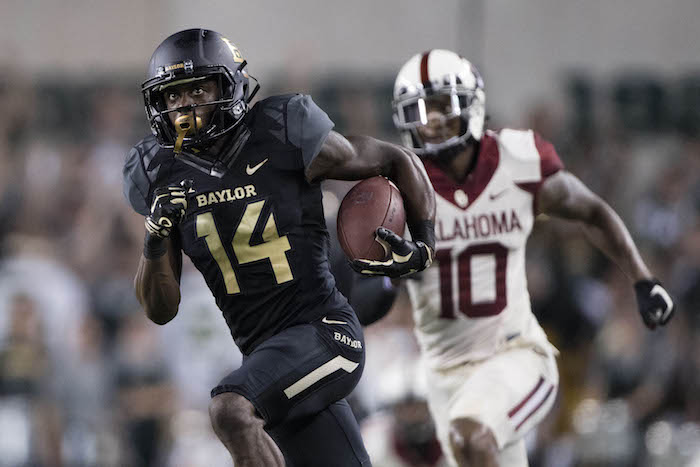 Here is everything you need to know about the upcoming Big 12 match up in our Baylor vs. Oklahoma preview and prediction.

Jalen Hurts is the Oklahoma offense. He ranks first nationally with his 219.7 season pass efficiency rating and owns five of the nation’s top 21 figures this year, however three came in non-conference play. He’s the team’s leading rusher averaging 96 rushing yards per game and his 7.0 yards per carry ranks fourth in the country. However he has been mistake prone lately, most notably a late interception vs. Iowa State late in the game last week. But the OU offense operates around Hurts, and while he may not be Baker Mayfield or Kyler Murray, he’s still a special player.

Murray has not lived up to the hype of Preseason Big 12 Defensive Player of the Year. He has 62 tackles, ranking seventh in the conference. But he’s racked up only 7.5 tackles for loss, ranking 11th in the conference, along with 2.5 sacks on the year, which is T-19 in the Big 12. The OU defense has been regressing lately and this would be the ideal time to turn it back on, with Murray leading the way.

After a mid-season lull, Mims is back in on the action with 11 catches the past two weeks combined for nearly 160 yards and three touchdowns against West Virginia and TCU. He played an incredibly important role as the game went to overtime to help Baylor stay undefeated. He’s not the team’s leading receiver (Tyquan Thornton is), but when the game is on the line, you can bet Charlie Brewer is going to his senior leader.

Bernard has been an absolute beat since the team’s star linebacker Clay Johnston went down with a season-ending injury. Last week against TCU, Bernard had 19 tackles, one sack and one interception. In Big 12 action he ranks second in the conference with 55 tackles, while ranking eighth in sacks and ninth in tackles for loss. Incredible for a guy thrust into the starting role just a few games ago.

The Sooners need to win the turnover battle. They will be on the road in a tough environment for a prime time kick off. Sure that’s nothing new for OU, but this Baylor team has thrived off winning the turnover battle, while OU has forced one turnover in conference play (six games). Jalen Hurts and the offense can put up points, but the defense will have to make a couple stops at some point and ideally turn the momentum in this game with a key turnover or two.

It’s the best offense (Oklahoma) in the Big 12 vs. the best defense (Baylor) in the Big 12. The Bears have the best pass defense efficiency in the Big 12 Conference and the No. 2 rushing defense in the conference. Now it’s OU coming into town with the No. 1 passing offense and No. 2 rushing defense in the Big 12. Baylor has also gotten to the QB better than any team in the conference with 29 sacks on the season, however, once again, it’s OU who has allowed the fewest sacks on the year. Who’s going to give? If Baylor’s defense lives up to its billing, Baylor will be in good shape.

I’m calling the upset. OU has not been the same in recent weeks with the injury to Jon-Michael Terry on defense and I believe the secondary is going to have a really tough time with Baylor’s deep group of wide receivers. On the flip side, Baylor may not hold the OU offense in check, no one really does, but they’re an opportunistic group and the country will become much more familiar with Baylor DC Phil Snow by the time this game comes to an end.

Iowa State vs. Texas: Preview and Prediction
Interview: Berry Tramel, The Oklahoman on Big 12 Parity, Rankings and More!
To Top