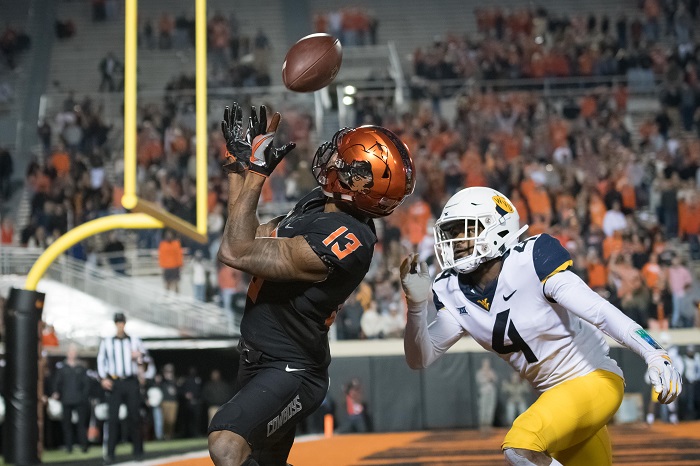 Here is everything you need to know about the upcoming Big 12 match up in our West Virginia vs. Oklahoma State preview and prediction.

It’s not a surprise that once Sanders stopped turning the ball over his team started winning games. Since the 5 turnover debacle in Lubbock followed by the 3 turnover day against Baylor he’s only given the ball away twice, one interception each against ISU and TCU, and the one against the Horned Frogs was a jump ball that his guy lost. Against a Mountaineer defense that is as capable up front as anyone to keep Chuba Hubbard in check Sander’s will have to do a lot through the air. Continuing to only throw the ball to his own guys will be paramount.

KHP may be playing himself into a First Team All Big 12 Safety spot.  He currently ranks number 3 (tied) in the nation with 11 passes defended and number 4 (tied) with 5 interceptions.  His play has contributed to a defense at Oklahoma State that is playing much better the last three games following consecutive embarrassing losses to Texas Tech and Baylor.

Doege earned his first start in the road win versus Kansas State last week.  He played well in place of Austin Kendall, going 20-30 for 234 yards and 3 touchdowns.  This week he gets to play in front of the home crowd but against a much different style of defense. The Cowboys, while not dominate but very disruptive, like to blitz and have all of a sudden become ball-hawks. The holes are there for easy passes for big gains though, and if Doege can find them quickly in his second start he can have a big day.

Dante and Darius Stills are a combined 587 pounds of living nightmare for any offensive front. Darius ranks 2nd in the Big 12 with 7 sacks, while Dante is tied for 4th with 6.  With the way Oklahoma State likes to run the zone read with Chuba Hubbard and Spencer Sanders the Stills brothers could play a big part in changing the game by disrupting the handoffs in the backfield.  Also Sanders has had fumbling issues in the past, and a tendency to throw interceptions when pressured. Add in the Hubbard does most his damage between the tackles if the Stills’ can clog the lanes and force him outside they could possibly disrupt the Cowboys entire game plan.

In just three quarters of action against Kansas Hubbard gained 122 yards and two touchdowns. Hubbard still leads the nation in rushing yards (1,726), rushing yards per game (172.6), yards per carry (6.7, min. 20/game), all-purpose yards, and yards after contact. He is 2nd in rushing touchdowns with 20. He needs to average 137 yards a game to hit the 2,000 yard mark by the end of the regular season, or 91.3 yard if you include the eventual bowl game.  In the highly unlikely but still technically possible scenario that OSU sneaks into the Big 12 Championship game he’d only need 65.8 yards a game.

It seems strange to be talking about the Cowboy defense but when a unit has 10 takeaways over the last 3 games that’s just what you do.  Yes, the Fightin’ Mike Gundys who usually try to outscore you have won 3 in a row by playing good defense and an efficient, grind it out style of offense. But can they keep it up against a strong front line defense like the Mountaineers have?  If superstar back Chuba Hubbard can’t get going to loosen up the defense for the big play-action shots downfield can Spencer Sanders, who left last week’s game with an injury to his throwing hand, throw it well enough to make West Virginia pay?  Can the resurgent defense keep up its solid play against a new quarterback they only have one game of film to study?

Will Jarret Doege pull off two upsets in a row?  The new Mountaineer passer played very well in his first start against the Kansas State Wildcats but can he keep it up against a Cowboy defense that has made 3 consecutive teams pay for every mistake?  He needs to have a similar day as he had against KSU, efficient and mistake free, and let his defense control a shaky OSU offense. West Virginia needs to win out to reach bowl eligibility and both Oklahoma State and TCU are beatable but neither will be easy outs.

No one is going to stop Hubbard from getting at least 100 yards and a few touchdowns, not even the Stills Brothers, but I think they can slow down the Cowboy offense by pestering him and Spencer Sanders.  I think both brothers, Dante and Darius, have at least one sack and tackle for loss. I also think Jarret Doege will make a few mistakes against the talented trio of OSU defensive backs of Kolby Harvell-Peel, Rodarius Williams, and AJ Green.  I just feel like this turns into a lot of exchanged punts and plays run between the 30 yard line. Doege continues to be the right QB, getting similar stats as he did last game, but adds 2 picks. The deciding score is a 50+ yard sprint from Hubbard for 6 after Kansas didn’t let him go for more than 18 yards on a single run last week.

Big 12 Football Mailbag: Who are the Best Brands in the Big 12?
Texas Tech vs. Kansas State: Preview and Prediction
To Top