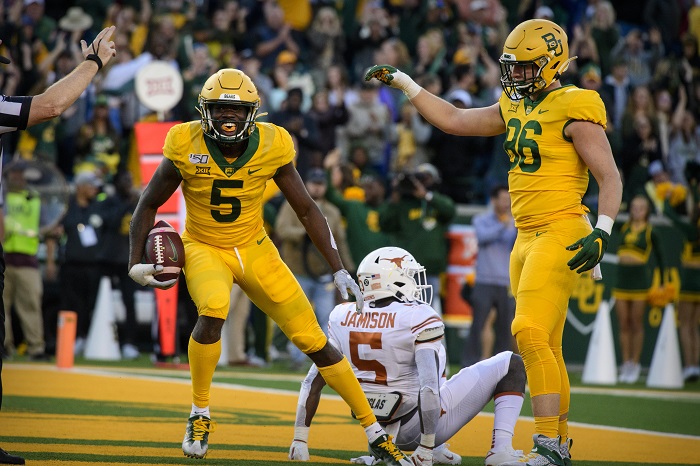 Before the game, Tom Herman was even head-butting his own players to try and get them jacked up. Unfortunately, it didn’t work.

The game was scoreless after the first quarter as both defenses were stout out of the gates. Then early in the second quarter, Baylor found the end zone as John Lovett raced 28 yards for a score and a 7-0 lead.

The two teams then exchanged six punts, with neither team putting together a drive longer than seven plays. It looked like that streak would reach seven drives as Texas had the ball at its own two-yard line with 18 seconds left in the half, but Keaontay Ingram ripped off a 68-yard run to allow Cameron Dicker to knock through a 48-yard field goal as time expired and close the gap to 7-3 heading into halftime.

The third quarter was all Bears, as they put together a nine-play, 87-yard drive on their first drive of the half, ending with Charlie Brewer’s one-yard touchdown run as Baylor took a 14-3 lead at the 7:36 mark of the third quarter. After forcing Texas into a turnover on downs at Baylor’s 39-yard line, Baylor then strung together nine plays and found the end zone on Charlie Brewer’s beautiful pass to Denzel Mims on a slant route for a 21-3 lead.

After Grayland Arnold picked off Sam Ehlinger on the next drive to crush any hopes Texas had of a comeback, Baylor knocked a field goal through to make it 24-3 at the 10:57 mark of the fourth quarter. The worst part of that drive was Charlie Brewer leaving the game after taking a hard hit near the Texas goal line on a run up the middle. Gerry Bohanon finished the game for the Bears.

Texas would add a garbage-time touchdown as time expired, as Baylor would go on to dominate Texas in a 24-10 win for the program’s first victory over the Longhorns since 2014.

The Longhorns struggled with penalties all afternoon, racking up nine for over 100 yards. Sam Ehlinger had to do it all again for Texas, but he couldn’t get it going consistently against Baylor’s top-ranked defense in the Big 12. Ehlinger finished 22/37 for 200 yards with zero touchdowns and one interception. He also had 19 carries for 79 yards. Devin Duvernay led Texas in receiving yards with 78 yards on 10 catches.