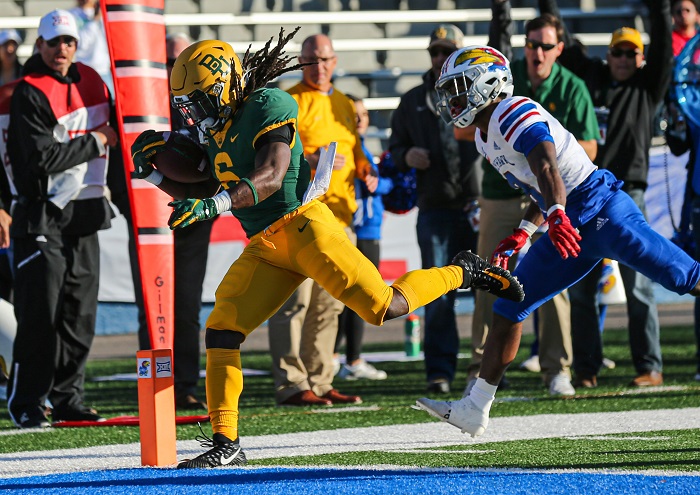 Heading into the final weekend of the regular season, Baylor at Kansas was by far the most lopsided match up of the day in the Big 12. Still, it was a very important game for both teams. For Baylor, it entered the day sitting at 10-1 ranked ninth in the country. Even though the Bears have already punched their ticket to the Big 12 title game next weekend, Baylor still needed to finish off Kansas on the road to keep their slim chance of making the College Football Playoff and at the very least, stay in the NY6 picture when it comes to the bowl season. For Kansas, it has been another rough year for the Jayhawks as they came in sitting at 3-8. Even though their record isn’t where they would like it to be in Lawrence, they had a chance to end the season with a big upset over a top ten team at home. Unfortunately for Kansas, it turned out to be a nightmare.

It was all about Baylor in the first half as the Bears scored on their first four possessions. Back up quarterback Gerry Bohanon scored the first touchdown of the game on a short run near the goal line while the following two touchdowns came on a Charlie Brewer touchdown pass to Tyquan Thornton and a 13-yard touchdown run from JaMycal Hasty. Within a matter of minutes, Baylor was already up 21-0 in the first quarter.

The domination continued in the second quarter as the Bears would put 13 points on the board before the half ended as kicker John Mayers knocked in a couple of kicks and a 14-yard touchdown run by Trestan Ebner.

As for Kansas, it was about as bad of a first half I can remember. The offense was pathetic as they had five three and outs in the first half alone. Alongside the quick ending drives, the Jayhawks also turned the ball over on downs twice and had a drive end with a Carter Stanley interception.

The first half came to an end with Baylor leading 34-0, and even then, it felt like it was worse than what the score showed. The Bears outgained the Jayhawks 296-102 in the first half and held Kansas to just 2 for 10 on third down.

With the big lead at halftime, Baylor sat starting quarterback Charlie Brewer and put in back up quarterback Gerry Bohanon. Even with some back ups in, Baylor still put their foot on the gas pedal as running back JaMycal Hasty scored twice in the third quarter to make it a 48-0 ball game.

After the Baylor score, Kansas made a quarterback change of their own as Les Miles inserted his son, Manny Miles, to replace Carter Stanley at quarterback. Whether it was a fluke or not, Kansas scored a touchdown after the change at quarterback as Manny led a ten-play drive that resulted in a touchdown pass to Andrew Parchment (missed two-point try). Unfortunately for Kansas, that would be the only score from the Jayhawks all game long.

As the game went on, Baylor even got the chance to put third-string true freshman quarterback Jacob Zeno in the game and he too was able to move the offense up and down the field. Before it was over, running back Qualan Jones and quarterback Jacob Zeno would have rushing scores to put them up 61-6. Thankfully, that would end the scoring for the day as Baylor grabbed the easy win on the road.

For Baylor, this seemed like a walk in the park as the Bears offense racked up 506 yards of offense with back ups playing most of the game. While the score was great, a win against a team like Kansas likely wouldn’t have moved them up in the playoff rankings, but with Minnesota and Alabama going down, Baylor should move up at least one or two spots.

As for Kansas, they fall to 3-9 to finish the 2019 campaign under first year head coach Les Miles. While the season didn’t go as planned, at least the Jayhawks reached three wins, the same number as last year, and were more competitive in a few of their losses this season.