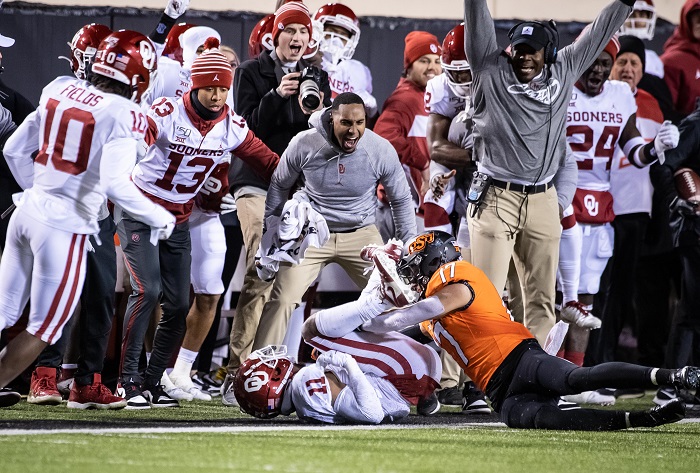 I hear it all the time, “Who has the best conference in college football?” SEC? Big 10? ACC? What about the Pac-12? Very rarely are you going to hear the words “Big 12” coming out of someone’s mouth in that conversation. Whether you do it or not, there are plenty of folks out there who love to bash the Big 12 conference (cough, Paul Finebaum, cough). Week fourteen has come and gone and in the Big 12, there is never just a normal weekend and that once again proved to be true this past weekend. From good games, to eye sores, there was some good, some bad and some downright ugly. Keep in mind that this is the last week of the regular season.

I am not going to lie, when Texas went down 14-0 early, I thought they Longhorns would just mail it in and get embarrassed at home to finish the 2019 regular season at 6-6. Well, I turned out to be wrong. Maybe Tom Herman woke up and got cleared from his concussion that he suffered from the previous week in Waco where he was bashing his head against his players’ helmets. Either way, Texas woke up and went on to outscore the Red Raiders 49-10. Texas held the ball for nearly 10 more minutes than Tech as quarterback Sam Ehlinger had himself a day with 348 yards and 3 total touchdowns. As good as Sam was, running back Roschon Johnson (105 yards and 3 touchdowns) and wide out Devin Duvernay (199 yards and 1 touchdown) were just as impressive. All in all, the offense totaled up 610 yards on the day. As for the defense, they looked completely lost and uninterested at first quarter but then got their act together as they allowed just ten points in the final three quarters. 7-5 sounds better than 6-6 although both are considered disappointing in Austin.

A good win, sloppy win or even an ugly win is something West Virginia fans should be happy about no mater how it looked. The offense was mediocre, at best, as quarterback Jarret Doege tossed three interceptions in the game. However, when his team needed it most, Doege hit Isaiah Esdale for a 35-yard touchdown pass to take the lead with just a little over two minutes left to play. From there, the defense got they key stop to hold on for the win. Speaking of the defense, sure they gave up some yards but to come away with two turnovers and hold TCU to just 17 points at home is impressive. I can confidently say that the defense did the heavy lifting of this game for the Mountaineers. With that said, I am honestly not sure if either Jarret Doege or Austin Kendall are the answer at quarterback for the future but hopefully Neal Brown and company can find the right guy (and an offensive line) to help take this offense to greater heights. With the win, West Virginia finishes the 2019 season at 5-7.

There isn’t much for me to say here as the score pretty much sums up the entire game. Three Baylor quarterbacks got playing time because after stating quarterback Charlie Brewer got pulled, backups Gerry Bohanon and Jacob Zeno saw game action as well. Of course, the quarterbacks didn’t get all the glory as the rushing attack racked up 264 yards on the ground led JaMycal Hasty who rushed for 92 yards and three touchdowns. I’d say that 507 total yards of offense is pretty good. Of course, scoring 66 points is just the cherry on top. As for the defense, it allowed just six points and held Kansas to less than 300 yards on the day. The unit absolutely shut down the Kansas offense outside of one fluky touchdown which happened when the game was well in hand. It’s on to the Big 12 title game for Baylor and the good news is that before the game, Baylor may be able to move up a couple spots with Minnesota and Alabama going down on Saturday.

Much like Texas Tech in its game against Texas, Kansas State went up 14-0 in Farmageddon. Of course, a Joshua Youngblood kickoff return really set the tone for Kansas State early. Speaking of Youngblood, he is the best Big 12 returner hands down and maybe one of the best in the country. This was a classic Kansas State game as quarterback Skylar Thompson only attempted twelve passes on the day. It was all about the run game for the Wildcats as they ran for a whopping 231 yards on a good Iowa State front. While there was no star of the show for Kansas State, it was a collective effort as Jordon Brown and Jacardia Wright led the way on the ground. As for the defense, they too played well as they allowed just three points outside of the second quarter when they gave up 14 points. They really shut down the Iowa State passing attack and completely shut down Breece Hall and their run game. In fact, Kansas State gave up just 236 yards on Saturday night. Overall, it was a heck of a team performance and win. What a great regular season for new head coach Chris Klieman as they have exceeded outside expectations at 8-4.

As efficient as Jalen Hurts was, completing 13 of his 16 pass attempts, it was all about the running game for the Sooners. Oklahoma had a field day on the ground as the Sooners ran for 283 yards on the road led by Kennedy Brooks who rushed for 160 of those yards. ESPN analysts such as Jim “Moron” Mora and Jonathan “Clueless” Vilma talk about all this finesse a team like Oklahoma has but, a lot of their wins stem from running the football and playing sound defense. That’s exactly what happened in Bedlam. The Sooners ran the football well and the defense held Chuba Hubbard in check. Of course, the two turnovers helped as well. Hey ESPN, say what you want about Oklahoma, but this isn’t your typical Oklahoma defense if you watch them play. Next up is a rematch with Baylor for a Big 12 title as the Sooners look to win their fifth conference championship in a row.

Like I mentioned earlier, Tech jumped out to an early 14-0 lead and I seriously though that that the Red Raiders would coast their way to an easy win with a Texas team down in the dumps. That didn’t happen and the offense struggled for the final three quarters as they put up just ten points. Although Jett Duffey (399 yards and 2 touchdowns) was great at times, the offense couldn’t sustain success. Heck, even wide outs KeSean Carter (150 yards and 1 touchdown) and Erik Ezukanma (135 yards and 1 touchdown) were excellent on Friday. However, the offense just stalled out too many times. As for the defense, it was a similar problem. After shutting down the Texas offense in the first quarter, they ended up allowing over 600 yards of offense and let Texas score 49 points in the final three quarters. With the loss, Tech wrapped up a 4-8 record and there is PLENTY of work for Matt Wells to do in Lubbock.

Let me start by saying, the defense played its tail off. The unit allowed just 20 points and forced three turnovers in the game. That is MORE than good enough to win a ballgame, but I will get into that as well. Honestly, this defense has been carrying the team for most of the season and I feel bad for those guys. They have a top three defense in the conference and if they had any help from the offense whatsoever, this could have been a very good football team. Now comes the problem. The offense. Quarterback Max Duggan threw for just 144 yards and completed under 50% of his passes on Friday. Not to mention, he also threw two interceptions as well. That pretty much has summed up the Frogs offense for 2019 and because of bad offensive play from the drops, mistakes, the offensive line and the inconsistency at quarterback, this team will be sitting at home this bowl season as they fall to 5-7.

Outside of the second quarter, this was a bad game for the Cyclones. At times, the offense couldn’t move the football and they faced third and long time and time again. Whether it was penalties, drops or mental errors, the offense just didn’t have it in this one. Quarterback Brock Purdy completed just 50% of his passes and threw for just 185 yards and one score. As the passing game struggled, the run game was shut down as the Cyclones had just 51 yards on the ground on 24 carries. Of course, the defense didn’t help much as they got burned on the ground for 231 yards. This team simply got outplayed and outcoached Saturday night and it sent the Cyclones to a 7-5 finish. In a season of what ifs and close losses, this team did not meet expectations. If the program is to continue to go up, it must find a way to win these close games.

I’ll be honest with you; I didn’t expect Oklahoma State to be competitive in the game. Without Spencer Sanders and Tylan Wallace, I didn’t the Cowboys had a shot in this one. I was wrong to an extent, but in many ways that proved to be true. The Cowboys tried to feed Chuba the football and it just wasn’t there. Sure, he ran for 104 yards, but it took 24 carries. With the run game held in check, more pressure was put on backup quarterback Dru Brown and he simply isn’t a guy to beat a team like Oklahoma. While some of their drives went in Oklahoma territory, they had to settle for field goals as most of their drives stalled out before the end zone.  As good as the defense was against the pass, their inability to stop the Sooners’ run game is what did them in as they allowed 283 yards on the ground. Like head coach Mike Gundy said after the game, you can’t beat a good team by kicking field goals.

Kansas finishes the year at 3-9 and honestly, I think it’s best to just move on to basketball season already if you are a Kansas fan. I am not going to waste either one of our times on this blowout to end the year.

Bedlam Fails to Live Up to the Hype as Sooners Roll 34-16
Big 12 Basketball: Non-Conference Week 4 Round Up
To Top