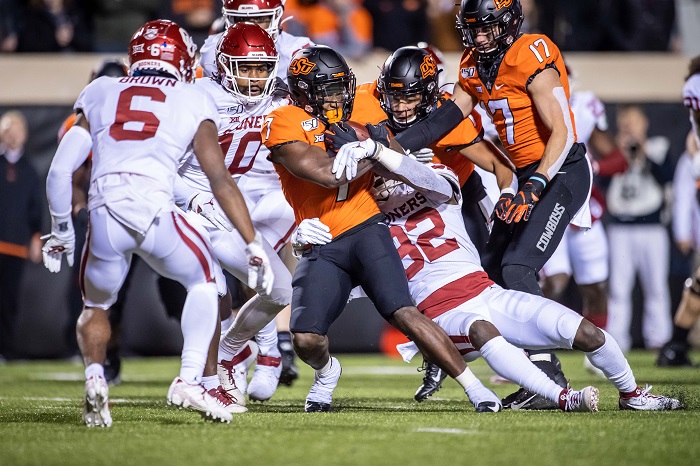 Bedlam has been one of the best rivalries in college football in recent seasons and this match up had just as much on the line any in recent memory.

The Sooners didn’t just need a win, but likely needed a convincing win over No. 21 Oklahoma State, followed by a big win over No. 9 Baylor in the Big 12 Championship Game, to have a shot at making the four-team playoff.

Oklahoma got on the board first four plays into the opening drive of the game, Jalen Hurts scrambled from 28 yards out for a touchdown as OU jumped out to a 7-0 lead. But Oklahoma State wouldn’t let the home crowd be taken out of this game early, as the Cowboys methodically went eight plays and 76 yards in 4:12 for a touchdown on a Chuba Hubbard three-yard run. In typical Bedlam fashion, three drives and three scores to start this game, as OU kicked through a field goal for a 10-7 lead on their next drive.

Late in the first quarter things weren’t going Oklahoma State’s way as a Braydon Johnson fumble led to OU turning the recovery into a trick play, ending with Nick Basquine finding Jalen Hurts for a four-yard touchdown pass and a 17-7 OU lead.

Then, we got some controversy, as Oklahoma State was helped by a controversial interception from OU that was overturned, helping the Pokes turn it into three points on a Matt Ammendola 43-yard field goal as OSU cut it back to a seven-point game. The teams exchanged field goals once again as the Sooners led the Cowboys 20-13 at halftime. The teams combined for eight possessions in the first half, with scores on seven of them.

The second half began with our first two punts of the game, one from each team. But then points were going back on the board. First  came Oklahoma State’s 26-yard field goal from Matt Ammendola to pull the Pokes to within four points. OU would then respond with a lengthy 11-play, 93-yard drive, capped off by Kennedy Brooks’ three-yard touchdown run as OU went up 27-16, its largest lead of the night.

After an Oklahoma State turnover on downs, the Sooners then went 11 plays and 73 yards with Hurts finding Brayden Wllis for three-yard score putting OU in complete control of this game with a 34-16 lead at the 10:21 mark of the fourth quarter and effectively seal the win for the Sooners.

For Mike Gundy, his woes against the Sooners continued. He falls to 2-13 against OU and has not won the game since 2014. Meantime, Oklahoma improved to 11-1 overall and 8-1 in Big 12 play, and now prepares to take on Baylor in the Big 12 Championship Game at AT&T Stadium in Arlington, Texas next Saturday.

Oklahoma State vs. Oklahoma: Preview and Prediction
Big 12 Football Week 14: The Good, the Bad, and the Ugly
To Top