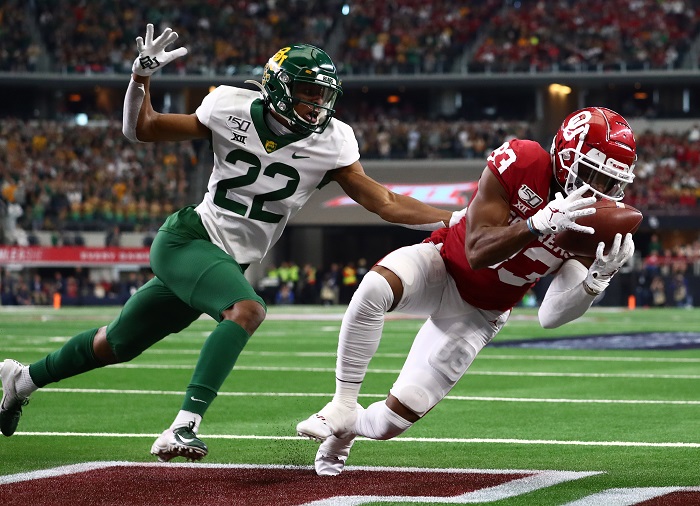 In a game that perfectly defined the Big 12 football season, the Oklahoma Sooners and Baylor Bears played a conference title game that won’t be forgotten anytime soon as the Sooners needed overtime to beat the Baylor Bears 30-23.

After exchanging punts, the Sooners got on the board in just three plays, highlighted by CeeDee Lamb taking it 71 yards on a pass in the flat, setting up a first and goal and Kennedy Brooks found the end zone on a six-yard run for a 7-0 Oklahoma lead. After a three and out, the Sooners got the ball back and that drive led to a Gabe Brkic 44-yard field goal and a 10-0 Sooner lead at the 4:51 mark in the first quarter.

Following three straight punts, the Sooners were back at their own 40-yard line early in the second quarter, when QB Jalen Hurts was sacked by James Lynch, which caused a fumble that Baylor linebacker Terrel Bernard recovered. Baylor didn’t do much, moving just three yards on the drive, but John Mayers kicked through a 44-yard field goal as Baylor was on the board. However on the drive, Charlie Brewer took a hard hit and he would be replaced on the following drive by back up Gerry Bohanon.

With under four minutes until halftime, OU had the ball up by seven points at its own 12-yard line and on the first play of the drive, Hurts was intercepted by Jordan Williams and the Bears would score three plays later on Bohanon’s 33-yard pass to Tyquan Thorton and the game was tied at 10.

Then the Baylor defense forced another three-and-out and Baylor would knock through a field goal in the final seconds of the half to take a 13-10 lead into the locker room.

In the second half, OU’s first drive went 11 plays for 63 yards, resulting in a game-tying field goal at the 7:53 mark of the third quarter. Baylor’s offense began to stall out under Bohanon, who was having a tough time getting anything down field. OU would then go 74 yards on eight plays with Hurts finding Nick Basquine from 18 yards out, as the Sooners went up 20-13 over the Bears with three minutes to play in the third quarter.

After another short, five-play drive, the Bears were forced to punt, which led to another OU field goal and a 23-13 lead at the 10:31 mark of the third quarter.

But then, Baylor made a move that turned this game on its head.

Third-string QB Jacob Zeno replaced Gerry Bohanon, and the Baylor offense got the spark it desperately needed. On his second play from scrimmage, Zeno found Trestan Ebner for an 81-yard touchdown as the Bears trailed 23-20. Baylor forced an OU punt and then Zeno’s magic continued as he found Chris Platt for a 71-yard hook up and four plays later John Mayers kicked through a 27-yard field goal to tie the game at 23 with 3:25 to play.

The Sooners had the ball and found themselves in Baylor territory and on a third and three, Hurts could not complete the pass to CeeDee Lamb, the Sooners would end up punting and Baylor took the game to overtime.

OU had the ball first in overtime and with the help of a face mask penalty, scored on three plays, capped off by a Rhamondre Stevenson five-yard run. Then, with Baylor needing a touchdown, Zeno threw two incomplete passes, took a sack and then on a 4th and 20 threw another incomplete pass as the Sooners would escape AT&T Stadium as Big 12 Champions for a fifth-straight season.

After the game, Lincoln Riley showed as much emotion as he’s ever shown, which still wasn’t much for the OU head coach. When asked how his team pulled off this win, he said, “Guts… there is great defense being played at the University of Oklahoma. We beat a damn good team and we are Big 12 Champs.”

Riley went on to add, “This league’s been great all year… Baylor is a heckuva team and one of the best teams in the country. Hats off to Matt Rhule and the Bears.”

Meantime, after Utah lost in the Pac-12 title, the Sooners have a great chance of reaching the College Football Playoff, and its clear that Jalen Hurts expects to be selected on Sunday, telling ESPN after the win, “When you talk about the perseverance of this team… we set out to do this and we did it. But we’re not done.”