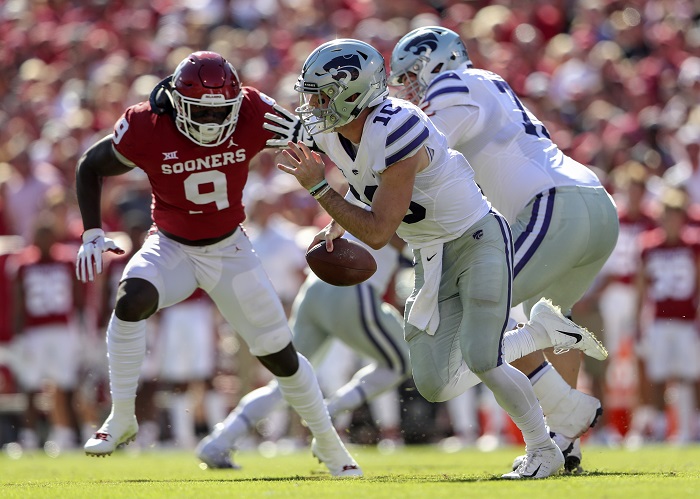 Welcome to the HCS Big 12 mailbag. This mailbag is for all you football junkies out there who root for a Big 12 school who not only have questions about your team, but other teams in the conference as well. So, join me, grab a cold brew or your favorite drink and relax as I answer all your Big 12 questions in my mailbag. For those interested, I will send out a tweet (@Derekduke25) every Monday at noon until last call (No, not 2 AM) at 8 PM CT for you to send in your questions to be answered every Tuesday right here at Heartland College Sports. I had a blast in Arlington this past weekend and of course I had a blast covering the Big 12 title game. I just want to say thanks to you for following along this season and for many more.

Also, I want to thank each one of you who submitted a question this week and for those reading, I am glad you could join me. I am doing this on Monday evening and of course this mailbag wouldn’t be nearly as fun without a cold beverage right next to me. Tonight’s drink of choice? A Jim Beam and Coke. I don’t know why but I was in the mood for some cheap bourbon and coke. Cheers!

Duke: This is tough because I feel like the Big 12 got some tough bowl game draws this season. I think Kansas State has the best chance to win against Navy in the Liberty Bowl. Navy is a solid team sitting at 9-2 before their annual matchup with Army this weekend but both teams are going to run the football. I just feel like Kansas State is a better team overall and will be able to run successfully. That’s no knock-on Navy but Kansas State will be the best rushing attack they have seen all season long.

For the poorest chances of winning, I would have to lean with the Oklahoma/LSU matchup. LSU is just a different animal than what Oklahoma has seen all season long. Surprisingly it’s not the LSU defense, it’s the LSU offense that’s putting up insane numbers. No team this season has slowed down the Tigers offense and I am skeptical if the Sooners can do that although they have been playing well defensively. It’s a tough draw but as crazy as it sounds, Oklahoma got the best playoff opponent you could ask for. It was a toss up between this game and the Iowa State/Notre Dame game for me.

@cywerd1 asks: How should Iowa State fans feel about their season, pending a bowl game? I have seen a wide range of reactions and emotions.

Duke: I hate to answer something without thinking much right now but immediately following the Kansas State loss, I had this to say about Iowa State’s season on Twitter. “I didn’t think Iowa State would finish 7-5 this season. I thought this team was on the doorstep of a Big 12 title appearance. Those close losses must start turning into wins if the program wants to continue going up. May be a season of what “ifs” to think back on. With that said, three straight bowl games are nothing to look down upon. It’s only been done one other time in program history back in 2000-2002.” For the Camping World Bowl to choose Iowa State when they had the second pick outside the playoff and NY6 bowl, it’s a big deal and not to mention, they play NOTRE DAME which is awesome for Cyclones fans. The only reason the Alamo Bowl didn’t choose Iowa State again was because Texas was available, and Austin is just an hour and a half away. Not to mention, all the Longhorn fans here in San Antonio.

Duke: Well, I travel a lot in my car across the state of Texas for game games, camps, you name it. Honestly, I don’t snack much on the drives I go on. I simply stop and eat and then hit the road once again. However, in your case of a road trip it all depends if you are driving. If you are, then alcohol is out of the question. If not, I am no cop, but I see nothing wrong in having a drink while on the road if you aren’t driving. But in this case, you are asking for snacks. I would suggest some jerky, chips and something sweet. If it were up to me, I would say any kind of jerky, probably some funyuns or some queso flavored ruffles. As for the sweet treat, I don’t mind some gummy bears or maybe a Twix. Again, those are just my personal picks. Oh, if I can’t drink, I would choose a Dr. Pepper to wash down all the salt and sugar.

@cfb_real asks: Why is it that OSU and KSU at 8-4 got crappier bowls than ISU and Texas? Much more goes into being picked for bowl games, I know, but shouldn’t the product on the field be a bigger factor? Will the Big ever go like the SEC and place the teams for them rather than better bowls picking worse teams just based off more fans and more revenue?

Duke: I hate to say it but it’s ALL ABOUT THE MONEY. These bowl committees are screaming in meetings and on the phones saying, “SHOW ME THE MONEY!” like Jerry Maguire. Let’s break this down a little. Obviously, Oklahoma and Baylor are locked in the playoff and Sugar Bowl, so the normal Big 12 bowl ties have an order to choose from. The Alamo Bowl had the first pick and they chose Texas. No should they have chosen Oklahoma State or Kansas State based on where they finished? Yes, but again $. Austin is an hour and a half away and San Antonio has a good size Texas fan base. The Camping World Bowl had the second pick and due to Iowa State’s traveling fan base when it comes to bowl games played a HUGE factor in their decision. Then the Texas Bowl and Liberty Bowl had their choices between Kansas State and Oklahoma State, and both went with the closer choices in terms of traveling in hopes of getting more fans. I know it probably isn’t the “right” way but again, it’s all about making money and I don’t see the Big 12 stepping in to stop that.

The Oklahoma Sooners’ Defensive Turnaround is Even Better Than You Think
Texas Tech Red Raiders Football: 2019 Recap and Review
To Top