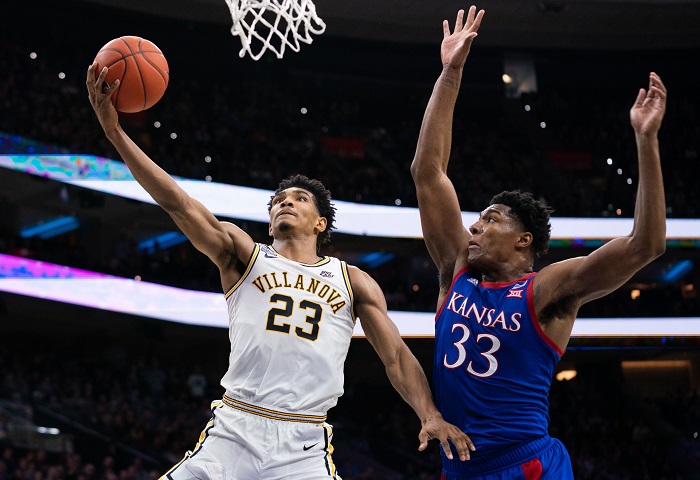 Well, Kansas being No. 1 didn’t last long. When the Associated Press poll came out on Monday morning the Jayhawks found themselves No. 5 after their loss to Villanova. It just shows that this season being No. 1 is the worst possible thing for you as a basketball program, especially this season.

Michigan State started the season as the nation’s No. 1 team. That lasted a week. The Spartans lost to Kentucky, who ascended to No. 1 in Week 2 of the season.

Then, of course, Kentucky lost to Evansville, which allowed Duke to move up to No. 1 for Week 3.

Duke managed to hold onto the top spot for a week without incident. Then, just before Thanksgiving, the Blue Devils lost to Stephen F. Austin, my alma mater. You’re welcome, America.

Louisville slid up to No. 1 in Week 5 and held onto it for a week before it lost to Texas Tech at Madison Square Garden in the Jimmy V Classic.

The Jayhawks were also No. 1 in the ESPN/USA Today Coaches’ Poll for the 62nd week overall and the 31st week under Self in program history.

Villanova changed all of that when it beat the Jayhawks in Philadelphia, 56-55. The loss, and the revolving door at the top of the rankings led Self to say that “I’m not even sure there is a No. 1.”

Well, it isn’t you, bud. At least not for right now.

Plus, in that game, guard Marcus Garrett came up with an injured ankle, but the injury did not require X-rays. Self told the Lawrence Journal-World’s Matt Tait by text message that Garrett was “doing better” on Sunday. But his status for Kansas’ next game is certainly still in question.

By the way, Gonzaga is now the nation’s No. 1 team. Merry Christmas, Zags.

TCU’s contest against Xavier on Sunday was the Big 12’s last before the Christmas break. The Big 12 goes dark until Sunday, Dec. 29, when the Big 12 plays five games, including West Virginia’s biggest game of non-conference when the Mountaineers face Ohio State. Until then, players and coaches will get some family time.

The first Big 12-Big East Challenge has concluded and the Big 12 finished 2-8.

Creighton 83, Oklahoma 73: Kristian Doolittle had 21 points and 15 rebounds for OU, and Austin Reaves added 23 points, but it wasn’t enough to overcome the Blue Jays, who had only lost two games this season entering the contest.

Villanova 56, Kansas 55: We’ve already been through this. Our Heartland College Sports boss Pete Mundo went to Villanova, so he’s a happy guy today.

Providence 70, Texas 48: Um, what? Given how Texas has played this season this may be one of the most perplexing losses of the non-conference schedule for any Big 12 team. Providence was .500 entering the game. The Longhorns shot 14 percent from the 3-point line.

Xavier 67, TCU 59: The Horne Frogs wrapped up the Challenge with the eight-point loss in Fort Worth. Kevin Samuel had a double-double (14 points, 11 rebounds).

So, for this year at least, the Big East can rightfully have a superiority complex.

Let’s go under the radar a bit and select Kansas State’s Levi Stockard III. In a 3-point loss to Saint Louis the junior forward was perfect from the field (5-for-5), hit seven free throws and scored 14 points in 28 minutes, along with grabbing four rebounds. The Wildcats really need more of this from Stockard, as his 14 points was a career high. He said after the game he felt additional motivation because he’s from the Saint Louis area. He needs to keep that chip on his shoulder every night, because that kind of production is the shot in the arm the Wildcats need.

TOP REMAINING GAME: West Virginia goes to Cleveland to face Ohio State on Dec. 29 in a huge test for the Mountaineers going into Big 12 action. We’re going to get a chance to see what WVU really is made of.

REMAINING SNEAKY GOOD GAME: George Mason faces TCU in Fort Worth on Dec. 30. GMU has lost one game this season.

BIG 12 NOW GAMES: Big 12 Games on ESPN+ include Southeastern Louisiana at Oklahoma State (Dec. 29), Tulsa at Kansas State (Dec. 29) and Jackson State at Baylor (Dec. 30), . If you’re not already a subscriber to ESPN+, now is a great time to get in on the action. Just click here to subscribe. POWER RANKINGS: The next edition will be out on Thursday, Jan. 2.