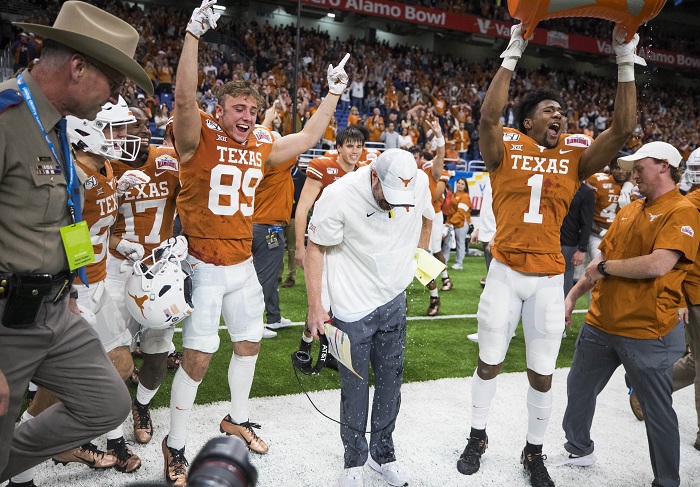 SAN ANTONIO, TEXAS — Just one day short of a year ago, Texas was feeling the highest of highs in New Orleans as they beatdown the Georgia Bulldogs in the Sugar Bowl. In just his second full season as head coach, Tom Herman was proclaimed as the savior for the Texas football program. Of course that win would catapult sky high expectations for the 2019 season and just like time and time again throughout the last decade, the Longhorns would end up breaking hearts. Fast forward through this season and there were some ups, but mostly downs, for the Longhorns. After jumping out to a 4-1 start, Texas would finish their last seven games going 3-4 to end their disappointing 2019 campaign with a 7-5 record.

When Selection Sunday rolled around, we knew Texas wasn’t going to a New Year’s Six bowl. However, when the Alamo Bowl got their first pick of a Big 12 team (outside of Oklahoma and Baylor), they jumped at the opportunity to host the Longhorns who set up shop just 75 miles from San Antonio. Of course, playing the Pac-12 runner up and No. 11 ranked Utah wasn’t the storyline coming in. It was the coaching changes that Tom Herman made to his staff that included letting go of defensive coordinator Todd Orlando and offensive coach Tim Beck, who will be leaving for another job after the bowl game.

I have no idea what Texas ate or drank during their bowl preparation, but it certainly worked because the Longhorns came to play some good football on Tuesday night. On the very first drive, Texas would put three on the board as kicker Cameron Dicker drilled a 29-yard field goal. Even after jumping out to a 10-0 lead in the second quarter, Texas tried to deliver an early big punch when they went for it on 4th and 2 from the Utah eight-yard line. However, the Longhorns couldn’t deliver as Sam Ehlinger’s pass was picked off by Utah’s Javelin Guidry. Luckily for Texas, it wouldn’t cost them anything leading 10-0 at halftime; and credit to the Texas defense as Utah crossed midfield only once in the entire first half and gave up just 127 yards of offense.

In the second half, Texas continued to stomp their foot in the gas pedal as they would go on to outscore Utah 28-10 in the final two quarters. Running back Keaontay Ingram would score twice as he caught a touchdown from Sam Ehlinger and had a 49-yard run for the final score. Meanwhile quarterback Sam Ehlinger had a rushing touchdown and two passing touchdowns with one going to running back Keaontay Ingram and speedy wide out Devin Duvernay. When the clock hit zeros and the Alamo Bowl balloons dropped, Texas came away with an impressive 38-10 win. Not only was this a big win for Texas but a big win for the Big 12 as the conference now sits at 1-4 in bowl games with the Baylor vs. Georgia Sugar Bowl game yet to be played.

Even Utah head coach Kyle Whittingham noticed the effort Texas gave tonight saying “Texas might be the most talented 8-5 (after the Bowl win) team in college football.” And while you can make of that what you will, there is no doubt that Texas came in with something to prove. “We knew that the regular season was not what we hoped for going in, but this game was a way to right some of those wrongs. We played with great effort and physicality and I am excited to get to the offseason to challenge these guys.” said Texas head coach Tom Herman after the 38-10 win.

Like it or not, Texas came in and stomped the 11th ranked team in the country. Hell, even back ups got some playing time. Utah came into the game averaging 34 points per game and Texas (with an interim defensive coordinator) held them to just 10. As good as the defense was all game long, the offense didn’t waste opportunities in the second half scoring touchdowns on their first four drives in the second half.

Tom Herman didn’t have any answers as to why his teams seem to play better in bowl games as he has now gone 3-0 during his time here at Texas. In fact, Texas hasn’t won three straight bowl games since 2004-2008. But this isn’t the 2000’s Texas teams. This 2019 team ended a disappointing season with a good quality win. Now the question will be what will this program look like heading into the 2020’s? For Tom Herman’s sake, it better be vastly different from the 2010’s. And a big part of the potential improvement will start with his new hires Mike Yurcich and Chris Ash. Happy New Year’s everybody.

All in all, it was an impressive performance for Texas to cap off an admittedly disappointing season. On to 2020.