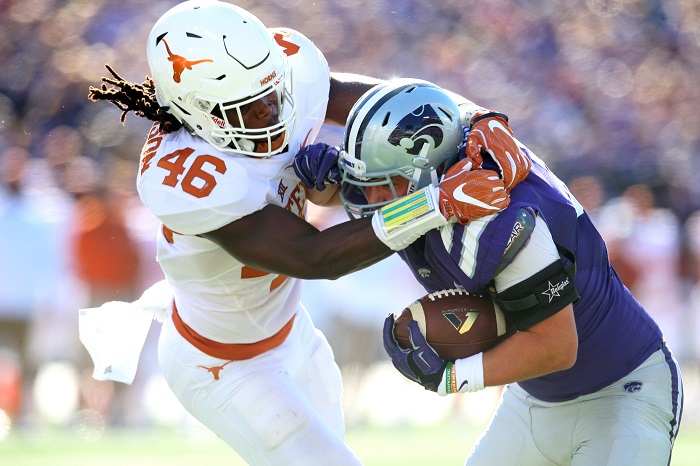 With the 2010’s coming to an end, it’s time to debate the All-Decade Big 12 team. It isn’t an easy debate and certainly there are going to be selections we have that you will disagree with, but that’s what makes it fun.

Granted, this decade saw a lot of movement for the Big 12 with teams coming and going. We will do it this way: your team has to currently be in the Big 12 and your success has to have been in the Big 12. That means Ndamukong Suh (Nebraska) and Geno Smith (who spent most of his career in the Big East), will not be selected.

If you’d like to see our All-Decade Big 12 Offense, check out that link.

So let’s get right to it on the defensive side of the ball.

This has not been a position of strength in the Big 12 over the past decade. In fact, it’s probably been the weakest position in the conference. But we hope that changes in the 2020s. However there still was some nice talent here, highlighted by Brown and Geary. Brown was part of a great 1-2 punch in 2013 with Jackson Jeffcoat and then dominated in 2014, leading UT in tackles for loss, sacks and forced fumbles, while earning First-Team All-Big 12 honors and being named a consensus All-American. Meantime, Geary gets the edge over Billings since he stayed all four years. He was a 2017 First-Team All-American, a two-time First-Team All-Big 12 selection, and he did it all as a former walk-on. You can’t beat that story for the Topeka native.

There were certainly a handful of directions to go here, but the winners include Dineen because he was an absolute tackling machine during his time at Kansas. He finished his career No. 2 in total tackles in the Big 12 and No. 5 in the NCAA, along with No. 10 in the Big 12 in career tackles for loss. He was the 2018 Big 12 Defensive Player of the Year, while also being named a Second-Team All-American. Striker was a beast during his time with OU, finishing his career No. 6 in tackles for loss and No. 9 in sacks. His 2014 and 2015 seasons were dominant with a combined 34.5 tackles for loss and 16 sacks. In his senior season he was a second-team All-American and a third-team All-American as a junior. Malik Jefferson made back-to-back second-team All-American lists, and was named Big 12 Conference Co-Defensive Player of the Year as a junior.

Vacarro was a four-year defensive back at Texas who earned First-Team All-Big 12 honors twice in his career, along with a First-Team All-American selection by Pro Football Weekly and an honorable mention choice from Sports Illustrated. Meantime, Johnson somewhat quietly had one of the best careers in the Big 12 for a defensive player. He was a four-year starter who was named to an All-Big 12 team in three of his four years. For his career he’s 13th in career solo tackles and in the top 20 in total tackles. He also ranks in the top 15 in the forced fumbles.