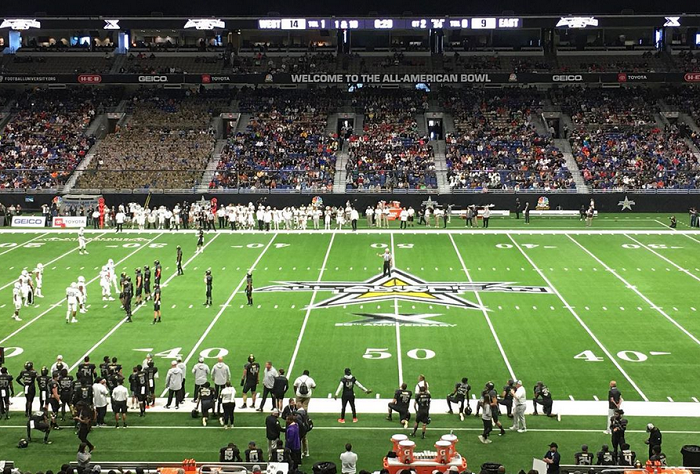 San Antonio, TX- A good crowd came to watch 100 of some of the nation’s best high school football prospects on Saturday. However, it seems like this year there weren’t as many future Big 12 prospects due to other All-Star games on the rise but make no mistake, there was plenty of talent in the Alamodome throughout the week with the game and the national combine that took place the day before the game. There was a total of eight future Big 12 players that were signed with schools like Texas, Oklahoma, TCU and Iowa State. Unfortunately, that number would stay the same throughout the game because for the first time since I have been covering this game (2017-present) there were no Big 12 commitments during the game which was odd. Although schools like Texas and Oklahoma were in on a few guys, it just didn’t work out for whatever reason. In the end the West Team won 33-20 and like I mentioned in my preview, all the guys I had to keep an eye on were on the West squad and after the game, I had the chance to catch up with a few of them.

Unfortunately, Xavion couldn’t play due to a knee injury. While he did suit up, he just didn’t want to injure himself any further and I don’t blame him one bit.

It seemed like we all had to wait a little bit before Prince hit the field but when he did, I thought he did a great job pursuing the football no matter who had it. In fact, he even got a sack late in the fourth quarter to help secure the win late. As soon as I started talking with Prince after the game, the Austin media swarmed him, but he did talk about a few key things going on in Austin right now. “I feel like I played good today. The incoming guys all have the same mindset coming in. We all want to help this team anyway we can to help this team win.” Most importantly he was asked about new defensive coordinator Chris Ash and he responded with “I have talked to coach Ash a few times, he is a great guy and he wants to go to work just like me.”

Andrej didn’t get the start but from the second West possession of the game, he played several series at left tackle and he looked like he belonged. Andrej is athletic and a little leaner that I expected but he played well. It was interesting to see him play right next to TCU signee Garrett Hayes.

Not only was Bijan the only five-star Big 12 commit but he was the only future Big 12 player to start in this entire game as everyone else on this list was a backup. Robinson flashed his quickness on a nice run and a catch but that was the problem. He simply didn’t get the football enough in this game. In fact, he only got one stinking carry. For a guy who dominated during the week, it was mind boggling.

Out of all the Big 12 signees (Outside of Xavion Alord) it seemed like Jalin got the least amount of playing time. Standing at 6’4, 220 pounds, Jalin played more of a receiver role on the outside rather than putting his hand in the dirt. Coming out of a small Texas town, Jalin didn’t play against elite level talent but his offers speak volumes. Georgia, LSU, Michigan and Ohio State all wanted this kid and when you come from a class 2A school and those types of schools are blowing your phone up, that is impressive. While Jalin didn’t have the performance he likely wanted, the talent is certainly there, and I see a very bright future for him.

Even though he wasn’t listed as a starter, Garrett saw plenty of action on Saturday and it seemed like from the second series on, he got more playing time than a lot of the other offensive linemen on his team. Now, Garrett is listed as a tackle but during the game he played left guard and was often playing next to Texas signee Andrej Karic who was at left tackle. “I think I did pretty well today. There is definitely improvement needed and this is the first time I went up against guys like me, but I really enjoyed it.” As far as the program direction for TCU, Garrett said “I always see positive. That’s what I like to see. I think it is going to be a good year and we have two people here today who will help the team.”

I’ll be flat out honest with you; Patrick Jenkins is listed at 6’2 but I don’t think that’s very accurate. He is probably closer to 6 foot than he is 6’2. But make no mistake, he can play some football. He did a great job clogging the running lanes and, on several occasions, he pressured the quarterback. It was easy to see why LSU wanted him in the first place and Patrick will be a solid player at the collegiate level.

If my memory is correct, there were only two guys from the San Antonio area that made this bowl roster in defensive end Devin Grant (Colorado signee) and wide receiver Daniel Jackson (Iowa State signee). That itself is an honor and I have spoke with Daniel plenty over the last year or so and he is a great guy to be around and he can play. “It’s the best competition I have ever been around in practice.” Jackson said. He also voiced his opinion on the Iowa state season saying. “They did an amazing job. There were close to winning more games and a Big 12 title. So many mistakes and things led up to that but it’s an easy fix and something we can control. I think we have a good path upward and a good group coming in.” When I asked him, what were some things he wanted to accomplish at Iowa State one of the first things he mentioned was, “A Big 12 Championship.“

Baylor Overcomes Rough Shooting Night, Shuts Down Texas in 59-44 Win
Lincoln Riley is an Even Money Favorite to be Dallas Cowboys’ Next Head Coach
To Top