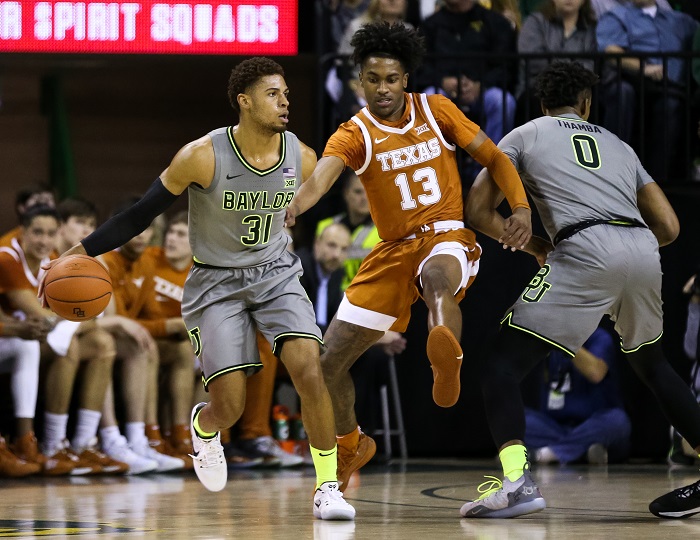 WACO, Texas — Baylor’s Big 12 opener wasn’t scintillating basketball. But in this conference there are nights like this, and the Bears managed their own shortcomings nicely in a 59-44 win over Texas on Saturday night.

The Bears were not sharp overall. They shot 31.3 percent from the floor, a percentage that dropped in the second half as the Bears struggled to shoot efficiently. Texas played well defensively, too, making things difficult on the Bears on the perimeter.

The Bears’ free-throw shooting saved them offensively, as they were 14-of-16 from the line. Baylor also limited its turnovers (eight), snagged 48 rebounds and played stifling man-to-man defense throughout the contest, despite the program’s reputation for its half court zone. Baylor head coach Scott Drew talked about why the sharpness of the defense this season has been so important for the Bears.

What made it work for Baylor was a 13-2 run early in the game that helped the Bears build an 18-8 lead. From there, the Bears maintained that lead and never allowed Texas (10-3, 0-1 in Big 12) to get close enough to make them uncomfortable, despite their inefficient night from the floor. As a result, Baylor led for nearly 38 minutes of the game.

“In a game like this you hope to get that kind of a run, so when you can get one and you can build a lead like that, it’s huge,” Drew said.

MaCio Teague scored 21 points (including a perfect 9-for-9 from the free throw line), while Mario Butler added 13 points. Freddie Gillespie had 12 rebounds, but just five points. But the Bears kept the offense balanced, as eight different players scored and seven logged at least 17 minutes.

Baylor wasn’t sharp, but Texas ended up being worse. The Longhorns shot 34.6 percent for the game but their second half was atrocious. Late in the contest the Longhorns were 2-of-10 from the 3-point line and 3-of-12 from the free-throw line. Shooting just a little bit better from those areas, especially early in the second half, might have made a comeback easier to manage.

After the game Texas head coach Shaka Smart lamented his team’s inability to cash in on second-chance points (21-5 in favor of Baylor) and being outrebounded 48-35.

Instead Texas found itself squandering a fine game from forward Jericho Sims (13 points, 15 rebounds), and got little else from its guards, the strength of its roster. Courtney Ramey had 11 points, while Andrew Jones and Matt Coleman III each had nine points. As a team the Longhorns shot 18.8 percent from the 3-point line and 33.3 percent from the free-throw line, turned the ball over 11 times and had three shot-clock violations on offense.

Baylor travels to Texas Tech on Tuesday while Texas hosts Oklahoma on Wednesday.