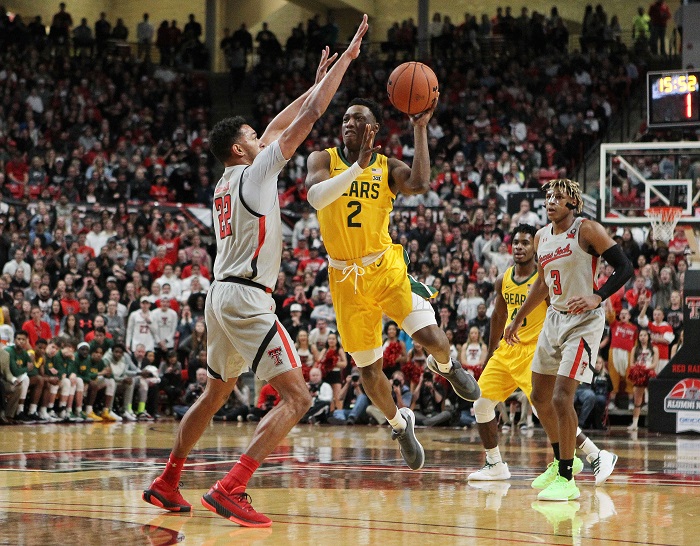 The Baylor Bears and the TCU Horned Frogs both improved to 2-0 in Big 12 play with wins on the road Tuesday night over the Texas Tech Red Raiders and the Kansas State Wildcats, respectively. Our Matthew Postins broke it all down in our Big 12 Postgame Periscope after Tuesday’s games. The Postgame Periscope is our instant review of each weeknight’s games, with analysis and context for that night’s action and beyond.

The Bears went on a 9-3 run to start the second half, taking a 30-22 lead, and it was just enough to keep the Red Raiders at bay the rest of the way. Baylor maintained the lead on Davion Mitchell’s 14 points, well-timed jumpers after the Red Raiders scored baskets that seemingly swung momentum their way and an overwhelming advantage of the glass. Baylor outrebounded Texas Tech, 43-25, including an 18-10 edge on the offensive end. Mark Vital (13) and Freddie Gillespie (10) combined for 23 rebounds. Postins talked about how all of those factors played a role in Baylor snuffing out Tech’s 10-game home winning streak in Big 12 play.

Jahmi’us Ramsey scored 20 points for Texas Tech, 14 of which came in the second half. He hit five 3-pointers, but he was the only Red Raider able to heat up from distance, going 5-of-10. Kyler Edwards had 10 points (including two 3-pointers). Davide Moretti, one of the league’s best shooters from the 3-point line, went 0-of-6.

As for TCU (11-3, 2-0), the Horned Frogs might be the surprise 2-0 team in the league. After beating Iowa State in overtime on Saturday at home, the Horned Frogs needed a tip-in from Kevin Samuel (10 points, 15 rebounds) in the final two seconds to outlast the Wildcats.

TCU had a 10-point lead at halftime, but the Wildcats (7-7, 0-2) cut into the lead by finally getting the Horned Frogs to cool off from the 3-point line, where they had made six in the first half (they ended up 10-of-27) and actually shot better from the arc (37 percent) than the field overall (33 percent). Desmond Bane had 16 points, R.J. Nembhard had 15 points and Jaire Grayer added 10.

As for Kansas State, Xavier Sneed had 19 points and Makol Mawien had 10 points. Cartier Diarra had just five points and battled foul trouble all night before fouling out in the final minutes of the game. David Sloan gave the Wildcats 8 points off the bench and Montavious Murphy contributed 7 points.

Saturday’s schedule features two interesting games featuring Baylor and Texas Tech. The Red Raiders will face West Virginia on the road, while Baylor will face Kansas on the road. Meanwhile on Saturday TCU hosts Oklahoma State and Kansas State is at Texas.