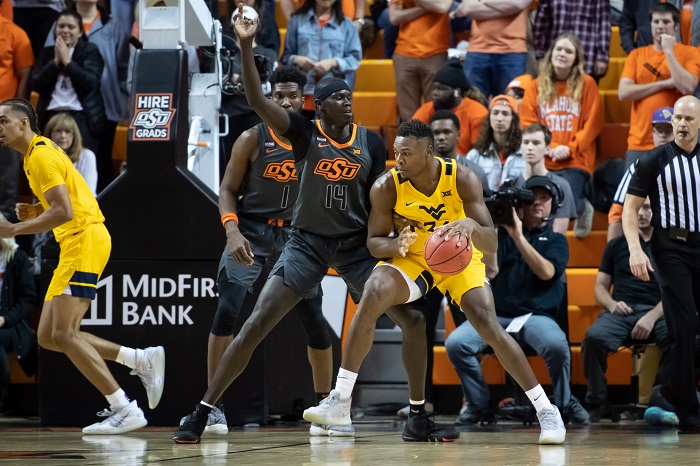 If you watched Monday’s game with Oklahoma State, you hear ESPN commentator Fran Fraschilla talk glowingly about the Mountaineers’ overall defense. This tweet pretty much sums up how he feels.

At @WVUhoops, “Press Virginia” is a thing of the best. Instead, @CoachHuggs half-court defense strangles you like an anaconda. 12 deep, toughness, massive size inside & Arkansas transfer, Gabe Osabouhien, has faster hands than a card shark on 42nd Street. They can guard ANYONE.

But let’s not take Fraschilla’s word for, although he’s one of the game’s best voices. Let’s look at the data, shall we?

On Monday against Oklahoma, even though it was an ugly game, the Mountaineers forced 19 Cowboys turnovers, held the Cowboys to 29.2 percent shooting and to just one made 3-pointer.

Against Kansas last Saturday in the Big 12 opener the Mountaineers held the Jayhawks to 3-of-17 shooting from 3, outrebounded the Jayhawks by 14 and forced 14 Kansas turnovers.

In that seismic win over then-No. 2 Ohio State, the Mountaineers held the Buckeyes to 31.3 percent shooting, forced 22 turnovers and had 7 steals.

In the Big 12, after the win over the Cowboys, West Virginia was second in points allowed (60.4 ppg), first in field-goal defense (35.7 pct), first in 3-point field-goal defense (23.5 pct) and fifth in rebounding defense (34.1 per game). The one area of needed improvement is in turnover ratio, where the Mountaineers are dead last in the league at .43 (209 West Virginia turnovers to 215 opponent turnovers).

This isn’t a passing thing in Morgantown. Not only have Bob Huggins’ players bought into his way of thinking after last year’s lost campaign, they’re executing it on the defensive end, too. Yes, there are some things to fix on offense. But defense can minimize some of those deficiencies until they’re improved.

Oh, and on Wednesday the Big 12 Conference fined Bob Huggins $10,000 for comments on officials. Apparently this was the third time he’s done this. So it’s three strikes and your wallet gets lighter in the Big 12, apparently. Does this mean he starts over?

I must admit, I did not see a 2-0 start for the TCU Horned Frogs in Big 12 action. But here we are. The Horned Frogs are taking full advantage of what I would call a soft start to Big 12 action, with games against Iowa State, Kansas State and Saturday’s game with Oklahoma State (one that I’ll be covering). The Horned Frogs need to win Saturday, too, because things are about to get REAL after that.

After OSU, the Horned Frogs go on a two-game road trip to West Virginia and Oklahoma. Then, it’s back home to host Texas Tech. Then it’s the Big 12-SEC Challenge game at Arkansas, one of the best defensive teams in the country.

I love TCU’s big three — Desmond Bane, Kevin Samuel and R.J. Nembhard. All three have played well to start Big 12 action. But the pieces around them don’t quite fit yet. With that upcoming schedule, it’s distinctly possible the Horned Frogs could lose all four of those games I outlined, which is why beating OSU on Saturday is a key piece of giving the Horned Frogs a chance to reach 20 wins this season, a number I think they have to hit to entertain an NCAA Tournament bid. To do that TCU has to maximize every opportunity it has outside the conference’s Big 4 — Baylor, Kansas, Texas Tech and West Virginia. Maximizing that means winning most of TCU’s 10 league games outside of the Big 4.

The Horned Frogs did get some great news this week as they took in a mid-year transfer from USC, Charles O’Bannon. The former five-star recruit was a 2017 McDonald’s All-American who averaged 21.4 points and 8.1 rebounds in high school at Bishop Gorman, where he led that program to four state titles. He played just 14 games at USC, missed all of last season with a pinky injury, and has missed all of this season with a hand injury. He’ll be eligible to play for the Horned Frogs in January. This is a significant get for the Horned Frogs. On the downside, TCU received a notice of allegations in the FBI college basketball investigation, though the notice doesn’t implicate current head coach Jamie Dixon.

NO NEED TO STRESS ABOUT TECH YET, EXCEPT …

That interior game needs to get better for the Red Raiders, and I’m talking specifically about the rebounding on the defensive end.

The rebounding disparity between the Red Raiders and the Baylor Bears on Tuesday night simply can’t happen consistently. The Bears outrebounded the Red Raiders 43-25 in Baylor’s 57-52 win, and had an 18-10 advantage on the offensive glass. But when you look at the rebounding stats in the conference, Texas Tech doesn’t seem to be struggling. They’re in the Top 5 in every category, with the exception of offensive rebounds, where they’re eighth in the league, averaging 10.0 per game.

But Baylor absolutely killed them on both ends Tuesday night, and I guess that’s not shocking. Baylor is No. 2 in rebounding offense, rebounding defense and offensive rebounds in the Big 12. But the disadvantage stood out and had a direct impact on Tech’s attempt to overcome Baylor’s lead in the second half.

Chris Clarke is this team’s dominant rebounder this year, averaging 8.6 per game. Jahmi’us Ramsey, TJ Holyfield, Terrance Shannon Jr. and Kyler Edwards are each averaging in the 4-5 range per game. Baylor held Clarke and Edwards below their averages.

WHAT CAN BRAUN (PRONOUNCED BROWN) DO FOR YOU?

The true freshman, Christian Braun, is starting to carve out a role off the bench for Kansas in Big 12 play. For the fourth straight game Braun had at least 6 points, scoring 9 against Iowa State. More importantly, in the past two games, head coach Bill Self has trusted Braun to play key minutes. Against the West Virginia Mountaineers last Saturday he played 30 minutes. Against Iowa State he came in when Marcus Garrett suffered an ankle injury and contributed immediately. Backcourt depth was somewhat of a concern coming into this season. Braun is working to make that less of an issue. The 6-foot-6 forward bears watching moving forward.

After Wednesday’s games four teams in the Big 12 were 0-2 in league action — Iowa State, Kansas State, Oklahoma State and Texas. I was curious to see how the teams that started 0-2 in Big 12 action last year fared by season’s end.

Kansas State started last season 0-2 and ended up 14-4 in Big 12 action with a share of the Big 12 regular-season title and a trip to the NCAA Tournament.

Oklahoma State started last season 0-2 and ended up 5-13 in Big 12 action and missed the postseason.

West Virginia started the season 0-2 and ended up 4-14 in Big 12 action, but bought its way into the CBI Tournament.

Based just on one year’s sample size, expect at least two of these teams to miss the postseason entirely.

RESULTS
(all times CST unless noted)