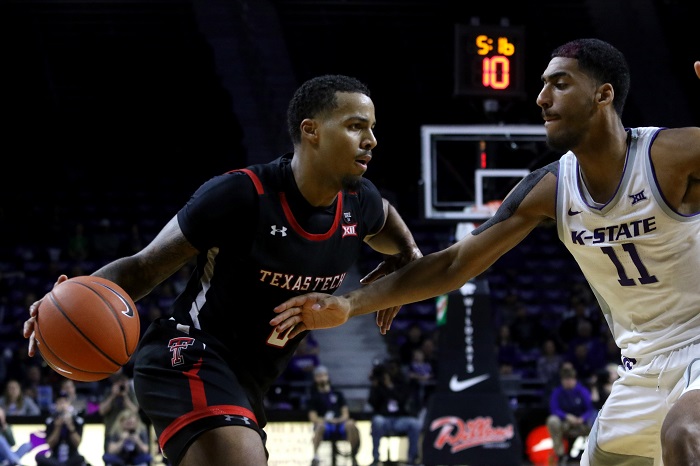 The West Virginia Mountaineers, the Kansas Jayhawks and the Texas Tech Red Raiders claimed victories Tuesday night in Big 12 men’s basketball action. Our Matthew Postins broke it all down in our Big 12 Postgame Periscope after Tuesday’s last game. The Postgame Periscope is our instant review of each weeknight’s games, with analysis and context for that night’s action and beyond. And don’t forget to catch Postins with on Sirius/XM radio’s Big 12 This Morning radio show at 9 a.m. CST to talk Big 12 basketball with Ari Temkin. It’s Channel 375.

Red Raiders guard Kyler Edwards had a career-high 24 points. Davide Moretti added 14 points and Jahmi’us Ramsey had 10 before fouling out. Kevin McCullar had 10 points off the bench.

Kansas State got 19 points from Cartier Diarra, 14 points from Xavier Sneed and 11 from Montavious Murphy. In the Periscope I talk about the factors that led to Tech breaking its two-game losing streak. The loss was just Kansas State’s second to Texas Tech at Bramlage Coliseum in the Bruce Weber Era.

Kansas (13-3, 3-1) beat Oklahoma, 66-52, on a night in which Devon Dotson couldn’t play due to a hip pointer. Guard Isaiah Moss stepped up into his place with 20 points, his best game as a Jayhawks since transferring to Iowa. Udoka Azubuike had a double-double — 16 points and 14 rebounds — and Marcus Garrett added 15 points. Kansas also had a 46-32 edge on the glass.

Kristian Doolittle had 13 points and 10 rebounds for Oklahoma (11-5, 2-2), but that wasn’t nearly enough to compete with Kansas, even though OU was only down one at halftime. De’Vion Harmon had 13 points and Brady Manek had 10 points. Austin Reaves, who normally scores 16 points a game, had only four points, and OU shot 30 percent from the field.

TCU was led by Desmond Bane (13 points) and R.J. Nembhard (14 points). Center Kevin Samuel fouled out after logging 6 points and 3 rebounds. TCU had just 6 points off the bench.

Wednesday’s games include Iowa State at Baylor and Texas at Oklahoma State, both of which are at 8 p.m. CST.