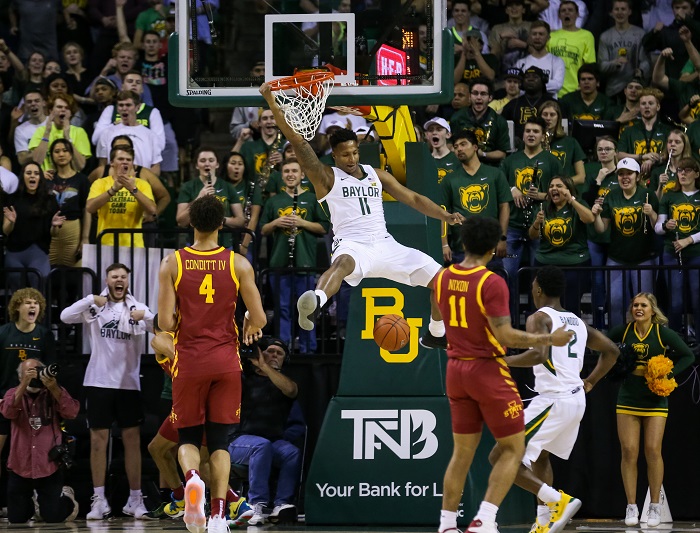 The Baylor Bears and the Texas Longhorns claimed victories Wednesday night in Big 12 men’s basketball action. Our Matthew Postins broke it all down in our Big 12 Postgame Periscope after Wednesday’s last game. The Postgame Periscope is our instant review of each weeknight’s games, with analysis and context for that night’s action and beyond.

#HookEm and #SicEm take the wins tonight in #Big12MBB and @heartland_cs breaks it down. https://t.co/ragEp09gEa

Jared Butler led the Bears with 19 points, while Davion Mitchell — who helped fuel the 17-3 run — had 15 points. Mark Vital scored 11 points and Freddie Gillespie had a double-double, 14 points and 11 rebounds. Baylor also finished with a 45-34 edge on the glass.

I would like thundering dunks by Jericho Sims for $500, Alex?

Texas (12-4, 2-2), meanwhile, defeated Oklahoma State (9-7, 0-4), 76-64. The Longhorns made 15 3-pointers and shot 46 percent from the arc as five different Longhorns were in double figures, led by Kamaka Hepa and Jase Febres, who each had 15 points. Courtney Ramey had 14 points, Andrew Jones had 12 points and Matt Coleman III had 10 points. Texas also had 11 blocks, with Kai Jones leading the way with five.

Oklahoma State, which had struggled shooting the ball for the first three games of Big 12 action, shot 40 percent from the floor and 40 percent from the 3-point line. But the only player for OSU that reached double figures was Kalib Boone, who had 12 points off the bench. Lindy Waters III and Isaac Likekele each had nine points and Cameron McGriff had eight points.

The Cowboys are one of two teams in the Big 12 without a league win. Kansas State is the other.