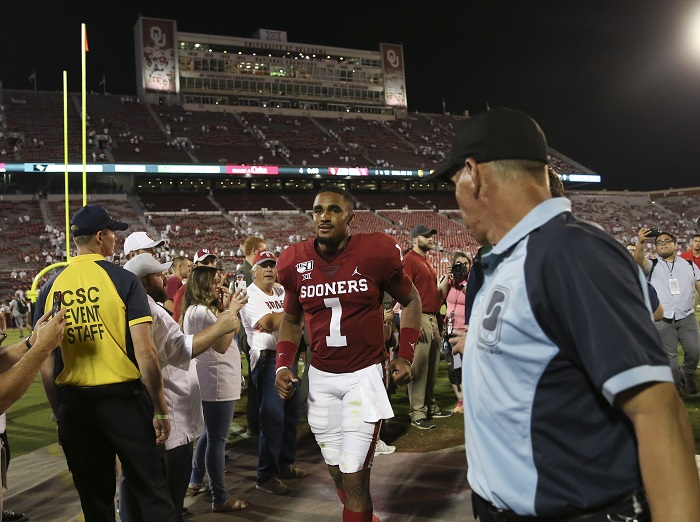 Unfortunately, it is that time of year again. It felt like just yesterday the Big 12 football season was kicking off and within the blink of an eye it’s gone. Of course, some fans don’t mind when the season is flying by because when your team is bad, you are likely wanting it to be over as soon as possible. Today, we finish off the series. Last up, are the Oklahoma Sooners who finished the 2019 season at 12-2 under head coach Lincoln Riley.

It was a breeze to kick off the season as Oklahoma outscored non-conference opponents Houston, South Dakota and UCLA a whopping 167 to 59.  To kick off Big 12 play, the Sooners handled Kansas and Texas Tech to get off to a 5-0 start before knocking off the Longhorns in the Cotton Bowl to make it undefeated halfway through the regular season.

After demolishing West Virginia, the Sooners suffered their first defeat of the season on the road in Manhattan against Kansas State. Still with playoff hopes intact, Oklahoma squeaked by Iowa State, Baylor and TCU before finishing off in-state rival Oklahoma State to head into conference championship weekend at 11-1.

With a playoff berth on the line, it took an overtime victory over Baylor to get in before getting walloped by LSU in the College Football Playoff.

It’s hard to separate but I think I will lean towards the Baylor game in Waco. Oklahoma perhaps had one of the worst first half starts in recent memory being down 31-10 at halftime. Then the unthinkable happened as the Sooners went on to outscore Baylor 24-0 in the second half and pull off the comeback of a lifetime. They showed that no matter how much they were down; they had the ability to comeback in a ballgame at any point and time.

I could go with the Kansas State game but with the way they got dominated by LSU on a national stage was embarrassing. Being down 49-14 at halftime and letting Joe Burrow throw for 400 yards and 7 touchdowns in two quarters was backbreaking. Not to mention it wasn’t just bad for Oklahoma, it was bad for the entire conference because the conference champion was getting their teeth kicked in. Don’t get me wrong, LSU was a great team but there is no excuse for that performance in Atlanta. It was completely unacceptable.

On offense, Jalen Hurts running the football was key to Oklahoma’s success. Jalen rushed for nearly 1,300 yards and alongside running back Kennedy Brooks, it was a lethal one-two punch in the backfield. Of course, having a guy like CeeDee Lamb at receiver helped too as he racked up 1,327 yards and 14 scores on the year. As expected, Oklahoma ranked first in total and scoring offense in the Big 12.

How about the defensive turnaround from 2018? Defensive Coordinator Alex Grinch did miracle work in Norman as his defense finished first in rush defense and fourth in pass defense in the conference. After giving up 33.3 points per game in 2018, the 2019 defense gave up 27.3 points per game and improved in just about every defensive category possible. Perhaps to biggest jump was the third down defense. In 2018 opponents were converting 46.4% of their third downs and in 2019 that number dropped to just 31.6%.

Offensively, just a couple things stuck out to me. Jalen Hurts turned the ball over in some crucial situations and at times, his accuracy was questionable. With that, the offensive line play was shaky during certain points of the year with injuries and lineup rotations.

Defensively, I don’t have too many knocks on them after praising them for their improvement. In fact, at times, they carried the team. Consistency was an issue but overall, I thought they played well this past season.

Jalen Hurts will be gone but in steps in highly touted quarterback Spencer Rattler. The entire backfield will return but the loss of wide out CeeDee Lamb will hurt so some of those former five-star wide outs (Trejan Bridges, Theo Wease and Jadon Haselwood) will have to fill the void. Up front, the Sooners will return their entire offensive line including superstar center Creed Humphrey.

On defense, losing Neville Gallimore (DT), Kenneth Murray (LB) and Parnell Motley (CB) will sting but if the Sooners can find some more depth at corner and a premium pass rusher, this defense should be fine next season. Again, this are big losses, but this defense will return a lot of experienced guys.

Big 12 Comes Up Short in Kansas, Kansas State Suspensions
Why wrestling fans should give the Big 12 a shot
To Top