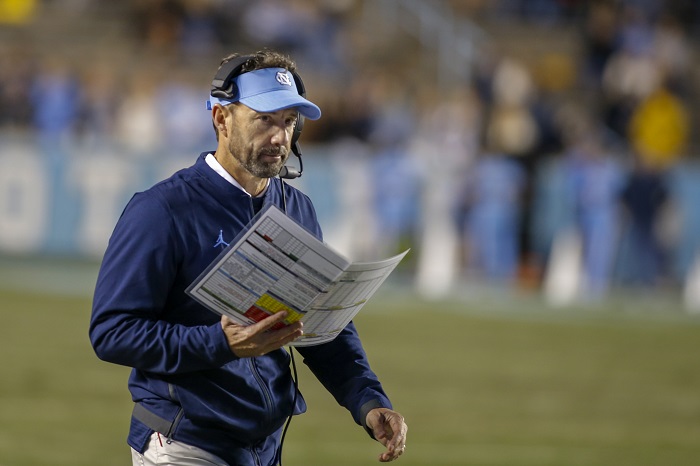 The Baylor Bears continue to build an incredibly impressive staff under new head coach Dave Aranda. According to SicEm365, the Bears will be hiring former UNC head coach Larry Fedora as the team’s new offensive coordinator.

The Big 12 is familiar territory for Fedora, who along with last season’s stint with Texas, was Oklahoma State’s offensive coordinator from 2005 to 2007 under Mike Gundy. And this will be his second time around with the Bears. Fedora spent six seasons as an assistant coach at Baylor from 1991-1996, including time coaching the receivers, tight ends and running backs. Other stops include his head coaching gig at Southern Miss from 2008 to 2011 where he went 34-19 and 20-12 in Conference USA.

This news comes one day after Baylor picked off another hot coach from LSU, bringing on Jorge Munoz to be the team’s passing game coordinator and wide receivers coach.

The Bears are coming off an 11-3 season and the loss of Matt Rhule, but it looks like AD Mack Rhoades is dishing out the big bucks to keep the momentum going in Waco.

It might be too late, but the Big 12 has finally grown a backbone. The Big 12 Conference sent a “cease and...

The landscape of collegiate athletics has changed forever with the implementation of the name, image, and likeness profitability for college athletes.  Well...

Texas Tech Should Avoid AAC At All Costs

It’s clear that Texas Tech should be in aggressive pursuit of Pac-12 membership. The Big 12 is on the ropes for the...

When we talk about football competitions in the US, the first one that immediately comes to mind is NFL. This is why...

The NFL and NCAA are fundamentally the same sport that follows the same rules, and yet at the same time, it feels...