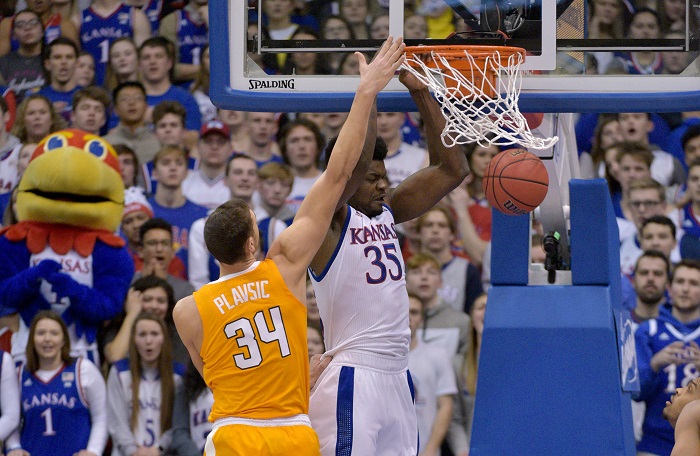 The fourth week of Big 12 basketball saw a coaching milestone, a nasty brawl and a coach see the heat turn up on his metaphorical seat. Here is this week’s Good, Bad and Ugly for Big 12 men’s basketball.

Saturday’s win over Missouri gave West Virginia head coach Bob Huggins 876 wins for his coaching career. The win tied him with Kentucky legend Adolph Rupp for No. 7 on the NCAA’s all-time wins list. Should the Mountaineers defeat Texas Tech on the road on Wednesday — which will be no easy task, given that the Mountaineers have had their struggles on the road in Big 12 action — Huggins would assume the No. 7 spot by himself.

The milestone isn’t just a nod to Huggins’ longevity as a coach, but also to the rebuilding job that he’s done at just about every program he’s taken over since his career started at then-NAIA Walsh College in 1980.

OKLAHOMA STATE GETS A ‘W’

Man, Oklahoma State needed that win against Texas A&M on Saturday. Even though it wasn’t a league game for the Cowboys, they sorely needed it.

The 11-point win over the Aggies saw the Cowboys put at least five players in double figures for the second straight game. Isaac Likekele led the way with 13 points. The win was Oklahoma State’s first win of 2020. Yep, the Cowboys had not won since beating Southeastern Louisiana on Dec. 29 in Stillwater. So the win snapped a six-game losing streak.

Now, there’s the question of momentum. I like some of the strings that head coach Mike Boynton Jr. has pulled. Moving Yor Anei and Thomas Dziagwa to the bench has allowed both to play with more freedom. Lindy Waters III seems to have finally emerged from his shooting slump. The youngsters in the starting lineup — Kalib Boone and Avery Anderson III — are giving the Cowboys a little juice, even if they’re not scoring consistently every night. Transfer Jonathan Laurent has found a rhythm, too.

But it gets no easier for the Cowboys. Big Monday comes to town on Jan. 27 and has Kansas in tow. After that, there are two games the Cowboys clearly need to win — at Oklahoma on Saturday and vs. TCU the following week. We will talk more about that in the Bad section.

TECH GETS ITS RESPECT ON A NATIONAL STAGE

I was at the Kentucky-Texas Tech game Saturday night (and let me tell you, that’s a long drive to Lubbock from Dallas-Fort Worth). I’ll be writing a lot more about the experience next week, but it was one of the best regular-season game atmospheres I’ve been in, regardless of the sport. It was a big crowd, it was a big game and it was a big moment for Texas Tech to show itself off to the nation. Recruits were in town (including Micah Peavy, who has already signed to join the Red Raiders next fall) and the place was nearly packed. Tech did lose in overtime (here’s the link to my story), but Kentucky head coach John Calipari was effusive in his praise of what Chris Beard and his staff has built in Lubbock, along with the Texas Tech fans, calling them a ‘classy crowd’.

When you’re crashing the ‘blue blood’ party of college basketball, you only get so many opportunities to make a good impression. Tech took full advantage on Saturday night.

THE BIG 12-SEC CHALLENGE ENDS IN A TIE

For the second time in four years, the Big 12-SEC Challenge ended in a tie, 5-5. But, since the Big 12 won the challenge last year, 6-4, they get to keep the trophy another year, because in that case the team that won the trophy previously hangs on to it. That leads to an important question — THERE’S A TROPHY!?

The only game that featured two ranked teams — Kentucky (No. 15) and Texas Tech (No. 18) — saw the SEC win. But the Wildcats needed overtime.

The other four ranked teams that were in action Saturday all won. Three of them were Big 12 teams — No. 14 West Virginia (def. Missouri), No. 3 Kansas (def. Tennessee) and No. 1 Baylor (def. Florida).

ESPN Gameday was at Allen Fieldhouse for the Tennessee-Kansas game, eschewing the one game featuring two ranked teams that was also taking place at a Big 12 arena, Texas Tech.

We’re starting to get to that time of the season — late January — where certain teams are more desperate for league wins than the others. That desperation is really starting to kick in at Iowa State, Kansas State and Oklahoma State.

Of the three, Oklahoma State — which was under .500 last year and missed all postseason action — is the only one above .500 entering this week at 10-9 overall. As mentioned in the Good section, the Cowboys get Kansas at home on Monday night. But, on the whole, their remaining schedule gives them opportunities to stay afloat for a bubble spot. They do have five remaining games with ranked teams, but seven others with unranked teams. Three of them are against the other two teams fighting to stay in the bubble race — ISU and K-State. The Cowboys also get OU twice, TCU at home and Texas on the road. The Cowboys are starting to shoot better and play better. The opportunity exists to get 15-to-17 wins before heading to the Big 12 Tournament.

Iowa State is a game under-.500 and faces a similar schedule — five games remaining against ranked teams (starting with Baylor this week) and seven against unranked teams. Of great value to ISU are two games against Kansas State and two games against Texas. Winning three of those four would be quite helpful in staying .500 or better before heading to Kansas City. Iowa State, of course, won the Big 12 Tournament last year.

But, remember — if they can’t make it to the NCAA Tournament, a record above-.500 should be enough to get these teams into the NIT. It’s better than nothing and it gives all three coaches the chance to do more player development before the season concludes.

But the time is now to get started in that direction.

THE EYES OF TEXAS ARE UPON SHAKA

The Texas Longhorns lost to West Virginia, 97-59, last week, and with that the temperature turned up on head coach Shaka Smart’s previously warm coaching seat. It wasn’t just that Texas went to Morgantown and lost. Most expected that. It was the HOW. The 38-point margin of loss. The tepid player effort throughout. The Oscar Tshiebwe end-to-end hustle play that left Texas in the dust.

As I explained in my Postgame Periscope from that night, it changed the calculus on Smart’s future at Texas.

Our HeartlandCollegeSports.com owner Pete Mundo and I had the same conversation on our podcast earlier this week. You should give that a listen, too.

Listen, Smart has a $10 million buyout per the Austin American-Stateman, so Texas would have to fork over serious cash to get rid of him. And they have the money. The question is whether, in Year 5, if Smart is the right guy for the future. He’s proven he can recruit top talent. But he hasn’t put that together on the floor consistently. That’s his biggest crime at this point, and he has two months to show Texas brass that he’s the right guy for the future. I tend to think Smart will be in Austin in 2020-21, but he’s on the clock now.

The Kansas-Kansas State brawl was a bad look and completely unnecessary in a blowout like that one. I’m not going to go into it in-depth here. That’s because we were all over it all week. Here’s my Periscope from that night:

Here is Pete Mundo’s and I’s discussion about the brawl and its fallout.

And here is another radio hit I did with the Condon and Miller in Des Moines later that week.

It all adds up to this — this was the worst brawl we’ve seen in college basketball in some time and I expect additional rules related to these types of brawls will be reviewed in the offseason. But don’t expect the NCAA to step in and dole out additional punishment. It’s not their way when it comes to these types of events. They let the conferences handle it.

At one point during Saturday’s game with Kentucky I checked Texas Tech’s 3-point shooting. It was dismal. And if you’re looking for a reason for Tech’s two losses, this week, the 3-point shooting is a primary one.

In their last two games the Red Raiders have shot 7-of-36 from the 3-point line. When you have two of the better 3-point shooters in the league in Davide Moretti and Kyler Edwards, that really shouldn’t be happening. Edwards is having the better run right now. Moretti’s drop in 3-point shooting overall this season is curious. Last year he shot 45.9 percent from the 3-point line, one of the best percentages in the country. Entering Saturday’s game it was 38.5 percent (he was 1-of-5 against Kentucky). An extra 3-pointer here or there would have made a huge difference.

It’s not fair to put this all on Moretti because there are other great shooters on this team. But Moretti is a foundational piece of what the Red Raiders are doing on the floor this year. It just shows that when one of those foundational pieces is not performing at the level expected, it can have ripple effects throughout the team. As a whole, they’re not a confident team from distance right now.

On Wednesday there are three games on ESPN+ and Big 12 Now — West Virginia at Texas Tech, Texas at TCU and Oklahoma and Kansas State. So if you don’t have the subscription to ESPN Plus, here’s the link. We’ve made it really easy to sign up.

Despite Overtime Loss, Texas Tech vs. Kentucky Lives Up to its Hype
Big 12 Basketball Power Rankings: Week 5
To Top