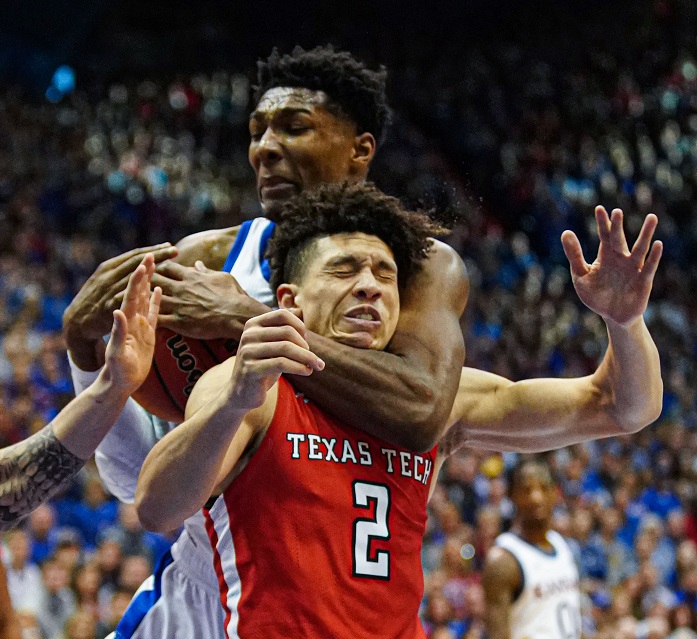 The fifth week of Big 12 basketball action saw another coaching milestone for Hugs, the further stratification of the Big 12 and what appears to be a historic loss for Oklahoma State. Here is this week’s Good, Bad and Ugly for Big 12 men’s basketball.

THE ‘RICH’ GET RICHER

A few weeks ago there was distinct separation between the league’s Top 4 teams and the rest of the Big 12. Now, it looks like there are three tiers, with Baylor and Kansas now on a strata on their own. And the Bears and Jayhawks don’t appear to be coming down anytime soon.

The Bears should be the No. 1 team in the nation come Monday after another 2-0 week in which they handled Iowa State on the road and then beat TCU at home. Baylor is now a win away from a 9-0 start in league action and two wins away from starting 10-0 in league action for the first time since 1948. And, right now, it’s hard to see how the Bears can be slowed down.

Kansas, meanwhile, has won six straight league games since its loss to Baylor at home. The Jayhawks are humming along as well, in part due to the emergence of Christian Braun off the bench and, at times, in the starting lineup. The Jayhawks may not be quite as deep as the Bears at this point, but I don’t think they’ll be 12-point losers the next time they tangle with the Bears on Feb. 22 in Waco. Until then, the Bears and Jayhawks have opportunities for the next few weeks to improve their standing in the Big 12 and open up more distance between themselves and the rest of the conference.

Right now the pair are considered No. 1 seeds by both ESPN.com’s Joe Lunardi and CBSSports.com’s Jerry Palm. I can’t say I disagree with them right now.

Saturday’s win over Kansas State gave West Virginia head coach Bob Huggins 877 career wins, which allowed him to pass Kentucky legend Adolph Rupp for No. 7 on the NCAA’s all-time wins list. In the next couple of days I’ll have an extended piece on this big moment for Huggins, and the bigger moments that could be ahead. So keep an eye out for it. Until then…

He passes Adolph Rupp for 7th most D-1 wins by a head coach. pic.twitter.com/c4OefJegvA

A NICE BOUNCE-BACK FOR TEXAS

The previous week was a lost week for Texas after being beaten like a drum at West Virginia and then losing a close one to LSU at home. The Longhorns needed a bounce-back week and they got one, though they did it by winning two games by a grand total of five points. But, right now, it’s about getting it done, not compiling style points.

Texas beat TCU on the road by a point by holding off the Horned Frogs in a messy final minute with five combined turnovers. Then they had to rally to beat Iowa State at home on Saturday. It’s a well-timed run for Texas, as the pair of wins puts them back to .500 in Big 12 action and gets them closer to 20 overall wins for the season at 14-7. It turns down the heat on head coach Shaka Smart’s coaching seat just a smidge.

But don’t get comfortable, Texas. The next three games will be the toughest stretch of the Longhorns’ Big 12 season — at Kansas on Monday, home against Texas Tech on Saturday and then home against Baylor on the following Monday. If Texas could win just one of those it would be a coup.

On Saturday Kristian Doolittle became the 47th player in Oklahoma history to reach 1,000 points for his career. He only needed two points to reach the mark and he ended up with six against Oklahoma State. He also had 10 rebounds and 7 assists in a game in which forward Brady Manek had 30 points.

“My dad was talking about it earlier in the week to me, so I knew where I stood going in,” he said. “I made it, and Brady came over and slapped my hands and said ‘good job.’ It’s great to get 1,000 points in a win, but even better in Bedlam.”

.@BradyManek was unconscious, @kristiandoolit1 reached 1,000 points and the #Sooners ran past the Cowboys in a big Bedlam win.

The Texas Tech Red Raiders needed a win earlier this week against West Virginia and they got it, beating the Mountaineers, 89-81. While they could have used a road win over Kansas, the Red Raiders fell just short, losing by three points. It’s unlikely the Red Raiders will return to the AP Poll this coming week, and it adds further to the Red Raiders’ inconsistent play, as they’re now 3-5 since their Big 12 season-opening win over Oklahoma State on Jan. 4.

But this might be the last appearance in the ‘Bad’ category for a bit. The schedule opens up for the Red Raiders and offers them a window to stabilize themselves and rack up a few wins.

The next eight games for Texas Tech will come against unranked teams, though it’s the Big 12 so nothing is easy. Two of those games are against Oklahoma, a potential NCAA Tournament team, and two more are against Texas, and the Longhorns are desperate for wins right now.

But after a week in which the Red Raiders shot better, defended better and found some of its slumping players starting to turn a corner, a schedule with opportunity couldn’t come at a better time.

Eight games into Big 12 action and we have Iowa State and Kansas State with identical 2-6 league records. When they meet for the first time this season on Feb. 8 in Ames, Iowa, both teams will be trying to work out whether they can still see a postseason berth in the future.

Kansas State did claim a win this past week, upending Oklahoma at home before traveling to Morgantown and falling to West Virginia. Now three games under-.500, the Wildcats appear pointed toward a losing season, which would be their first under head coach Bruce Weber since the 2014-15 season (15-17). The progress of David Sloan, who had 13 points against the Mountaineers, and DaJuan Gordon, who had 15 points in the first meeting against West Virginia, gives the Wildcats a glimpse of their future. But, it appears the swan songs of Xavier Sneed and Makol Mawien are slumping toward a March without a postseason trip.

Iowa State, meanwhile, has gotten a significant boost from transfer Rasir Bolton, who entered the weekend action averaging 15.4 points per game in Big 12 action, third-best among all players. Teammate Tyrese Haliburton was averaging 14.0 ppg in Big 12 games going into the weekend. So why is Iowa State struggling? The Cyclones are dead last in the Big 12 in scoring defense, giving up more than 73 points per game, and seventh in the Big 12 in 3-point shooting percentage. The Cyclones weren’t the best team defensively last year, but they had the offense to offset it. This year the Cyclones are more than minus-7 in point differential in Big 12 action, so the offense isn’t a fallback when the defense underperforms.

Depending upon what happens in the middle of this week, Saturday’s game may represent each team’s final stand in trying to get back to .500 this season. But with the issues that each team has right now, it’s entirely possible neither of them will get there.

I covered the Oklahoma State-Oklahoma game on Saturday and found myself wondering the same thing you are — what happened to this team? I’ll go more in-depth in a piece I’m working on later in the week, but Cowboys head coach Mike Boynton Jr. talked about the team’s morale problem right now. But there’s so much more to unpack later this week.

How bad is this 0-8 start to league play? Based on my research in the Oklahoma State media guide, the Cowboys have never started 0-8 in league action. The worst start I could find was 0-7.

On Wednesday there is one game on ESPN Plus and Big 12 Now — TCU at Oklahoma State on Wednesday. So if you don’t have the subscription to ESPN Plus, here’s the link. We’ve made it really easy to sign up.