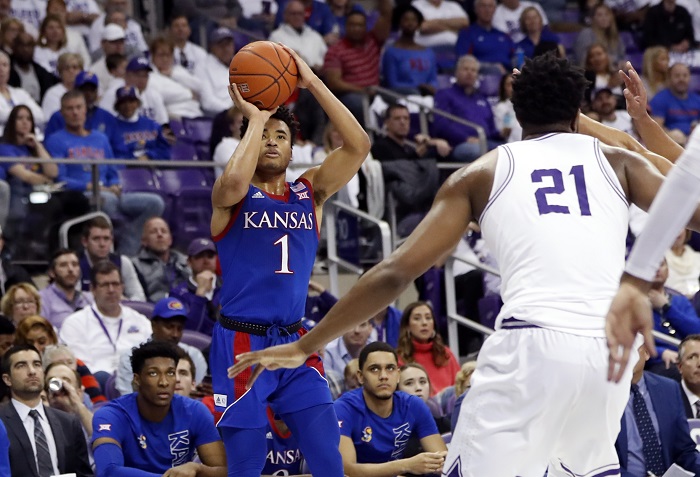 FORT WORTH, Texas — I made my weekly appearance with Miller and Condon on KXNO radio in Des Moines earlier this week to talk Big 12 basketball. During that call I was asked which of the Big 12’s teams had the best chance to go the deepest in the NCAA Tournament, understanding that we still have another six weeks to go and a lot can happen between now and then.

I think I surprised the two of them by saying I felt Baylor and West Virginia had the best chance, and not Kansas. Nothing during Saturday’s game between Kansas and TCU, which the Jayhawks won, 60-46, changed my mind.

My logic for choosing Baylor and West Virginia was based on two factors. First, I think both the Bears and the Mountaineers are deeper than the Jayhawks. Even before the suspensions, the Jayhawks were really only playing eight, and they played just eight players on Saturday. Both the Bears and Mountaineers can get down to their tenth or eleventh players and not lose too much on the floor.

Second, the Bears and Mountaineers have better overall team defenses. The Bears and Mountaineers are consistently stifling, night in and night out. The Jayhawks have some good defenders. Marcus Garrett may be, pound for pound, the best defender at any position in the league. Udoka Azubuike is, obviously, intimidating to anyone who dares to venture into the paint. But there are holes in this defense, not that the Horned Frogs did that great a job of exploiting them on Saturday.

It should be noted that the Bears, the Jayhawks and the Mountaineers are in the Top 3 in the Big 12 in just about every defensive category you could think of. But after watching more than 50 percent of this season’s conference games, my belief is that the Bears and Mountaineers are just better overall when it comes to the overall concept of team defense. I should point out that Kansas did force 17 turnovers and had a near three-minutes stretch when the Jayhawks picked off four cross-court passes and turned them into points on the other end, plays that were critical to keeping their lead.

That said, two years ago, I’m not sure anyone thought the Jayhawks, led by guard Devonte Graham, were a Final Four team, except for Jayhawks fans, of course. And, yet, there they went.

What was clear to me after watching Saturday’s game isn’t breaking news. If the Jayhawks want a deep tournament run, and perhaps a trip to the Final Four, the duo of Azubuike and guard Devon Dotson will have to be front and center. And there’s a part of Kansas head coach Bill Self that agrees.

Azubuike is a back-to-the-basket center who can dunk and take short shots, but has no discernable mid-range game and isn’t a good free-throw shooter. He sets good picks, rebounds well, is a solid defender and shot blocker. But Kansas maximizes what he does well offensively through the use of lob passes, alley-oop passes and isolation plays that allow him to use his size to gain position and score. Against TCU, at times, he was utterly dominant, whether TCU center Kevin Samuel was on the floor or not. TCU chose to single-defend him most of the game and he made them pay for it with 20 points, 15 rebounds and 5 blocked shots, the first time a Jayhawks has done that since Cole Aldrich. As you might expect, nine of Azubuike’s 10 baskets were on dunks.

But a few “little things” stood out. He has a better up-and-under shot fake near the basket and he used that effectively. He’s a better help-and-recover defender off ball screens. He has more maturity under the glass, especially when it comes to knowing when he’s blocked out and shouldn’t go over the back of the opponent. I saw that a couple of times against TCU.

But the biggest takeaway was this. Azubuike’s maturity is more evident than it ever has been, as is his importance to Kansas’ overall interior game. Without him on the floor and with David McCormack on the floor, as much potential as McCormack might have after this season, there was a significant difference. Neither team can ignore Azubuike in the middle. Both teams, at times, can ignore McCormack. That underscores his importance to Kansas’ interior game and potential NCAA Tournament hopes.

Dotson holds similar distinction for Kansas. The sophomore guard — who could declare for the NBA Draft after the season — entered Saturday’s game averaging 18.05 points, best in the Big 12 for the entire season. In Big 12 action Dotson entered the game averaging 16.5 points per game, just behind Oklahoma’s Brady Manek for the top spot. Against TCU Dotson had his own double-double — 18 points and 11 assists.

He declared for the NBA Draft last year, but that was really just to get evaluated and take notes. And he’s taken those notes to heart. Based on the eye test he’s a better overall player in every way from last year to this year.

His scoring percentage is up by nearly six points over last season. So are his per-game averages for rebounds, assists and steals. His shooting percentages from both the floor and from the 3-point line are down from a year ago. But he’s shooting four shots per game more than last year, and some of that was out of necessity as Self sought to fine-tune rotations as league play began. Now that those perimeter rotations appear to have settled down, I suspect Dotson’s overall shooting efficiency could see an uptick.

Dotson, to me, has always felt like a Graham clone — a guard that does everything well, may not roll off your tongue as one of the best guards nationally but comes to play just about every night. From a developmental standpoint, I think he would be wise to return to Lawrence for one more year. But he has all the tools necessary to have a Graham-type run in the NCAA Tournament.

And just as a reminder, here were Graham’s averages from that NCAA Tournament run two years ago — 17.4 ppg, 4.6 rpg, 5.6 apg, 1.4 spg, 38 percent shooting overall and 36.4 percent from the 3-point line. Dotson could absolutely replicate those numbers in March.

If the Jayhawks are playing the second, or even final, weekend of the NCAA Tournament, you’ll know why. It will be thanks to the senior in the middle and the sophomore running the point.