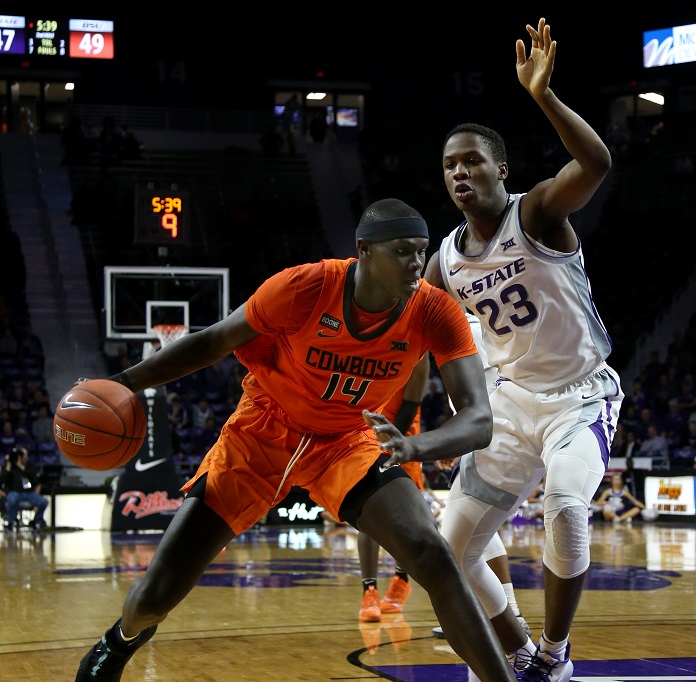 We’re wrapping up Tuesday night’s game for Big 12 men’s basketball and our Matthew Postins broke it all down in our Big 12 Postgame Periscope. The Postgame Periscope is our instant review of each weeknight’s games, with analysis and context for that night’s action and beyond.

Oklahoma State defeated Kansas State, 64-59, on Tuesday night. Both teams were in similar circumstances going into the game, as they had each lost 9 of their last 11 games. But the Cowboys (12-12, 2-9 in Big 12) came away with the victory. Yor Anei led the Cowboys with 15 points, and in the Periscope I talk about my own misperception about how Anei’s season has gone and the uptick that his game has taken.

The Cowboys had three other players in double figures in the contest, but collectively it was their shooting down the stretch that ended up winning the game. I talk about that stretch and how it was able to keep a pesky Kansas State (9-15, 2-9) at bay in the final minutes.

For the Wildcats it was Mike McGuirl off the bench who led them with 16 points. Cartier Diarra added 15 points and Makol Mawien had 11 points. They didn’t shoot well until the final minutes and they were outrebounded by nine.

Wednesday’s games include a clash of ranked teams — No. 3 Kansas at No 14 West Virginia at 6 p.m. CST, followed by Oklahoma and Iowa State facing off at 8 p.m. CST. The Jayhawks and Mountaineers have played once this year, with Kansas claiming the victory. Kansas needs a win to remain within a game of Baylor in the Big 12 standings. West Virginia is seeking to remain undefeated at home and notch a second win against a Big 12 ranked team (the Mountaineers defeated Texas Tech when the Red Raiders were ranked earlier this year).