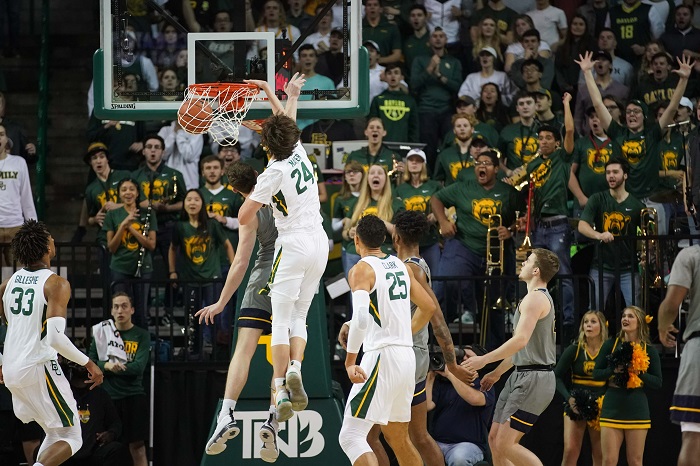 With the 2019-20 Big 12 Men’s Basketball season now in Big 12 play, here are the HeartlandCollegeSports.com power rankings as of Feb. 17.

Next: The Bears are at Oklahoma on Tuesday and then host Kansas on Saturday.

Kansas went 2-0 for the week, with a win at Morgantown being a real feather for the Jayhawks, given that the Mountaineers are ranked and were undefeated at home. Like Baylor, Kansas is undefeated on the road. Can Marcus Garrett sustain the offense (24 points) that he produced against Oklahoma? If he can, look out because Kansas would have another consistent weapon.

Next: Kansas hosts Iowa State on Monday and then travels to Baylor on Saturday.

The Red Raiders split for the week, with a huge win over TCU and a loss at Oklahoma State by three points. Davide Moretti had a consistent week shooting the ball and, overall, the Red Raiders are playing steady basketball. They stay at No. 3 because the Sooners, while they split, lost to Texas Tech a couple of weeks ago. Plus, the Mountaineers went winless for the week.

Next: Texas Tech hosts Kansas State on Wednesday and travels to Iowa State on Saturday.

The Sooners have three players averaging 14 points per game in scoring. Few teams in NCAA basketball can say that. The win over Iowa State was one the Sooners needed. The loss to Kansas was probably expected. This is an NCAA Tournament team that has the tools to do some damage. But for the next couple of weeks, the Sooners may yo-yo a bit in these rankings as rematches with Baylor and West Virginia are ahead.

Next: The Sooners host Baylor on Tuesday and travels to Oklahoma State on Saturday.

Bob Huggins said on Saturday this his team has a “fascination with dribbling.” What he means is they’re not passing enough, among other problems. The loss to Kansas ended the Mountaineers’ undefeated slate at home. The loss on the road to Baylor made them 1-5 on the road in Big 12 action. This team has offensive issues away from home, to the point where I’m starting to wonder how the Mountaineers will handle the neutral sites of the Big 12 Tournament and the NCAA Tournament.

Next: The Mountaineers host Oklahoma State on Tuesday and then travels to TCU on Saturday.

The Cowboys are finally soaring, moving up two spots this week after a 2-0 slate that saw them beat Kansas State and Texas Tech. The Cowboys have now won three of their last four games and have slipped back above .500 for the season. That’s important as we eye March. The Cowboys aren’t a NCAA Tournament team. But perhaps they can sneak into the NIT and get in a game or two in order to develop their younger core of players.

Next: The Cowboys travel at West Virginia on Tuesday and hosts Texas Tech on Saturday.

The Cyclones also move up two spots, even though they split for the week. But the win was a big one, destroying Texas at home. Michael Jacobson had one of his biggest games of the season and ISU sent the Longhorns home with a lot more questions than answers. Their first week without Tyrese Haliburton went well. The team played with a lot of energy and effort.

Next: Iowa State is at Kansas on Monday and hosts Texas on Saturday.

First, can anyone confirm that coach Shaka Smart didn’t get left on the tarmac in Des Moines? The loss to Iowa State was worse than the blowout loss in Morgantown. The Horns have lost seven of their last nine and they are the midst of a nose dive that seemed unrealistic when the calendar turned to 2020. A losing season for Texas might just be the blow that ends Smart’s time in Austin. Two wins this week are absolutely critical.

Next: Texas hosts TCU on Wednesday and travels to Kansas State on Saturday.

TCU ended its six-game losing streak with a win over Kansas State on Saturday. With a record that is three games above .500 and six league games remaining, the Horned Frogs really only need to hold serve in order to remain a borderline NIT team. The only way TCU is going to the NCAA Tournament is if it stuns the world and wins the Big 12 Tournament.

Next: TCU is at Texas on Wednesday and hosts West Virginia on Saturday.

With six games remaining and seven games under-.500, this will unfortunately be the first losing season in Manhattan since the 2014-15 season. The Wildcats could still turn it around, but it would require running the table in the remainder of Big 12 play and winning their first Big 12 Tournament game just to get back to .500. That seems unrealistic at this point.

Next: The Wildcats travel to Texas Tech on Tuesday and hosts Texas on Saturday.Note: Our next full update will come on Feb. 24. Plus, on Friday I’ll post updated Power Rankings on my Twitter feed @PostinsPostcard.