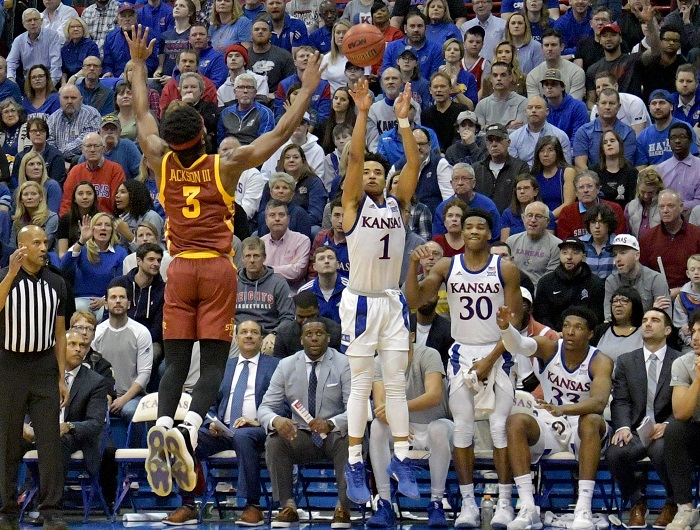 We’re wrapping up Monday night’s game for Big 12 men’s basketball and our Matthew Postins broke it all down in our Big 12 Postgame Periscope. The Postgame Periscope is our instant review of each weeknight’s games, with analysis and context for that night’s action and beyond.

Kansas ran away with this one, beating Iowa State, 91-71, thanks to some incredible shooting all around, as the Jayhawks shot 56.7 percent from the field. That included 12 3-pointers, led by guard Devon Dotson, who scored 29 points with six 3-pointers.

Four other Kansas players were in double figures. But, overall, If the Jayhawks can sustain this type of shooting going into the Baylor game on Saturday, then Kansas has a real shot at defeating the Bears.

At one point in the first half Iowa State scored 27 of its first 35 points on 3-pointers, and it was at that point that Kansas ran away with the game. The Jayhawks went on an 11-2 run to take a 49-37 lead late in the first half. The Cyclones never got any closer.

The Cyclones shot 47.8 percent from the 3-point line. But it wasn’t nearly enough against the Jayhawks.

Prentiss Nixon scored 20 points to lead Iowa State, including four 3-pointers. Michael Jacobson had another fine game, with 13 points, 8 rebounds and 5 assists. Rasir Bolton ended up with 12 points and 6 assists.

On Monday the new AP Top 25 poll came out and Baylor remained No. 1 in the country, with Kansas remaining at No. 3. West Virginia dropped three spots to No. 17 and Texas Tech dropped out the poll after the loss to Oklahoma State. But, the Red Raiders garnered 96 votes and are basically No. 26 in the nation.

Check back in here at HeartlandCollegeSports.com for the breakdown of Tuesday’s games with a pair of contests — Oklahoma State at West Virginia and Baylor at Oklahoma.