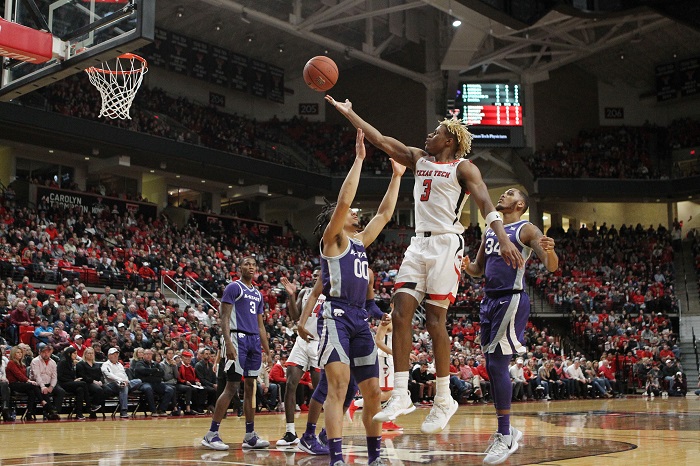 Texas Tech and Texas took victories in Big 12 men’s basketball action on Wednesday night, as the weeknight cycle of games came to an end for this week.

Texas Tech (17-9, 8-5 in Big 12) defeated Kansas State (9-17, 2-11), 69-62, in Lubbock, Texas, burnishing the Red Raiders’ NCAA Tournament credentials. Tech has now won four of its last five games. The Red Raiders had another solid shooting night at home, making 50 percent of their shots, including a 38 percent clip from the 3-point line. Davide Moretti poured in 18 points, including four 3-pointers, while Kyler Edwards had 14 points and Jahmi’us Ramsey had 17 points.

Kansas State lost its sixth straight game despite a solid shooting night from the floor (47.9 percent), but the Wildcats lagged behind at the 3-point line, where they shot just 23.5 percent. Xavier Sneed led with 15 points while Cartier Diarra added 10 points.

Texas snapped its four-game losing streak with a 70-56 win over TCU on Wednesday night. Both teams needed the win, but the Longhorns (14-11, 5-8 in Big 12) came away with the win, thanks in large part to a bench weapon that hasn’t been a weapon at all this season — freshman center Will Baker.

Baker ended up with 21 points against TCU (14-12, 5-8), including an 8-of-12 night from the floor and four 3-pointers. How stunning was this? Entering Wednesday’s game Baker had scored 15 total points and had one 3-pointer. Wow. An incredible night from the centerpiece of Shaka Smart’s most recent recruiting class. It was long overdue.

But this was not a good look for Texas at all.

Under 10 minutes on the pregame clock at the Erwin Center before Texas takes on TCU at the top of the hour. pic.twitter.com/RFEgv891SR

TCU, which is trying to stay above .500, ended up losing its seventh game in its last eight tries. Four players ended up in double figures, including Desmond Bane, had 13 points to lead the Horned Frogs. Jaire Grayer had 11 points, and Kevin Samuel had a double-double with 11 points and 12 rebounds. R.J. Nembhard had 10 points. But the Frogs, overall, didn’t shoot nearly as well as needed (41.5 percent from the floor, 16.7 percent from 3).

All 10 Big 12 teams will be in action on Saturday, with the key game taking place in Waco, Texas, as No. 1 Baylor hosts No. 3 Kansas at 11 a.m. CST with ESPN’s College Gameday on site.

Interview: Matt Wells Looks Back on 2019 and Looks Ahead to 2020
The Heart Beat (Feb. 20th): Matt Campbell’s Interview, James Lynch’s Good Cause
To Top