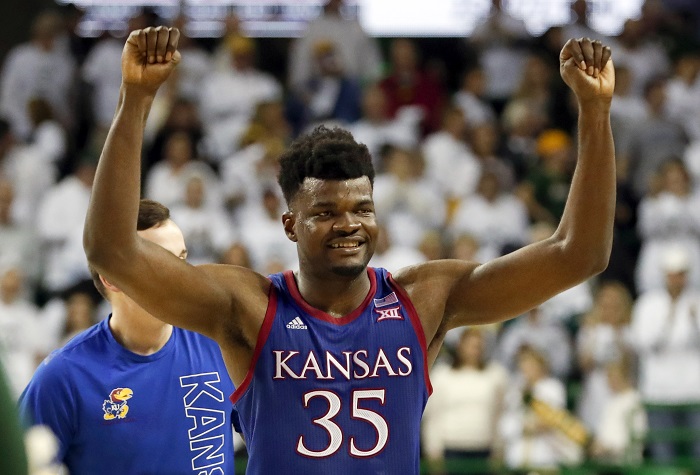 The eighth week of Big 12 basketball action saw Kansas take the showdown with Baylor, Texas go 2-0 and Oklahoma take a slide. Here is this week’s Good, Bad and Ugly for Big 12 men’s basketball.

BAYLOR BRINGS IT FOR GAMEDAY

ESPN took its College Gameday preview shot to Waco, Texas, for the second time in a few months this academic year, though this time it was for Saturday’s great showdown between No. 3 Kansas and No. 1 Baylor at the Ferrell Center. As you might expect the locals brought it. Baylor made it a white-out game and just about everyone obliged. Baylor head coach Scott Drew got some interview time with ESPN about an hour before the game. Baylor forward Freddie Gillespie got a feature, too.

Baylor’s local bear, Scout, got some face time as well.

Also on hand was Baylor women’s coach Kim Mulkey, who just recently recorded her 600th career win, making her the fastest coach, male or female, to reach that milestone. During her interview with ESPN’s Holly Rowe, she made it clear what she’s hoping for from the Bears this season.

"You see those four national championship banners over there? I want Scott Drew to get one of those so bad." #SicEm women's head coach Kim Mulkey during #CollegeGameday #Big12MBB #KANvsBAY

Just as a point of clarification. The Lady Bears have three national titles, but have four banners hanging on that side of the arena, the fourth being a Final Four appearance that didn’t lead to a title.

It was a tremendous day in Waco on Saturday, regardless of the result. Baylor did little to diminish its standing as one of the nation’s elite teams, aside from losing the game. When the new poll comes out on Monday I suspect Kansas will be No. 1 and Baylor will probably drop no more than No. 3 (we will have to see what the voters do since No. 2 Gonzaga lost as well). And they’ll meet again. Bank on it.

FOR THAT MATTER, THE KANSAS-BAYLOR GAME LIVED UP TO THE HYPE

Kansas won the game, of course, 64-61, thanks to a huge afternoon by center Udoka Azubuike. Here’s my game story so you can give it a read. But one thing to consider is that if these two teams win out, they’ll finish the season with a shared Big 12 title and they’ll finish the season with pristine road records in Big 12 action. Yes, they each beat the other on the road.

OKLAHOMA STATE’S FIGHT FOR THE NIT

Barring a complete running of the table in the Big 12 Tournament, the Oklahoma State Cowboys’ postseason hopes rest on securing an NIT berth. Saturday’s Bedlam win over Oklahoma certainly helped.

The Cowboys (14-13, 4-10) have now won four of their last six Big 12 games, and that includes a win over a then-ranked Texas Tech last week. Ever since the Cowboys put a greater emphasis on playing Cameron McGriff inside and using their younger players off the bench more often, the Cowboys seem to have found a groove.

But can they maintain that groove for the final four Big 12 games. Let’s handicap a bit.

At Kansas on Monday. Ehhhh… probably not. But perhaps the Cowboys can catch the Jayhawks sleeping after their huge win over Baylor 48 hours earlier. But this is likely a loss.

At home against Iowa State on Saturday. A win here is absolutely critical. The same goes for the following home game against Kansas State.

The swing game might be that season finale with Texas in Austin two Saturdays from now. Texas will likely be desperate for the win. So will the Cowboys.

What if the Cowboys win three of their final four, which seems possible? That would be a 17-14 record going into the Big 12 Tournament. There would be no way the Cowboys could fall below .500 and there might be enough on that resume to get them into the NIT, which frankly would be a huge win after that 0-8 start to Big 12 action.

THE OTHER GOOD FOR THE WEEK

Texas Tech won both of its games this week and rather convincingly at that, and now the Red Raiders have won five of their last six games. Tech needs to be ready this week as they face Oklahoma and Texas, both of which are desperate for wins for different reasons. TCU, meanwhile, grabbed a big win for itself by upsetting ranked West Virginia on Saturday. The Horned Frogs are now 15-12 this season and have won two of their last three games after a horrid stretch in Big 12 action. Texas won both of its games this week, defeating TCU and Kansas State, taking its overall win total to 16 games this season and bolstering its case for NCAA Tournament consideration. At 16-11, I think the Longhorns are a lock for the NIT. But Shaka Smart’s job security hinges on the NCAA Tournament, and my network of alumni and fans tell me that if Smart can’t get the Longhorns back to the NCAA Tournament and win a game, they want him gone.

The Sooners picked a bad time to lose three in a row, with the end of the Big 12 slate, the Big 12 Tournament and the NCAA Tournament all looming. The Sooners fell hard to Oklahoma State on Saturday, ending a three-game stretch in which the Sooners also lost to No. 1 Baylor and No. 3 Kansas. So, yes, we can forgive the Sooners for the losses to KU and BU. But the loss to Oklahoma State? Even on the road, falling by more than 20 points is … not … good.

Before the Oklahoma State game ESPN’s Joe Lunardi had Oklahoma as a 10-seed. The Sooners weren’t on the bubble, but this 0-2 week means they might be closing in on being a part of that bubble.

Is that where the Sooners are headed? Let’s look at their last four games.

Home against Texas Tech? Not the best time to face a team with five wins it its last six games.

At West Virginia? The Sooners won their meeting in Norman, but the Mountaineers have been hard to beat at home. Only Kansas has done it.

Home against Texas and on the road against TCU in the final week? This is where the Sooners can make up some ground, no matter what happens against the Red Raiders and Mountaineers.

At this point I still believe the Sooners are an NCAA team. But they’re certainly teetering.

As for what’s causing the slide, the Sooners’ big three — Kristian Doolittle, Brady Manek and Austin Reaves — aren’t firing at the same time. For instance, against Oklahoma State, Reaves had a huge game, scoring 24 points. Doolittle had 11 points, but Manek only had 2. Lately, defenses are taking at least one of those options away and it’s hurting the Sooners.

HOW MUCH FARTHER WILL WV FALL?

West Virginia had a chance to bolster itself a bit more when it came to the NCAA Tournament against TCU on Saturday. The game, on the road, ended up being an overtime loss for the Mountaineers. The road in the Big 12 has been a house of horrors for the Mountaineers, with just one win away from WVU Coliseum. Before the game the Mountaineers were considered a No. 4 seed by Joe Lunardi at ESPN. I’m wondering if they might drop another seed line when the updates come out in a day or two.

Since the win over Mizzou in the Big 12-SEC Challenge, the Mountaineers are 3-5, with all three wins coming at home and all but one win coming on the road. If that’s the formula the rest of the season, then expect the Mountaineers to have a .500 finish, with road games at Texas (on Monday) and Iowa State, along with home games against Oklahoma and Baylor. The caveat is, of course, Baylor, which will be ranked going into that season finale. The Mountaineers’ one home loss was to No. 3 Kansas.

None of this will impact West Virginia making the NCAA Tournament, in my opinion. It’s now a matter of seeding.

THE OTHER BAD FOR THE WEEK

Iowa State came up with an 0-2 week, falling to No. 3 Kansas and to Texas Tech. In those two games the Cyclones lost by a combined 50 points. If there’s good news it’s that three of their last four games are winnable — TCU, at Oklahoma State and at Kansas State. But after destroying Texas at home last weekend, the Cyclones didn’t sustain that momentum.

I noted last week that Kansas State was just about on its way to its first losing season under head coach Bruce Weber since the 2014-15 season. Well, we’re here. Here’s the math. Even if the Wildcats were to win their final four games of Big 12 action, and win all four of their Big 12 Tournament games (I think they would be certain to be one of the lowest four seeds, even with four straight wins), it would still only lift the Wildcats back to 17-18 (although, to be fair, it would be one heck of a story). Yes, I know a run like that would clinch the Wildcats a NCAA Tournament berth, but the Wildcats would have to win an NCAA Tournament game just to get back to .500. And I doubt they would be a favorite in that situation.

Could the Wildcats even mount that kind of a run? That seems crazy at this point, especially when you consider their next game is against Baylor.

This has become the worst season under Weber at K-State. The previous worst was that 2014-15 season, in which the Wildcats won just 15 games.

Kansas State faces Baylor on Tuesday on ESPN Plus this week. And you know that ESPN Plus and Big 12 Now also has baseball, softball and women’s basketball streaming, right?. So, if you don’t have the subscription to ESPN Plus, here’s the link. We’ve made it really easy to sign up.