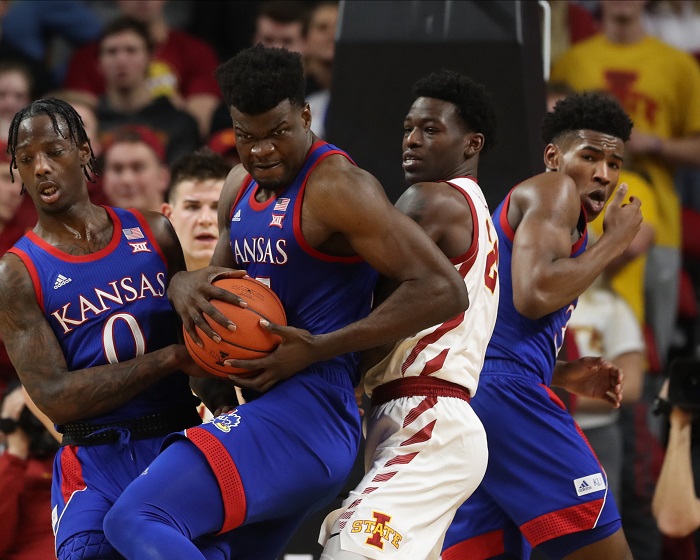 With the 2019-20 Big 12 Men’s Basketball season now in Big 12 play, here are the HeartlandCollegeSports.com power rankings as of Feb. 24.

Well, you beat No. 1 and you have to move up, right? That’s what Kansas did on Saturday at Baylor. There is a lot of talk about Udoka Azubuike and Devon Dotson and for good reason. But don’t overlook Marcus Garrett. While he doesn’t score double figures every night, he’s turned into a co-ball handler and glass crasher who is producing some of the best night-to-night lines in the conference.

Next: Kansas hosts Oklahoma State on Monday and then travels to Kansas State on Saturday.

Baylor finally lost for the first time since the first weekend of the regular season. It was an incredible streak. This is still one of the best teams in the nation and one that is capable of reaching a Final Four. Give MaCio Teague a bit of time to shake the rust off after a two-game layoff and the Bears will be at full strength. The only thing that really hurts them at this point is the occasional bad shooting night.

Next: The Bears host Kansas State on Tuesday and then travel to TCU on Saturday.

The Red Raiders have won five of their last six games and appear to have cemented their place in the NCAA Tournament. Jahmi’us Ramsey is now one of the most consistent players in the Big 12. The Red Raiders have one more week to, potentially, feast on what most would consider to be lesser competition before a gauntlet of a finish to Big 12 action against Baylor and Kansas.

Next: Texas Tech is at Oklahoma on Tuesday and hosts Texas on Saturday.

I’m sliding West Virginia up a spot this week as Oklahoma continues to slide and the Mountaineers had a 1-1 week. West Virginia couldn’t solve its road woes after losing to TCU on Saturday. But, the lineup changes that Bob Huggins made are starting to agree with the Mountaineers. Moving Miles McBride and Taz Sherman into the starting lineup gives WVU more outside shooting. Moving Derek Culver back to the bench has the potential to make him a bit more dangerous.

Next: The Mountaineers travel to Texas on Monday and then host Oklahoma on Saturday.

How much of this is quality of play and how much of this is recency bias? That’s the question I wrestled with. When I saw OU and OSU play in the first Bedlam meeting, I thought there was no way OSU would move this far up my power rankings. But here we are. Since that first Bedlam game Oklahoma State is 4-2 and Oklahoma is 2-4, including losses in each of the Sooners’ last three games. The Sooners’ third straight loss, to Oklahoma State, is what clinched it for me. Right now, OSU is playing better and, at least for this week, sneaks into my Top 5.

Next: The Cowboys travel to Kansas on Monday and then host Iowa State on Saturday.

Give Texas this — they showed some fight this week, beating TCU and Kansas State, the latter of which was on the road. Now, frankly, these are teams that the Longhorns should be beating. But with Oklahoma’s free-fall out of my Top 5, that helps Texas move back into the Top 6 — at least for this week. Shaka Smart’s job is, still, by no means safe. And the next two games won’t be easy.

Next: Texas hosts West Virginia on Monday and travels to Texas Tech on Saturday.

The Sooners need a turnaround and soon. As noted in the Oklahoma State paragraph, they’re on a three-game losing streak and their NCAA Tournament hopes are starting to feel like they’re in a bit of jeopardy. Also, they’re fighting to stay out of the first day of the Big 12 Tournament, and with a bunched-up crowd for the No. 7 spot, anything can happen.

Next: The Sooners host Texas Tech on Tuesday and travel to West Virginia on Saturday.

TCU has now won two of its last three games, and the overtime win against West Virginia is a solid way to telling either the NCAA or NIT Tournament committees that you’re worthy of a postseason invitation. But the Horned Frogs still have a ways to go.

Next: TCU is at Iowa State on Tuesday and hosts Baylor on Saturday.

The Cyclones fall two spots after losing two games last week by a combined 50 points. There isn’t much else to say at this point.

Next: Iowa State hosts TCU on Tuesday and travels to Oklahoma State on Saturday.

It would take a miracle for the Wildcats to reach the NCAA Tournament, and I outlined that in my Good, Bad and Ugly piece. Head coach Bruce Weber should spend the next four games, plus the Big 12 Tournament, doing whatever he can to develop his younger players for next season.

Next: The Wildcats travel to Baylor on Tuesday and then host Kansas on Saturday.

Note: Our next full update will come on March 2.

Big 12 Basketball Week 8: The Good, the Bad and the Ugly
Jayhawks Keep Rolling, Texas Gets Revenge on Big Monday
To Top