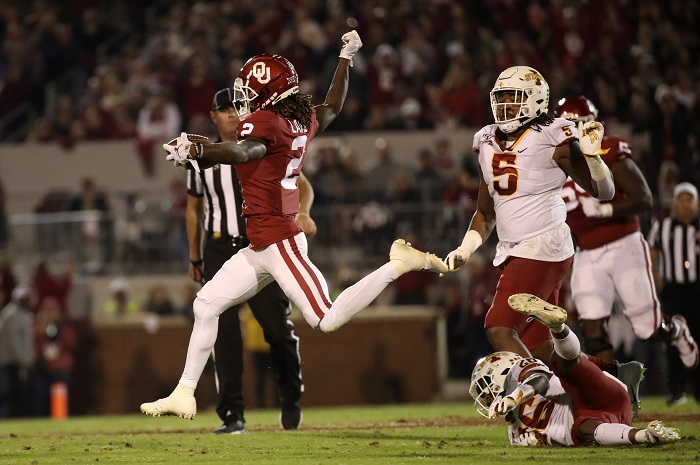 As CeeDee Lamb gets set to try and be the top wide receiver selected in the 2020 NFL Draft, Pro Football Focus is making a comparison between Lamb and Houston Texans star DeAndre Hopkins.

Lamb declared for the NFL Draft late last year and since then his stock has continued to rise.

Pro Football Focus wrote, “Both Lamb and Hopkins have ball skills that are as good as it gets for the position. It’s not only the highlight-reel catches, but also the way they attack the ball in contested situations. Then, with the ball in their hands, both are likely to make multiple defenders miss on any given play. Hopkins had a little more strength coming out, while Lamb probably has a little more speed.”

PFF notes that both wide receivers are great at going up and getting the ball on contested throws.

Coming out of Foster High School in Richmond, Texas, Lamb was a four-star prospect who picked the Sooners over schools including Alabama and Texas. Lamb made an immediate impact as a true freshman, with 46 catches for 807 yards and seven touchdowns, which broke the freshman receiving record at Oklahoma. He was named an All-Big 12 Honorable Mention for Offensive Freshman of the Year and selected as a freshman All-American by ESPN.

In 2018, he caught 65 passes for 1,158 yards and led the Sooners with 11 touchdowns, earning second-team All-Big 12 honors. He joined Marquise Brown to become the first duo at OU to each record 1,000 receiving yards in a season.

This year, Lamb went for 1,327 receiving yards on 62 catches with 14 touchdowns. He was a first-team All-Big 12 selection and his 21.4 yards per catch ranked third in the nation behind Geraud Sanders of Air Force and Stanford’s Simi Fehoko.