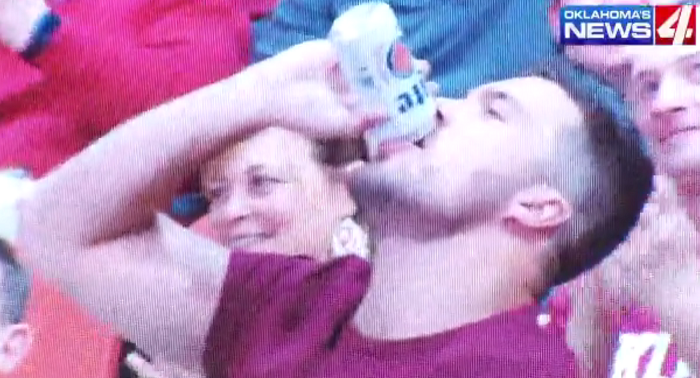 As the Oklahoma Sooners were taking on the Texas Longhorns on Tuesday night in Norman, there was a good crowd for the basketball edition of the Red River Rivalry.

While OU ended up losing the game on the buzzer beater by Matt Coleman, there was some fun had in the stands.

Former Oklahoma Sooners QB Blake Bell, who is now with the Kansas City Chiefs as a tight end, was at the game and did a “Horns Down” and then chugged his Miller Lite in the the stands. Well the big screen then panned to OU head coach Lincoln Riley, who responded with a chug of his own…. of water.

We had a good ole fashioned #Sooners drink off on the big screen at the LNC. Blake Bell (@B_Bell10) chugged a beer then @LincolnRiley followed up with a water. 😂 pic.twitter.com/tENzFwa7cJ

How about we get to spring practice already so we can see Lincoln Riley drinking a water bottle on the field in Norman instead of in the basketball arena?

The good news is that OU opens up spring camp on next week and like we’ve done with TCU and Texas Tech, we will have a spring preview coming in the next few days for the Sooners.