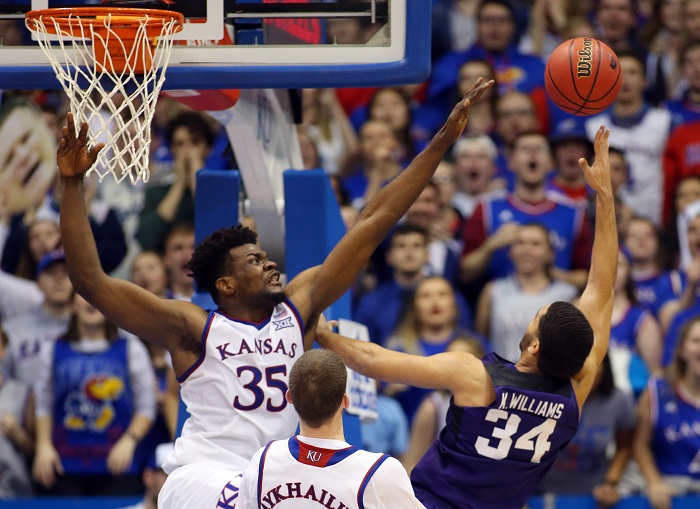 A month ago, Baylor and West Virginia looked like the two Big 12 teams most likely to make a deep March Madness run. They might still do. That being said, Kansas might just make the deepest run of all—a run that will net the Jayhawks their 6th National Championship.

Yes, the Jayhawks have emerged as a contender, and that’s largely thanks to big man Udoka “Doke” Azubuike. Sports Reference reports that Doke had a great February, averaging 14.8 points, 12.6 rebounds, and 2.8 blocks through to February 24. Across the season he has been impregnable on defense, shutting down everyone and even moving his feet on high pick-and-rolls. His offense is still fairly limited, but his ferocious rim-running and relentless offensive rebounding are near-unstoppable. He has also gotten better at sealing his man at the post, catching lobs, and flushing it down (it’s no wonder why he is shooting an absurd 74.4% on field goals).

Doke was at his dominant best in that February 20 rematch with Baylor, which Kansas won, 4-61. In that game, Azubuike scored 23 points (11-13 from the field, mostly dunks) and hauled down 19 boards, on top of 3 blocks. It was a performance that likely solidifies Azubuike as a lottery pick in this year’s NBA Draft in June. It’s not hard to see why, as the bruising big man is the real deal: a 7-foot physical specimen with elite athleticism, an incredible work ethic, and the ability to learn quickly. Azubuike has the makings of an elite finisher, just like reigning MVP Giannis Antetokounmpo. The Greek Freak, according to a Bwin infographic, that compares the 2020 All-Star Game team captains has been an All-Star twice already, and that’s in part due to his spectacular ability to finish at the basket. Azubuike is showing flashes of that same ability. It has made him a handful in the college game, and will come in handy as he transitions to the big league soon.

But the NBA can wait. For now, Doke is working towards bringing the NCAA championship back to Allen Fieldhouse. But to be clear, Azubuike isn’t the best player in the nation (that might be Georgia’s Anthony Edwards). He isn’t even the best player on his team–that would be combo guard Devon Dotson. But Azubuike is arguably the best big man in the NCAA right now: a difference-maker with his defense, rebounding, and rim-running.

Put simply, a dominant Doke makes the Jayhawks difficult to beat. He anchors a stingy, eight-ranked defense (only 60.6 points per game allowed), as he emboldens his team to play an aggressive D. That’s because they know that the big man has got their back, and is always ready to help out. Azubuike’s post seals and hard cuts on offense, on the other hand, force opponents to collapse in the paint, opening the floor for Kansas’ guards, particularly Dotson, Ochai Agbaji, and lately, sixth man guard Isaiah Moss. This synergy gives coach Bill Self arguably the best, most dynamic inside-outside attack in the nation, and that will be crucial to Kansas’ title aspirations.

The Jayhawks are now the number 1 ranked team in the nation. That’s mainly due to the dominance of Doke, who is looking to punctuate his final year with a National Championship. But he’ll need to continue his dominant ways for that to happen, and he seems ready for the challenge.