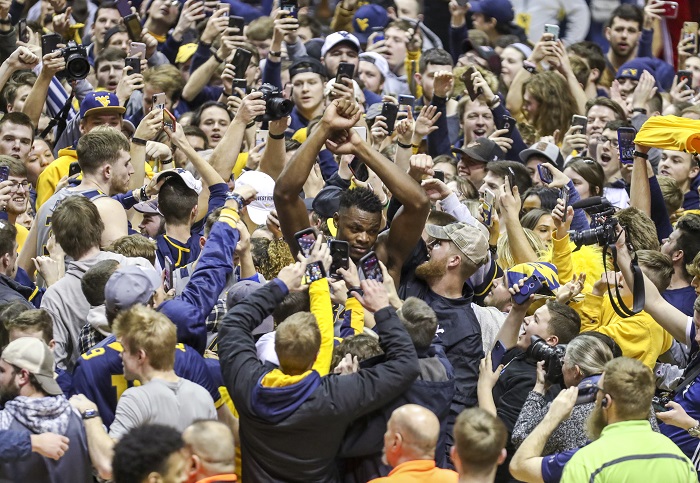 The final week of Big 12 basketball action saw Kansas secure the Big 12 regular season title, Oklahoma State score a big upset and Texas Tech continue its slide. Here is this week’s Good, Bad and Ugly for Big 12 men’s basketball as we prepare for the Big 12 Tournament next week in Kansas City, and you know myself and Pete Mundo are going to be there.

BACK TO DEATH, TAXES AND KANSAS

Sorry, I didn’t know how to convey a bit of sarcasm in print. As you’re probably aware, Kansas had its streak of 14 straight regular-season Big 12 titles snapped last season when Kansas State and Texas Tech shared the title, leaving Kansas out in the cold. Well Kansas is back on top after that one-year absence and I suppose the folks in Lawrence, Kansas, are saying to themselves, ‘All is right with the world.’ Everyone else in the Big 12? Probably less kind words?

Hey it’s the Jayhawks. If you’re not a KU person you probably don’t like them anyway. But let’s respect this team for just a minute. Guard Devon Dotson and center Udoka Azubuike have had incredible seasons. Marcus Garrett, Ochai Agbaji and David McCormack have emerged as consistent contributors. Christian Braun has the look of a player with a double-digit scoring average in his future. Isaiah Moss has, from time to time, given the Jayhawks a real boost from the 3-point line. This team isn’t terribly deep, but it’s the No. 1 team in the nation and Kansas won its final 16 regular-season games. Bill Self has done a tremendous job in just staying the course with this team.

Kansas will be the No. 1 seed in the Big 12 Tournament next week in Kansas City. It SHOULD be the easiest road to the Big 12 title game. But, this is the Big 12. No roads are easy.

Now comes the Big 12 Tournament, where they can build some more momentum going into the NCAA Tournament.

Big 12 players are finalists for the following awards:

The Cowboys wrapped up a nice run to end the regular season, beating red-hot Texas on the road on Saturday. With the win OSU won eight of its final 13 games of the regular season (including its current three-game winning streak), meaning that the Cowboys will go into the Big 12 Tournament with a record that is three games over .500. That’s a huge turnaround for a team that started the Big 12 season 0-8. Now, the Cowboys seem capable of reaching the NIT, no matter what happens in Kansas City. A hat tip to head coach Mike Boynton and his team, which pulled back from the abyss of what was looking like a losing season and now seems pointed toward some sort of postseason play. It was a great turnaround job in the final half of the Big 12 season.

The Kansas State Wildcats finally snapped their Big 12 losing streak with a victory over Iowa State on Saturday. That was a 10-game losing streak before they dominated the Cyclones. It’s not much solace at this point, but at least the Wildcats avoided their first season with fewer than 10 wins since the 1999-2000 season.

IT’S NOT ALL ROSY IN LAWRENCE

You may remember way back in September that the Kansas athletic department received a letter that basically said, “Y’all in trouble.”

When we were in Kansas City for Big 12 Media Days Kansas head coach Bill Self avoided the topic as best he could by reading a statement in response to a question from ESPN’s Paula Lavinge about the allegations. Since then, crickets.

Until earlier this week, when the school responded to the allegations, saying that “The University formally challenges each of the men’s basketball related allegations in the Amended Notice of Allegations (“ANOA”) as neither NCAA legislation nor the facts support the enforcement staff’s allegations.”

The allegations? Three Level 1 violations against the basketball program, along with a responsibility charge against Self and a lack of institutional control charge. These allegations were in connection to the FBI’s investigation into corruption in college basketball. KU and Self became tied into the investigation when former Adidas consultant T.J. Gassnola testified he had been involved in funneling money to the mother of former KU basketball player Billy Preston and to the guardian of current KU basketball player Silvio De Sousa. The allegations include payments of $90,000 to Preston’s mother and $2,500 to De Sousa’s guardian, although there had been discussions of upward of $20,000.

In response? Along with four different documents, released by KU, the athletic department said that “there is no reasonable conclusion that members of the University, including the men’s basketball staff, knew or should have known about any violations of NCAA rules. Head Coach Bill Self had no knowledge of any NCAA rules violations or illicit conduct exhibited by Adidas, its employees or its consultants.”

This was the response I expected from Kansas — complete denial. And we are nowhere near the end of this, either. The NCAA has to respond next, and then a hearing date will likely be scheduled. In other words, none of this will interfere with Kansas’ NCAA Tournament run.

Whether it has any impact on Self and his program’s future remains to be seen. But Kansas fired its shot back at the NCAA this week, that’s for sure.

During our HeartlandCollegeSports.com radio show, Heartland Sports Weekly, our Pete Mundo asked me how many Big 12 teams could make the NCAA Tournament. I told him five. Here was my logic:

Baylor and Kansas are likely to be No. 1 seeds, especially if both get to the Big 12 Tournament final.

Texas Tech and West Virginia are locks to make it, in my opinion. I know there is some talk about Texas Tech not making it. But I think they’ve shown they’re a quality team this season and that they are among the best 68 in the nation. The Red Raiders may end up in Dayton in a play-in game, but I think they’ll make it. West Virginia should be a solid seed no matter what happens.

Then it comes down to Oklahoma and Texas, and as I told Pete the Longhorns’ last-second win over Oklahoma earlier this week may put the Longhorns over the top, especially if they keep this hot streak up (the Longhorns lost to Oklahoma State on Saturday, cooling them off quite a bit). But Oklahoma has bounced back a bit after a three-game losing streak in February and rallied to beat TCU on Saturday.

But, you know what? I might be wrong. Both Oklahoma and Texas might just get in after all.

ESPN’s Joe Lunardi has been stubborn about Texas when it comes to his Bracketology, keeping them out of the field. That changed this week as Lunardi not only moved Texas into the field as a No. 10 seed, but also slid the Longhorns up to his last four byes, which means, for now, they’re off the bubble. Lunardi also has OU in as a No. 10 seed and off the bubble. CBSSports.com’s Jerry Palm has OU and Texas in the tournament, but has Texas (and, for what it’s worth, Texas Tech) on his bubble.

But there is one more week to go in Kansas City, and both the Sooners and Longhorns could use at least one more win to solidify their chances for March Madness. It doesn’t take much for the bubble to burst this time of the year.

Texas saw its five-game winning streak snapped by Oklahoma State on Saturday, a bit of a surprise considering the game was in Austin and the Longhorns have been red-hot. Now Texas heads for the Big 12 Tournament and, while it avoids action the first day, it still needs one more win to reach 20 wins for the season. Will that be enough for Texas to reach the NCAA Tournament and, in turn, for Shaka Smart to keep his job? I think it will. But ask me again after the Big 12 Tournament. That could be the deciding factor.

TECH’S SLIDE DOWN THE STRETCH

I know I just wrote that I feel Texas Tech is a solid NCAA Tournament team, but I don’t have a vote and this slide down the stretch is going to be closely examined by the NCAA Tournament committee. Tech lost its last four games, and five of its final seven games, losing all five of those games to teams that have winning records as of today. One win in the Big 12 Tournament may just do it for the Red Raiders, but they could be sweating it out next Sunday.

AND FOR THAT MATTER, BAYLOR

Meantime, you can check out the full Big 12 Tournament schedule here.