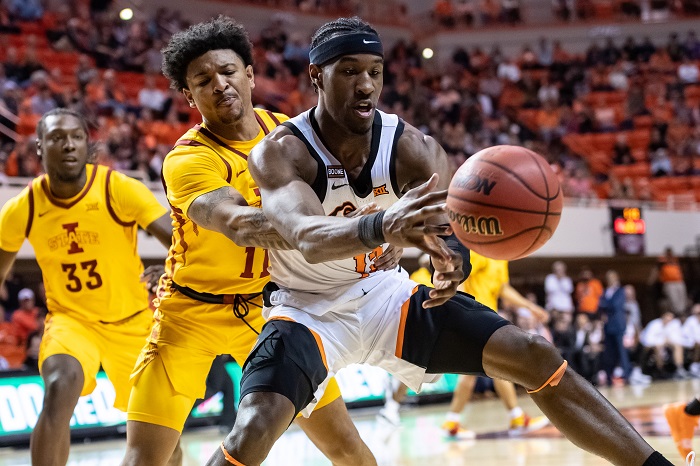 The Big 12 Men’s Basketball Tournament begins on Wednesday at the Sprint Center in Kansas City. HeartlandCollegeSports.com will be there for the entire event. Today we preview the first game of the tournament — Iowa State vs. Oklahoma State.

Iowa State: Young. The senior has pieced together a solid run in the season’s final nine games, averaging 14.2 points and 4.3 rebounds as the Cyclones head to Kansas City. While the Cowboys may have a taller player in Anei, the Cyclones have perhaps the most physical player on the court in Young, who has added scoring acumen to his bruising style inside.

Oklahoma State: McGriff. The senior forward has been one of the most consistent players in the Big 12 the six weeks, as he’s averaged 15.7 points and 6.8 rebounds per game. The Cowboys put a bigger emphasis on playing McGriff inside and letting him create underneath the 3-point line, and it’s paid off, not just for him but for the Cowboys.

Iowa State: It’s been a rough final month for the Cyclones. First, they lost their leading scorer Tyrese Haliburton, to a wrist injury (the assumption is that Haliburton will leave after the season and declare for the NBA Draft, as he’s considered a likely lottery pick). Then, the Cyclones’ second-leading scorer, Rasir Bolton, suffered a head injury last Tuesday and went into the concussion protocol. He missed Saturday’s finale against Kansas State, a game the Cyclones lost. It wasn’t clear as of Monday if Bolton would return for the Big 12 Tournament. Overall, the Cyclones enter Kansas City with a 3-10 record since they faced Auburn in the Big 12-SEC Challenge on Jan. 25.

Oklahoma State: The Cowboys started the Big 12 season on the worst streak of any team in the league, losing its first eight games (only a win over Texas A&M in the Big 12-SEC Challenge interrupted the streak). Then, after that, the Cowboys slowly started coming around, breaking the streak with a win over TCU on Feb. 5. Since then, the Cowboys have gone 7-3, ending that stretch with three straight wins over Iowa State, Kansas State and Texas. The Longhorns were one of the hottest teams in the conference before the loss, having won five straight games going into the Oklahoma State game.

Who wins?: This is a game between two teams headed in two different directions. Oklahoma State, now three games over .500, has its eyes on an NIT berth, and a win on Wednesday might help solidify the Cowboys’ resume in the eyes of that committee. The relatively minor tweak of moving guard Thomas Dziagwa out of the starting lineup and back to the bench has paid off as much as re-emphasizing McGriff underneath. Iowa State, meanwhile, is headed nowhere, and if Bolton is unable to play the Cyclones will have to try and pull off the upset without their top two leading scorers. Oklahoma State should pull off the win in the tournament opener, setting up a shot to try and upset the tournament’s No. 1 seed in Kansas.

Here is a full look at the Big 12 Tournament schedule for the week.