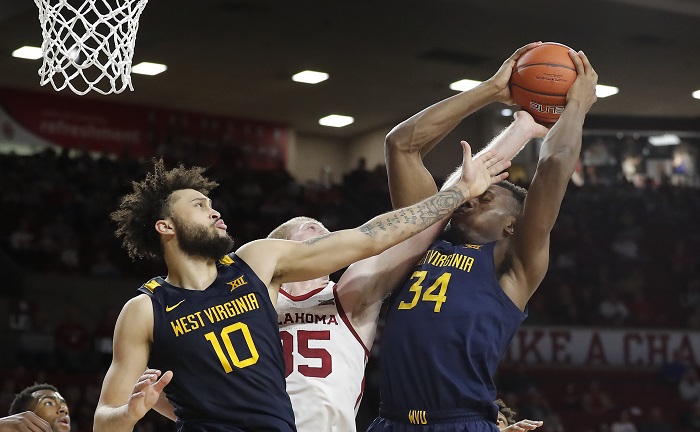 The Big 12 Men’s Basketball Tournament continues Thursday at the Sprint Center in Kansas City. HeartlandCollegeSports.com will be there for the entire event. Today we preview the last game of the Thursday evening session — Oklahoma vs. West Virginia.

Winner gets: a Friday semifinal game at 8 p.m. CT.

Oklahoma: Doolittle. He’s one of those players that you know is going to get his points, rebounds and assists, and no matter what you try to do to keep him from getting them, he gets them anyway. A part of our Heartland College Sports All-Big 12 First Team, Doolittle finished the season averaging 15.8 points, 8.9 rebounds and 2.0 assists per game. Doolittle had 10 double-doubles, 14 games of 10 or more rebounds, 23 games of 10 or more points and 7 games of 20 or more points. He was the model of consistency for this team, and if they make a run in the Big 12 Tournament and beyond it will be on his shoulders.

West Virginia: Tshiebwe. You had to put the weight of reaching the semifinals on a freshman’s shoulders, but the former McDonald’s All-American has been the most consistent player for the Mountaineers this season, finishing with 11.2 points and 9.3 rebounds per game. He was an easy call to claim a spot on our Heartland College Sports All-Big 12 awards. What’s been remarkable about watching him play is his maturity. Even if the game isn’t going his way, he keeps working. Some of Tshiebwe’s best games this season have come when the points aren’t there, but the rebounding and the defense remains consistent. But they’ll need his scoring on Thursday night.

Oklahoma: The No. 3 seed? Interesting. Going into the season the Sooners were selected No. 8 by the coaches. After a three-game losing streak in February, which included losses to Kansas and Baylor, the Sooners looked like they might be headed to the NCAA Tournament bubble. But, the Sooners rebounded to win three of their final four, including back-to-back wins over Texas Tech and West Virginia. That season sweep of the Mountaineers certainly helped the Sooners out of a potential Thursday afternoon game and into a late Thursday game, and along with a potential semifinal matchup with Baylor, and not Kansas.

West Virginia: Which Mountaineer team will show up? The one that started the season 12-1 and beat Ohio State in a neutral site game? The one that fumbled its way through February and couldn’t win a road game? Or the one that won its final two games in March, defeating Iowa State on the road and upsetting Baylor at home? The Mountaineers are built around defense and their interior game, and that works as long as they’re getting some level of outside shooting, which doesn’t always happen. Watch the contributions of guards Miles McBride and Taz Sherman, who have delivered great games off the bench in the past week. That could have a big influence on which Mountaineers team we see.

West Virginia: Four. That’s how many Big 12 semifinals games the Mountaineers have reached in the past four seasons (in other words, in a row).

Who wins?: Oklahoma may be an NCAA bubble team in the eyes of some, but they’ve consistently been a 10-seed for most of this season, so I’m not sure a loss hurts them that much on Thursday night. But the Sooners are thinking about winning the Big 12 Tournament, and they couldn’t have ended up with a better draw, as they’ve beaten the Mountaineers twice this year, and handily at that (both by double digits). So why do I think West Virginia is going to win this game? If the Mountaineers really are going to start their big lineup, that gives WVU a chance to control Doolittle. But WVU’s offense seems to have upticked the past two games. McBride and Sherman can give them a boost off the bench. But it’s really about whether either Tshiebwe or Culver, or both, and step up and have a huge game. When one of them does, the Mountaineers tend to win. I suspect that’s what we’ll see Thursday night, and why I think WVU will win.