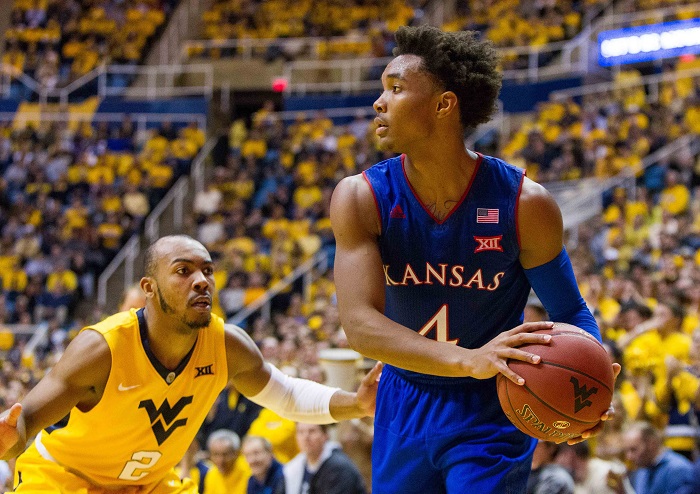 This March Madness Big 12 Rewind for 2017 takes you back to how the Big 12 Conference did in the 2017 NCAA Tournament.

Three new head coaches joined the Big 12 for the 2016-17 season. All, in their own way, had ties to either the Big 12, the Big 8 or the Southwest Conference.

Oklahoma State was done with Travis Ford after the 2016 NCAA Tournament. Ford had been good, but not great, as the successor to the Sutton family (first Eddie, and then Sean). Ford won 155 games in eight seasons and took the Cowboys to five NCAA Tournaments. But the Cowboys never advanced to the Sweet 16 and only finished in the top half of the conference twice. Remember — Eddie Sutton had taken OSU to Final Fours. Henry Iba had led the Cowboys to two national titles. That was the tradition in Stillwater, and the Cowboys were out to level up.

To do that, the Cowboys went after a Big 12 giant-killer from the NCAA Tournament. OSU hired Brad Underwood away from Stephen F. Austin, which had beaten West Virginia just a couple of weeks prior in the NCAA Tournament. Underwood built on the success created by his predecessor at SFA, Danny Kaspar, leading the Lumberjacks to 89 wins, three Southland Conference regular-season and tournament titles and three straight NCAA Tournament berths. The Lumberjacks reached the second round twice, with upsets of Virginia Commonwealth and the Mountaineers. Plus, Underwood had Big 8 roots. He played his final two seasons of college basketball at Kansas State. He also spent several years as an assistant coach at KSU.

TCU needed fresh blood after four seasons. While Ford had been solid at OSU, Trent Johnson was anything but for the Horned Frogs. He went 50-79 in four seasons, had one winning season and never made postseason play. The 2013-14 season saw the Horned Frogs go 0-18 in league play. TCU had to make a move, and to replace him the Horned Frogs went back to their roots and hired Jamie Dixon.

Dixon was a California native who, somehow, ended up at TCU as an undergrad. He played all four seasons for the Horned Frogs. He was an All-Southwest Conference selection in 1987 and helped the Horned Frogs to the NCAA Tournament. From there Dixon embarked on a short pro career and a long road as an assistant coach before taking over at Pitt in 2003 in the wake of Ben Howland’s departure to UCLA. Dixon spent 13 years at Pitt, won 328 games, won two Big East regular season titles and one Big East Tournament title before the school moved to the ACC. His Panthers went to the NCAA Tournament 11 times, reaching the second weekend of play three times, the height being an Elite Eight trip in 2009.

The Horned Frogs lured him home. Texas Tech did something similar with its head-coaching job.

After three seasons in Lubbock Tubby Smith took the job at Memphis. Tech had had four coaches in the past six years and they were seeking some stability, the stability it thought Smith would provide. So the Red Raiders reached deep into the recent past and sought an assistant coach who had West Texas roots and Red Raider ties. They just had to get him away from his new job.

Chris Beard may have been born in Georgia, but he got to Texas as fast as he could. He spent 10 years on an itinerant coaching path that led him to Texas, Incarnate Word, Abilene Christian, North Texas, Fort Scott junior college (as head coach) and Seminole State junior college (as head coach) before he landed on Bobby Knight’s bench at Texas Tech. For the next 10 years he worked with the Knights, and he learned a lot. From that point forward Beard was a head coach — with the South Carolina Warriors, McMurry, Angelo State and then Little Rock. That one season in Little Rock was eventful. The Trojans won 30 games, claimed the Sun Belt regular-season and tournament titles and upset Purdue in the first round of the NCAA Tournament. The Trojans fell in the second round to Iowa State.

Beard parlayed that into the head-coaching job at UNLV. That didn’t last long. When the Tech job opened up and athletic director Kirby Hocutt came calling, the job was too good to ignore. His ties to Lubbock were of utmost importance. Beard’s daughters also lived nearby. Tech and UNLV worked it out, and by mid-April Beard was home.

The 2016-17 season was more Kansas dominance. The Jayhawks won at least 30 games for the second straight year, and dominated the Big 12 Conference with a 16-2 league record. Kansas found itself at No. 1 at one point during the season before finishing up the year at No. 3. Four future NBA prospects led the way — Frank Mason (20.9 ppg), Josh Jackson (16.3 ppg, 7.4 rpg), Devonte Graham (13.4 ppg) and Sviatoslav Myhailiuk (9.8 ppg). Forward Landen Lucas averaged eight points and eight rebounds per game. KU was a national title contender once again.

West Virginia was second in the Big 12 for the second straight year, but this time the Mountaineers finished four games back of the Jayhawks and had to share second place with Baylor and Iowa State, as all finished 12-6 in league action.

The Mountaineers won 28 games, started the season at No. 20 and rose to as high as No. 7 before finishing the season at No. 13. Jevon Carter was now the team’s undisputed leader (13.5 ppg, 5.0 rpg, 3.7 apg) and the conference’s top perimeter defender. Esa Ahmad (11.3 ppg, 4.7 rpg) was the only other Mountaineer in double figures. But Nathan Adrian, Tarik Phillip and Daxter Miles helped comprise a formidable core.

Baylor won 27 games and experienced a meteoric rise. The Bears started the season outside the AP Top 25, rose to as high as No. 1 in the nation and ended the season at No. 12. Taurean Prince and Rico Gathers had left town. But, Johnathan Motley (17.3 ppg, 9.9 rpg) led the way for the Bears, along with newcomer Manu Lecompte (12.2 ppg). The rise of Jo-Lual Acuil (8.1 ppg, 6.7 rpg) helped, too.

At the Sprint Center in Kansas City, the Big 12 Tournament saw a huge upset in the quarterfinals, as No. 8 TCU upended No. 1 Kansas, 85-82. That opened the door for someone else to win the Big 12 Tournament. Iowa State and West Virginia advanced to the championship game, and the Cyclones won the whole thing, 80-74. For ISU, it was their third Big 12 Tournament title in four years. Morris was the tournament’s most outstanding player, while Burton, Thomas, Carter and Phillip were on the all-tournament team.

The first two days of the NCAA Tournament went well for the Big 12, as five of its six teams won games. Kansas cruised to a 100-62 win over UC Davis. Baylor had little trouble with New Mexico State, winning 91-73. West Virginia erased the previous tournament’s first-round upset by defeating Bucknell, 86-80. Iowa State handled Nevada, 84-73. And Kansas State rolled to a 95-88 win over Wake Forest.

The only Big 12 team to lose in the first round was Oklahoma State, as the Cowboys played a high-scoring classic with Michigan before losing, 92-91. The Cowboys shot 54.7 percent from the field, with Jawun Evans leading the way with 23 points and 12 rebounds. Jeffrey Carroll had 19 points, Phil Forte and Davon Dillard had 12 points each and Leyton Hammonds added 10 points. Michigan’s Derrick Walton led the Wolverines with 26 points and 11 rebounds, while D.J. Wilson had 19 points. Zak Irvin and Muhammad-Ali Abdur-Rahkman added 16 points each.

Michigan built up a lead late in the game and hung on for the victory.

For the second straight year three Big 12 teams would reach the Sweet 16. But which three?

Let’s start with Kansas, which drew Michigan State in the second round. Now, the Jayhawks had their issues with MSU in the past. But, this time Kansas was straight up dominant, defeating the Spartans, 90-70. KU was up 40-35 at the break and ran to a 50-35 edge in the second half. Kansas shot 53.1 percent from the floor and Josh Jackson led the way with 23 points. Frank Mason had 20 points, Devonte Graham had 18 points and Landen Lucas had 10 points and 11 rebounds. Miles Bridges led the Spartans with 22 points and 8 rebounds.

Baylor had a date with USC, and the Bears had to hang on to win, 82-78. Johnathan Motley led the Bears with 19 points and 10 rebounds, while King McClure had 17 points and Manu Lecompte added 12 points and 5 assists. T.J. Matson had 19 points off the bench. USC’s Chimezie Metu led the Trojans with 28 points.

West Virginia would make it three. The Mountaineers drew Notre Dame and ended up beating the Irish, 83-71. In a twist, the Irish were the team the Mountaineers would have faced had they advanced from the first round the previous tournament. West Virginia shot 50 percent from the floor while Jevon Carter led the way with 24 points. Daxter Miles had 18 points, Tarik Phillip had 12 points while Esa Ahmad and Elijah Macon had 11 points each. Bonzie Colson led the Irish with 27 points.

Kansas State ended its NCAA Tournament run with a 75-61 win over Cincinnati. The Bearcats had an 11-point lead at the break and they never let up. Troy Caupain led Cincinnati with 23 points. Wesley Iwindu had a 19-point game for the Wildcats, and he was the only KSU player in double figures.

Three Big 12 teams, three different regions. Could they all meet at the Final Four? Well, Kansas got things off to a good start.

The Jayhawks tangled with Purdue, which had just beaten Iowa State, in the Sweet 16 and won, 98-66. It wasn’t much of a contest and the win sent KU along to the Elite Eight for the second straight year.

Kansas had the lead at halftime, 47-40, and ran away with the game by outscoring Purdue, 51-26, in the second half. Devonte Graham and Frank Mason led the Jayhawks with 26 points each, while Josh Jackson scored 15 points and pulled 12 rebounds, Lagerald Vick scored 12 points and Sviatoslav Mykhailiuk added 10 points.

Baylor and West Virginia wouldn’t be as lucky. The Bears fell to South Carolina, 70-50, as Scott Drew and the Bears found themselves facing an old Big 12 rival in South Carolina coach Frank Martin. The Gamecocks had a 15-point lead at halftime and never looked back as Sindarius Thronwell led the Gamecocks with 24 points. Johnathan Motley led the Bears with 18 points and 9 rebounds.

West Virginia had its own troubles, too. The Mountaineers faced No. 1 seed Gonzaga and couldn’t get past the Zags, losing 61-58. Jevon Carter was the only Mountaineer in double figures with 21 points. Daxter Miles had 7 points and 10 rebounds. A trio of Gonzaga players scored 13 points — Przemek Karnowski, Johnathan Williams and Jordan Mathews.

Those last moments were heartbreaking for West Virginia. Three tries to tie the game and none of them fell.

And, yet, Oregon ended up turning over the Jayhawks, 74-60. In fact, Oregon was up 11 points at halftime and Kansas couldn’t find a way back into the game. Tyler Dorsey led the Ducks with 27 points as they headed to the Final Four.

It wasn’t the end the Jayhawks were hoping for. For the second straight year the Jayhawks’ NCAA run would end in the Elite Eight.