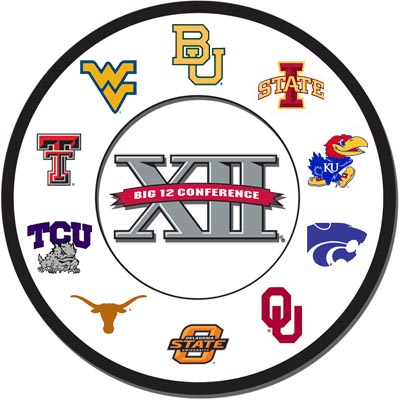 At this point we are all just hoping college football will return in its regular capacity come August or September. So since we’re all looking for content to get us through these tough times, we decided to get with our crack staff at Heartland College Sports and put together our “12-Team Dream Conference”. So without further ado, let’s get to it.

Derek Duke: Even though we can create this our own personal conference any way we want to, I kept things rather simple although I’m a complicated man. You know how much I love this conference (Although I don’t always like the leadership) and how much I enjoy covering it. Maybe it’s the bourbon talking but I truly mean it. If I had to create my own Big 12 conference with two divisions, it would look something like this.

I know it is basically today’s Big 12 with two added teams but there’s a reason. I like the current Big 12 teams and it has worked out well in my opinion, so I didn’t want to mess with the current format. But if I had to pick two teams, I went with Nebraska and Missouri. Even though Nebraska fans wouldn’t admit it, they would love to come back to the Big 12 and they fit right in since they were in once before. While Missouri enjoys the SEC money, they too just simply fit in better with the Big 12. Both schools were once in the conference and I would personally welcome both schools back with open arms. I’m sure some are asking why did I leave out Texas A&M and Colorado but the truth is, as much as I would like to go to Boulder to cover a game, the athletic program of Nebraska and Missouri are in much better shape. As for A&M, good riddance. They can keep their male cheerleaders in SEC country.

Oh, and in this conference, we play nine conference games unlike the SEC. There will be no cupcake games being played in November before rivalry weekend. And as for the location of the title game, just keep it in Jerry World.

Pete Mundo: Let’s start with the fact that I only watch Big 12 football. I don’t watch the SEC, ACC, Pac-12 (does anyone?) or Big Ten. All I care about is the Big 12. The other thing I love is when fans have the flexibility to drive to road games. So I am going to mix and match around the Big 12 Conference as it presently stands, because I love the conference.

OK, so you can beat me up for kicking out West Virginia, Baylor and TCU. I love those three teams in the Big 12, but the reality is the private schools don’t drive ratings, simply due to size, as much as the state schools. And WVU is outstanding, I love Morgantown, but as I mentioned I like it when fans can (somewhat) easily drive to games.

Adding Iowa to the Big 12 would be so much fun with Nebraska back in the mix as well. Iowa/Iowa State every year as a conference game?! Get Nebraska back in the conference where it belongs. Texas/Texas A&M comes back and Arkansas adds an old SWC foe to the mix as well in nice driving distance with some old rivals in the mix. Missouri is so out of place in the SEC. They need to come back for their old rivals and the Big 12 Tournament in Kansas City misses Mizzou. It’s a tough call, but that is the direction I would go.

Matthew Postins: I miss the Southwest Conference. I grew up on it. I loved it. So, I would welcome this realignment that was proposed on Twitter back with open arms.

From year to year the South Division could be one of the most competitive in the college game. The return of Texas A&M and the poaching of LSU (so their PRECIOUS rivalry can be preserved) bolsters a division that would already feature Texas and Baylor. Houston’s recruiting profile increases with the move, and the Cougars had some great years in the SWC. And Rice? Hey, I was there the last time the Owls beat the Longhorns (1994). Anything can happen, right?As for the North, bringing back Arkansas restores the new SWC to its original luster. Oklahoma is likely still the dominant team. But Oklahoma State and TCU can challenge the Sooners. Texas Tech and OU have cultivated a nice rivalry. And SMU? Well, they’ll need to expand that stadium, but bringing the Mustangs back makes the SWC circle complete. Let’s do this thing. It’ll be fun, and that’s what college sports is supposed to be about, right?

Cameron Brock: As many of you know, I’m by far, the wild card of this staff. Staying true to that moniker, I do not disappoint. Before I delve into my “dream conference”, I want to remind you that I am actually for disbanding all conferences in favor of Promotion & Relegation. Since this roundtable is a 12-team conference, I went ahead to talk bring up a conference of notable programs who are either defunct or dropped down.

1. Chicago Maroons (Currently in Division 3. Produced the first ever Heisman Trophy winner in Jay Berwanger. Also have two claimed National Championships from 1905 and 1913.)
2. Idaho Vandals (Moved down to the FCS after the 2017 season. Had moved up to the FBS alongside Boise State in the 1996 season. The two programs went into completely different trajectories. It would be fun to see them become a success story.)
3. Pacific Tigers (Dropped football in 1995 due to a $400,000 debt. Amos Alonzo Stagg coached at Pacific and Pete Carroll played free safety for the Tigers.)
4. Cal State Fullerton Titans (Dropped football in 1992 due to the California budget crisis, which ultimately killed the Big West Conference’s sponsorship of football.)
5. Long Beach State 49ers (Dropped football in 1991 due to the California budget crisis. Super Bowl XXXII MVP Terrell Davis played here under George Allen. Despite being in Long Beach, the 49er’s played five seasons in Anaheim Stadium between 1977-1982.)
6. Wichita State Shockers (Dropped football in 1986 due to financial strains. The Shockers have a long history including hiring the first African-American football coach at the FBS level and playing the first night game west of the Mississippi River. They also had over 30 members of the team killed in a 1970 plane crash on the way to play Utah State.)
7 UT Arlington Mavericks (UT Arlington dropped football in 1985 due to major budget concerns and low attendance. The school has been trying to re-introduce football for a while and recently opened a state-of-the-art facility which is the home of a WNBA team and has hosted ESPN’s Friday Night Fights. The budget is definitely in better shape.)
8 Xavier Musketeers (Cincinnati needs its cross-town rival to bolster its football program. Also, it would be a step closer to the return of football in the Big East Conference. This program was discontinued after the 1973 season.)
9.St. John’s Red Storm (A school which sponsored football for over 100 years finally dropped the program in 2002. Deceased New York Yankees PA Announcer Bob Sheppard played for St. John’s. Like Xavier, a return to football here would be another step towards the return of Big East football.)
10. St. Mary’s (CA) Gaels (Like all of the other California schools who have disbanded football, this one succumbed to the budget in 2002. St. Mary’s has plenty of history, including a 1938 Cotton Bowl victory over Texas Tech and a 1945 Sugar Bowl appearance against Oklahoma State.
11. Coast Guard Bears (Wouldn’t it be wonderful to see all of the U.S. Academies play each other? The Coast Guard plays in Division III.)
12. Merchant Marine Mariners (If the Coast Guard and the Merchant Marine Academy moved up to Division 1, all of the U.S. Academies would be in the top level of competition. The Merchant Marine Academy is in the same Division III conference as the Coast Guard Academy.)

Which one do you like the best? Let us know in our Big 12 forums as well!