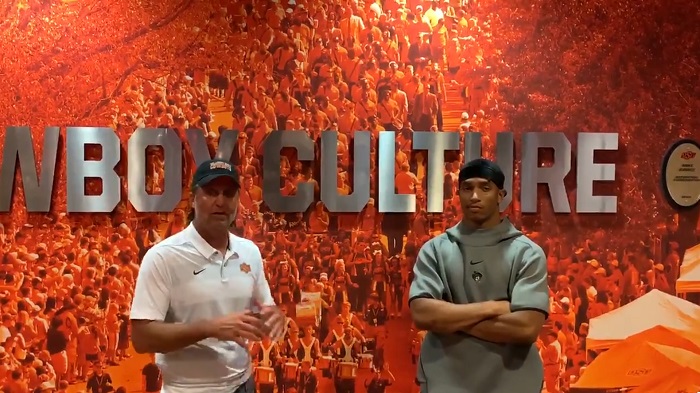 What a day it has been in Stillwater, Oklahoma.

It all started when a picture of Oklahoma State head coach Mike Gundy surfaced on social media of him going fishing over the weekend in a OAN, One America News, t-shirt.

That lead to Chuba Hubbard, the team’s star running back and Heisman contender, to send out a tweet that went viral, appearing to clearly criticize his head coach.

That lead to the Cowboys athletic department going into crisis mode, including statements from President Burns Hargis and athletics director Mike Holder.

But as the day came to a close, it looks like Gundy and Hubbard had a chance to visit and actually appear to have come together on some issues.

Gundy said in a video, “I met with some players and realized it’s a very sensitive issue with what’s going on in today’s society. We had a great meeting. I’ve been made aware of some things that players feel like could make our organization and culture even better than it is here at Oklahoma State. I’m looking forward to making some changes and it starts at the top with me.”

Hubbard apologized for “going about it the wrong way” by tweeting. Adding he’s all about action, and said he’s going to focus on bringing change.

The video ends with the two men high-fiving and hugging it out. As Dave Beall wrote today on Heartland College Sports, this is a moment where we should be rooting for Mike Gundy and Chuba Hubbard.

Why Mike Gundy and Chuba Hubbard Need Each Other Now, and We Should Root For It
Bob Stoops Nominated to College Football Hall of Fame
To Top