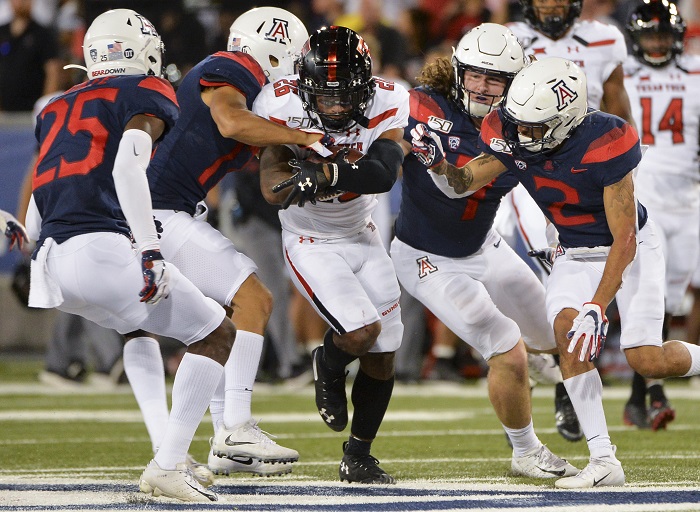 Over the coming days, we will have some fun ranking the top 10 non-conference games in the 2020 Big 12 football season. Of course, we have no clue what the 2020 college football season is going to look like and how the schedule is going to play out, but as we approach the dog days of summer, let’s long for some cooler weather, cold beer and pigskin and look forward to these 10 non-conference games as we count them down from No. 10 to No. 1!

Previously ranked:
No. 10: Oklahoma at Army
No. 9: Kansas vs. Boston College

The Texas Tech Red Raiders host the Arizona Wildcats once season after going to Tuscon and losing 28-14, which also happened to be the last game that quarterback Alan Bowman played in for the Red Raiders last year.

Arizona got off to a 4-1 start last season before finishing 4-8 on the season. The Wildcats go from Khalil Tate at QB and officially usher in the Grant Gunnell era. On the other side, Kevin Sumlin has hired former Iowa State head coach Paul Rhoads to take over the defense and try and turn around a unit that finished 11th in the Pac-12 against the rush and pass, and dead-last in scoring defense.

So for the Red Raiders, this means getting a look at Alan Bowman’s offense (or could it be Maverick McIvor’s) against its first Power 5 competition that struggled mightily last season. Also, we’ll get to see how Tech’s defense has improved against Kevin Sumlin’s offense, which despite some turnover, returns a lot of talent, especially at the wide receiver position.

This will be a telling game for Matt Wells to try and determine where this program is in Year 2. The game is at home and it’s the kind of match up against an average Power 5 opponent that if Tech is serious about winning some of those close games they missed out on last season, and taking a step forward, while reaching a bowl game, it’s just about as big of a “must-win” as a program can have in the non-conference.