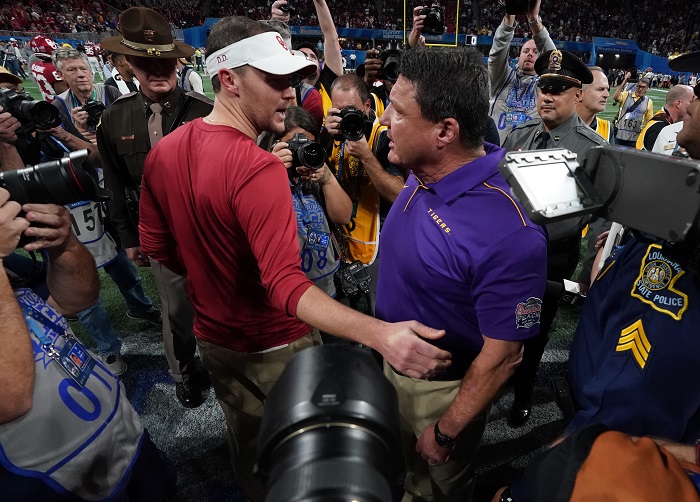 With the news drop of the Pac-12 cancelling their non-conference football games following in the Big Ten’s footsteps, it feels like the 2020 football season is on life support. Of course, there is plenty of speculation that the ACC will be next in line to become the third power five conference to cancel their non-conference slate.

That would leave the Big 12 and the SEC as the only two power five conferences left that still plan on playing a full schedule. However, if the Big Ten, Pac-12 and ACC all back out, that would force the Big 12 and SEC’s hand for them. And what better way to make this season complete than a Big12/SEC showdown? We already get to see it on the hardwood each year so why not move it to the gridiron?

So, with nothing else going on I thought I would have a little fun with this. Of course, the football version of this showdown is going to look a little different than the basketball side, but these would be my dream matchups.

I tried to keep it as fair as possible and of course since the SEC has four more teams, only ten of their fourteen schools would get to participate in this scenario. Also, since it would be a ten-game slate, I would let each conference have five games at home and five on the road.

Best on best is what I would call this game. Alabama is the cream of the crop in the SEC (most of the time) and Oklahoma has won five straight Big 12 titles. Let us see how the best team in each conference matchup as both recruit at high levels. Nick Saban and his defense going up against a high-powered Lincoln Riley coached offense. Count me in.

Come on. This was obvious right? It has been way too long since these teams met, and someone needs to make this game happen and put all the pettiness aside.

I could have gone Auburn here, but could you imagine Mike Gundy’s mullet in the swamp in all that humidity? All jokes aside, I think this year’s Oklahoma State team would hold their own against a good Florida team.

Can I call this the Gene Chizik Bowl? The trophy would be a picture of him in Iowa State gear on one side and one of him in Auburn gear on the other. Auburn always seems to have good talent on the defensive side of the ball and with Brock Purdy leading the way for the Cyclones, I think Iowa State could win this game.

Much like the next matchup on this list, this is a battle between two great defensive minds in Gary Patterson and Kirby Smart. Both programs have talent on the defensive side of the ball and if TCU quarterback Max Duggan takes the next step as a passer, TCU would make this game interesting between the hedges in Athens.

If Alan Bowman is healthy, he could get some revenge from that 2018 matchup in Houston when he made his debut for the Red Raiders. Imagine Alan Bowman slinging the football around and going up against a Lane Kiffin coached offense. This would be a fun offensive game.

How about a pound the rock and play defense kind of game? This would look more like an SEC game than a Big 12 one between Chris Klieman and Will Muschamp going head to head. There is no doubt that this one would be a hard-hitting matchup.

Maybe an odd matchup for some but it was hard for me to find the Mountaineers a proper SEC opponent. I feel like Mississippi State always has some solid talent, but West Virginia would make it interesting up in Morgantown. Hey, the SEC is not the only conference with great home venues even though the stands may be empty.

Bring back the border war baby! These two programs have not played football since 2011 and quite honestly, it is a shame. Back in the late 2000’s this was one of the better rivalries in the old Big 12 and I would love nothing more to bring this game back every year.

Will the Big 12 be able to Pull Off a Non-Conference Schedule?
College Football America’s 2020 All-Big 12 Team Released
To Top