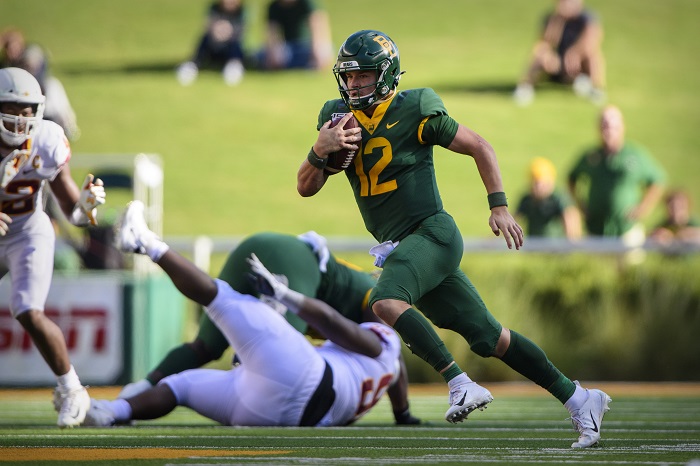 The 2020 college football season is slowly inching closer and it’s time for fans to start dreaming about the crisp, fall air and watching their favorite teams on the gridiron in the Big 12 Conference. Teams have turned over and have plenty of fresh faces. For some programs that’s a good thing, for others, not so much. But that’s part of the beauty of college football.

Of course, COVID-19 is playing a role and will be a big factor. As of now we know the non-conference slate is unlikely, so let’s just analyze the schedules from a conference perspective and go team by team in the Big 12.

Well, for new head coach Dave Aranda it doesn’t get much better than starting your head coaching career at Baylor with the Kansas Jayhawks who have been the doormat in the Big 12 for going on a decade. Baylor is replacing a ton of key pieces, especially on defense, so getting adjusted to a new coaching staff and new faces, there is no better team in the conference to get started against than the Jayhawks. Aranda owes a beer to whoever helped create the schedule last year, even though it was done long before he was even a name being discussed in Waco, Texas.

This was an all-time game last season when Baylor jumped out to the four-touchdown lead only to blow it in the second half when Jalen Hurts helped the Sooners come storming back. For those Baylor players still in Waco, there’s no doubt that game stings, along with the Big 12 Championship Game where they took OU to overtime with a back up quarterback and nearly found themselves in the College Football Playoff. Alas, now this game heads to Norman and Baylor will find itself as a substantial underdog.

Thursday night games in the Big 12 are always screwy. Just ask the Bears about last year’s game at West Virginia on Halloween night when they almost lost (won 17-14) against a struggling Mountaineers program. Matt Wells will have his team looking for a big jump in Year 2 and Baylor may be prime for the picking depending on if its new players can get up to snuff in time for this one in Lubbock.

This is Game 2 of an interesting stretch of games where the Bears will play the three fellow Texas schools in the Big 12 in a row with Texas Tech, TCU and Texas back-to-back-to-back. This is also the only home game of the bunch. It will be a three-game stretch that will define what Baylor is going to be in the final month of the season. Battling for a bowl game? Spoiler in the conference race? Or a second-straight year of being the conference’s surprise team?

This is the third of the three games in a row against the in-state Texas schools in the Big 12 and it’s the one with the most anticipation behind it. Last year Baylor dominated this game on the way to a 24-10 victory over the Longhorns to make it a clean 3-0 sweep over the Texas schools last year. If they are able to pull that off again then this season will have a much different look than many expect.

The Cowboys will come into this game playing their third road game in four weeks, which could mean the Bears get a tired group of Pokes. But regardless, Dave Aranda scheming against what could be the most explosive office in the Big 12 with Spencer Sanders, Tylan Wallace and Chuba Hubbard has all the making of one of the most underrated storylines in the Big 12 to watch this season.

Speaking of underrated match ups, this game last year really defined the season for both teams. Baylor won close games (23-21), while Iowa State lost its close games. It’s more like than not that at this point in the season Iowa State will be in contention, while I don’t know what this will look like for the Bears. But going to Ames in mid-November can be hairy for any opponent and if the Cyclones are also looking for revenge, this one could be the defensive slugfest we are all waiting for in the Big 12.

This was another one of those close games that the Bears pulled off last season with a 17-14 victory. Going to Morgantown in late November is never easy and it’s actually a very difficult four-week stretch for Baylor with three road games in four weeks, the first two against Big 12 contenders (at Texas. vs OK State), followed by the road games in Ames and Morgantown. It’s brutal four-game run for Dave Aranda’s team as it heads down the home stretch.

The Bears wrap up the season against Kansas State and I would not be shocked if both teams find themselves jostling for a record to finish in top-half of the Big 12. Last year the Bears rolled the Wildcats 31-12, but both teams have a lot of new pieces this year and they are two of the teams in the conference who are hardest to predict going into this season.