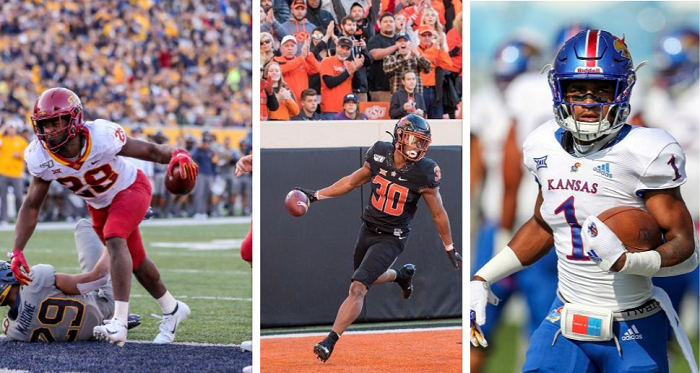 As we get closer to the Big 12 football season getting underway, it’s a chance to get a look at the top returning players, but also dive into who the new faces are going to be in the conference. At Heartland College Sports we don’t just want you to have all the information on who’s coming back, but also, who’s coming in? This way you are ahead of the curve compared to the rest of the college football world.

So, with that being said, we continue our position rankings, with the most undervalued position in the football world: The running backs.

For me, this one was a bit easy. The Cowboys have the best running back in the entire country with Chuba Hubbard, who of course leads our All-Big 12 preseason selections as well. He put up a 2,000 plus yard season in 2019 along with 21 rushing scores. At times, he was unstoppable and in the open field, nobody is catching him. While depth remains a bit of a concern, LD Brown and Deondrick Glass will back him up to give him a breather when needed. However, it still is the Chuba show in Stillwater.

There were several teams in consideration for this spot but when I look at the overall depth of this group, I really like it. Breece Hall was a true freshman stud last season rushing for nearly 900 yards and 9 scores. He came on strong a few games into the season but once he got going, he was a tough man to stop. Besides Breece are some other reliable options in Johnnie Lang and Jirehl Brock who was also a freshman last season. I also cannot forget about the speedy Kene Nwangwu who returns as well for his final year.

It is not often Kansas is this high on any list when it comes to football, but you can thank one man for that. That man is none other than Pooka Williams Jr. Pooka is a magician when he carries the football and on just about any play, he can make three or more defenders look silly. And while Khalil Herbert is gone, they do have Velton Gardner who comes back to be the next man up. Obviously, this pick was Pooka heavy, but you do not see a man like him in this conference often. Especially at a place like Kansas.

While I am not crazy about the top two returning running backs from 2019 for Texas, I am very intrigued by their brand new five star running back Bijan Robinson who looks ready to play right away. With Robinson, Roschon Johnson and Keaontay Ingram return as both players rusher for over 600 yards a season ago and combined for 14 rushing touchdowns. With Roschon and Keaontay coming back and with the addition of Robinson, I think Texas will have three solid backs for 2020.

Calm down Oklahoma fans. CALM DOWN! Look, if Trey Sermon and Kennedy Brooks were playing football for Oklahoma this season, they would jump into my top two but that is not the case here this season. Of course, it does not help that their lead returning back Rhamondre Stevenson will miss some games as well. Without Rhamondre, the Sooners will be looking ta playing TJ Pledger, Seth McGowan, and Marcus Major. While TJ Pledger has a little experience, it has not come all together for the talented back. Meanwhile, Seth McGowan is a true freshman and Marcus Major was redshirted last season.

Losing JaMycal Hasty will sting a little but Baylor has some nice depth overall at running back. John Lovett is a proven back who rushed for over 650 yards a year ago and Trestan Ebner also has stepped in when needed. Beyond these two, the Bears could see freshmen Qualan Jones and Craig Williams get their chance to shine this year as well. While nobody out of this group really pops in my eye, there are a few capable guys of getting the job done for Baylor.

Much like Kansas, except for of course the ranking, Tech has a one-man show in the backfield with SaRodorick Thompson. SaRodorick rushed for 787 yards as a redshirt freshman last season and to me, was their best back in 2019. Even though Tech loses Armand Shyne and Ta’Zhawn Henry, they did bring in Alabama grad transfer Chadarius Townsend to take some of the pressure of Thompson.

I will be honest with you; I would not be surprised one bit if this ends up being a top five group when the season ends. However, a lot of these guys do not have the experience for me to put them any higher. Maybe experience is overrated in certain cases but make no mistake, there is some talent here. While TCU loses Sewo and Darius Anderson, they bring back plenty of young talent with Daimarqua Foster and Darwin Barlow. Not to mention, they also brought in five-star running back Zach Evans who was the number one rated running back for the class of 2020. Eamari Demercado is another name to watch but I honestly believe some of these youngsters will pass him up on the depth chart.

Losing James Gilbert and Jordon Brown is tough, but the good news is that the Wildcats have some options to try and fill in some missing pieces. Harry Trotter appears to lead the charge for K-State and Jacardia Wright and Joe Ervin will help as well. All three have gotten some praise from fall camp but there is a name to watch out for. True freshman Deuce Vaughn appears to be turning some heads and it is possible he could get some meaningful snaps this season.

I felt bad for West Virginia running backs last season. They had to deal with some atrocious offensive line play and were amongst the worst teams when it came to running the football in 2019. Maybe that will change this season, but the question is how much will it change? Leddie Brown will be the main back for the Mountaineers as he rushed for just 413 yards and one touchdown last season. Joining him will be Alec Sinkfield and Tony Mathis alongside freshman A’Varius Sparrow. Maybe this group can jump up a spot in these rankings but as of now, I think they belong at the bottom.

No Fans for Kansas Jayhawks Football Opener
Are the Oklahoma Sooners on the Verge of Being the 2015 Clemson Tigers?
To Top