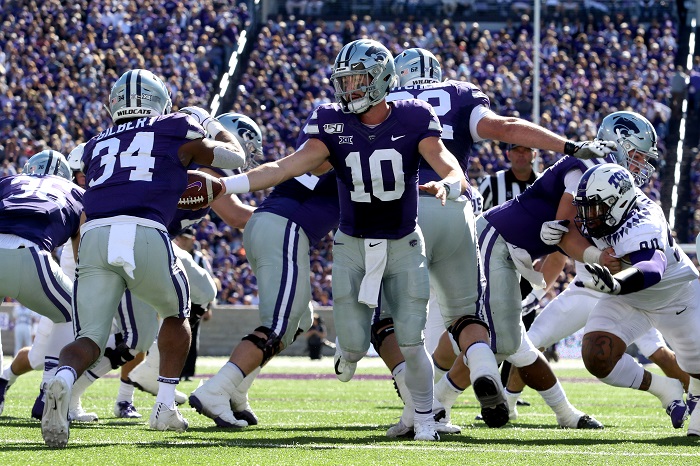 Here is everything you need to know about the upcoming Big 12 game in our Kansas State vs. Arkansas State preview and prediction.

Fun fact: A win would make QB Skylar Thompson the first K-State quarterback since at least the 1930s to win three-straight starts in season openers.

Sure, you can make a case for Thompson every week, but it’s the first game, after a short offseason with no spring practice, with a brand new offensive line for the Wildcats. So it’s up to Thompson and his leadership abilities to get his guys in a position to work through some of the kinks that come with five new starters up front. Yes, his ability throwing and running will be important, but how he helps his new-look line navigate should not be overlooked.

Hughes is back for the 2020 season after earning a medical hardship following injuries in the offseason that derailed his 2019 campaign. But back in 2018, he finished third on the team with 56 tackles to go along with 7.0 tackles for loss, two forced fumbles and a fumble recovery. If Hughes can come back with that type of tenacity and create a great 1-2 punch with Elijah Sullivan, it will be one of the more underrated linebacker duos in the entire nation.

Green lit it up against Memphis in the season opener with five catches for 99 yards for 19.8 yards per reception. This is more receiving yards than he has had in any season thus far. Is it a mirage or is the senior having a break out moment that will carry forward throughout 2020? Jonathan Adams is the No. 1 target for A-State, but Green might be the one that teams overlook and ultimately burns opponents. At 6’5’’, 200 lbs, he’s a match up nightmare and was listed as a Preseason Thrid-Team All-Sun Belt selection by Phil Steele.

Reimonenq finished last season 10th on the team with 39 tackles, plus two tackles for loss and an interception. Last week against Memphis he piled up 11 tackles and matched last season’s total with two tackles for loss. He’s only a sophomore but one who clearly will be heard from in the Sun Belt this fall. Whether he’s lined up against Malik Knowles or Wykeen Gill remains to be seen, but it will be a match up to watch this weekend.

Run, run, run. Kansas State needs to build confidence in its running game which will also help its new faces up front. In last week’s loss to Memphis, the Tigers ran all over Arkansas state for 227 yards on 48 carries. Last season, K-State ranked fourth in the Big 12 with 178 rushing yards per game. Chris Klieman definitely wants to keep that going heading into this season and will want to get off to an encouraging start this fall. Look for the Wildcats to pound the rock and make the Red Wolves stop them on the ground before switching things up.

The Red Wolves should try and take advantage of K-State’s secondary. A-State wants to get the ball downfield anyway, and the Wildcats certainly return some quality players, but there are unknowns as well. A.J. Parker is back at cornerback after his season was cut short with injuries in 2019, but he still earned Honorable Mention All-Big 12. Wayne Jones slots in at strong safety, where he started 13 games, Jahron McPherson moves from nickel to free safety after 12 starts last season. But the nickelback spot is a work in progress (Will Jones) and the other cornerback will be either Minnesota transfer Kiondre Thomas or Lance Robinson. There may be some holes and rust that Arkansas State can exploit early on to try and pull off an upset.

This game will be closer than it would be under normal circumstances. Arkansas State already has a game under its belt, while returning 13 starters and eight All-Sun Belt selections from a year ago, while K-State is playing its first game action in a chaotic offseason that saw the O-line turn over with no spring camp and a fall camp that was stop-and-go due to positive COVID tests. But ultimately Kansas State’s talent will prevail to move Kansas State to 1-0 to start the season.