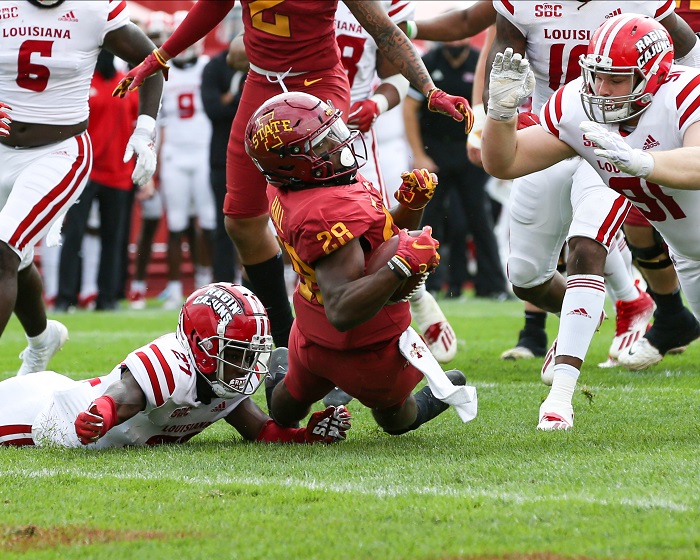 Today was supposed to be a great day for Iowa State football. Going into Saturday, expectations were sky high in Ames and for the first time in a long time: it was Big 12 title or bust.

With veteran quarterback Brock Purdy along with stars Breece Hall and Charlie Kolar coming back and not to mention a solid defense. There was a reason why people were high on the Cyclones this year. However, there is one thing to remember. When it comes to college football, it can be unpredictable and sometimes you must expect the unexpected. And that is exactly what happened in Ames, Iowa today. The unexpected happen.

The first quarter was a bit ugly on offense for both sides. Iowa State had several key drops in the passing game and their defense was looking a bit sloppy when it came to tackling. However, no points were scored as both Louisiana Lafayette and Iowa State went scoreless in the first quarter. But the Cyclones got the offense going in the second quarter as they fed running back Breece Hall on a key drive before Kene Nwangwu finished it off with a short touchdown run to put Iowa State up 7-0.

But that momentum did not last long because on the ensuing kickoff, Louisiana Lafayette’s Chris Smith took the kickoff back 95-yards back for a score to tie the game at 7.

Iowa State’s momentum would not be denied though because immediately after the kickoff return, Brock Purdy led a good drive that resulted in a Breece Hall 11-yard touchdown run to put Iowa State back on top 14-7. However, the Rajin’ Cajuns would not go away and add a field goal before the first half ended with Iowa State leading 14-10.

Just like the first quarter, the third quarter was just as bad for the Cyclones. Iowa State had three drives in the third quarter that resulted in a loss of downs, and interception and a three and out. And as the Cyclones struggled to get the offense moving, the Rajin’ Cajuns were able to hit big on a 78-yard touchdown pass from Levi Lewis to Peter LeBlanc to give his team their first lead of the game 17-14. But the big plays did not stop there as soon after Louisiana Lafayette’s Eric Garror took a punt back for a score for yet another special teams’ touchdown to extend the Rajin’ Cajun lead to 24-14 early in the fourth quarter.

No matter the circumstances, this Iowa State offense simply was stuck in the mud. They did not score in the fourth quarter as the went scoreless in the second half and before the game ended, Louisiana Lafayette added a very late score to rub some salt in the wound to pull of the 31-14 upset.

Without a doubt, this game was an offensive disaster and a special team’s disaster for the Cyclones as they gave up two scores on special teams. But beyond that, Brock Purdy looked rusty as he went just 16 for 35 and threw for 145 yards. Now, it was not all his fault as his receivers struggled to get separation and dropped their fair share of passes. Also, tight end Charlie Kolar was out but I am not sure if he would have won the game for them. Heck, even the offensive line looked a bit lackluster as well.

This was a huge bump in the road for Iowa State and even though it was ugly as all get out, there hopes of making it to a Big 12 title remain intact. That is of course if they can find a way to get this first game out of their system.