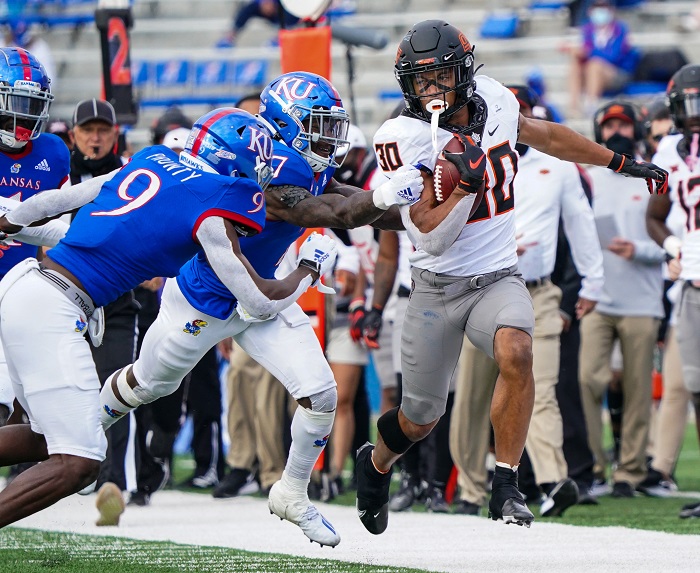 Through two games, Oklahoma State was led by its defense and running game. On Saturday in Lawrence, Mike Gundy got to see his passing game light things up as well as the Pokes rolled over the hapless Kansas Jayhawks 47-7.

True freshman QB Shane Illingworth got the start again in place of Spencer Sanders, who is nursing an ankle injury, and he threw for 265 yards and three touchdowns. Illingworth looked the most comfortable he has since entering the Tulsa game in relief during the season opener.

Both offenses were relatively stagnant early on with Oklahoma State leading 3-0 10 minutes into the game. Then with one minute left in the first quarter, Chuba Hubbard punched it in from one-yard out for a 10-0 Oklahoma State lead and the route was on. That was the first of three-straight OSU possessions that resulted in touchdowns. On the next drive, Illingworth found Braydon Johnson for a 66-yard score on the first play. And then it was a five-play, 85-yard drive where Illingworth found Tylan Wallce for a 55-yard touchdown.

Chuba Hubbard capped off the first half with a 12-yard touchdown run that wrapped up an 11-play, 88-yard drive. The Cowboys led 31-0 at halftime and played several of their back ups in the final 30 minutes.

The Cowboys scored on their first three drives of the second half, with a touchdown to Tylan Wallace, and then two field goals, as the lead ballooned to 44-0, before capping off the 47-7 win.

Chuba Hubbard ran for 145 yards and two more scores, while Tylan Wallace had nine catches for 148 yards and two touchdowns. Oklahoma State finished with 593 yards of offense, including 298 yards through the air and 295 on the ground.

The Pokes held KU’s quarterback duo of Jalon Daniels and Miles Kendrick to 14 of 24 for 92 yards and a pick, and held KU to 101 rushing yards. KU did not have a play go more than 10 yards until the fourth quarter.

Oklahoma State improved to 3-0 and is off next week before taking on Baylor on October 17th. The Jayhawks are also heading into a bye week before traveling to Morgantown to take on West Virginia in two weeks.