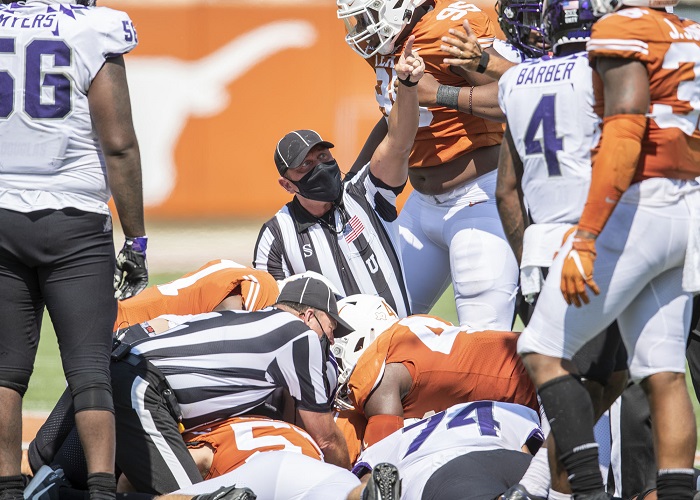 The Big 12 officiating, well it really sucks, for the lack of more appropriate word. The league has been poor in this regard for several years now, but this 2020 season, though young, has been eventful to say the very least.

The league may have lost Mike Defee and his guns to the NFL, but there are plenty of officials aspiring to be him, and are working out hard for those biceps.

Through the first couple of games, officials are throwing, on average, about 18 flags per Big 12 game, around 9 per team (talk about needing an ice bath). How is this happening? Are they just looking for their 15 minutes of fame on TV? Otherwise I have absolutely no idea how or why they throw so many flags in every single game.  My buddy who used to ref high school games would tell me, “well the idea in officiating is really to let kids play. You flag the felonies and mostly ignore the misdemeanors.”

But here’s the problem: The Big 12 does the opposite. Their officials flag the misdemeanors, and ignore felonies.

In Austin, the Texas and TCU contest had 60 yards in penalties before either team had 25 yards of offense. It was a joke. They tried the opening kick off 3 times, they called a bogus offensive pass interference against Texas, ejected Juwan Mitchell for a very questionable targeting penalty, missed several egregious holds committed by TCU, even picking one up after throwing it. The officials inserted themselves into this game far too frequently and nobody was happy about it. Even FOX Sports analyst Joel Klatt claimed it was probably the worst officiated game he had ever seen. If only the horrible officiating stopped there! But, it didn’t.

Baylor went to Morgantown and when the Bears score a touchdown, even the staunchest of Mountaineers would agree, not only do they get the call wrong on the field, but they review it and still get the call wrong. Instead of a touchdown, the Bears gave it back to WVU on a turnover on downs. This is a game that ended up with WVU winning in overtime. The Bears and Mountaineers combined for 24 penalties, and they called all sorts of tick-tack stuff that made absolutely no sense.

In Ames, Oklahoma took on Iowa State and both teams had 9 penalties. If the Sooners even looked at Charlie Kolar in a nasty way, they would get called for a hold or pass interference in the game. At one point during this game, Iowa State just threw it towards Kolar knowing they would get a flag and a first down. The officials even threw a flag for pass interference on Oklahoma’s Brenden Radley-Hiles on a ball that was tipped. In the second half, it only got more ridiculous, as Iowa State’s Gerry Vaughn was ejected for targeting. Sure, it was roughing the passer, but there was not even contact to the head or neck area, and no launch. The officials get two chances to get this right which makes it even worse. Then Iowa State had an 85-yard return late in the fourth quarter that should have been called back for several egregious holds, and the easiest defensive hold of the game was missed as OU WR Charleston Rambo was clung to for about 20 yards on Oklahoma’s final offensive play that resulted in ISU’s game-clinching interception.

The Big 12 is breaking in several new crews, but are still having the same problems. The officiating in this conference is a national laughingstock. They are not being invisible. The officials are ruining Saturdays around the league for the fans, players and coaches. These guys are professionals, and need to be held to a higher standard.

Each and every team that lost this weekend certainly had other plays they could have made to overcome poor calls, but that isn’t the point. You or I could not make this many widespread errors in employment and expect to be retained. This is also, unfortunately, just the short version of the events that took place over the course this young season. Do I really miss Mike Defee and Reggie Smith? It’s something I never thought I’d say, but yes, I do.

Once Again, the National Media Won’t Give the Big 12 Credit
Big 12 Continues to Build its Brand… on Defense
To Top