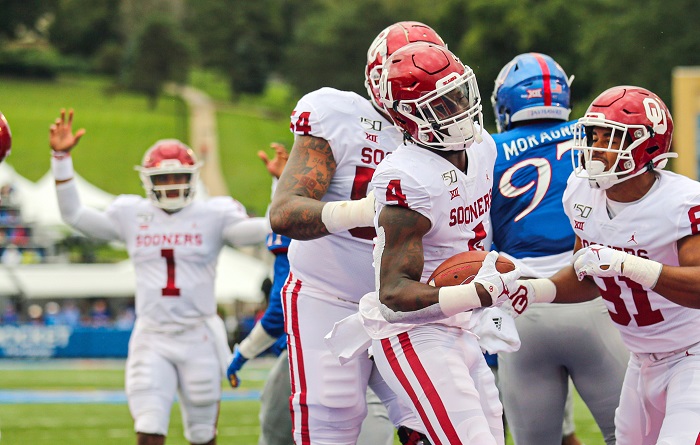 Here is everything you need to know as the Kansas Jayhawks take on the Oklahoma Sooners in Big 12 action.

If you’re going to commit to youth, then commit. And that appears to be what the Jayhawks have done with the true freshman, who JUST turned 18 last week. He’s already made four collegiate starts. He’s thrown for 546 yards in five games, and while he has yet to throw for a touchdown, he does have 83 yards rushing and three rushing touchdowns. It’s tough sledding. But Daniels is giving the Jayhawks some positives in this, to this point, winless season.

The redshirt freshman is starting to get some notice from Big 12 offensive coordinators. With 6.5 tackles for loss this season, Harris is tied for the Big 12 freshman lead with TCU’s Khari Coleman and is fourth nationally among freshmen. Now those six tackles for loss are concentrated in three games, but he’s now a full-time starter and he’s getting the reps that are going to make him better beyond this season.

A loooong time ago, the Jayhawks had a tremendous cornerback named Aqib Talib. Prunty’s name is going to start being whispered in the same breath if he keeps playing like this. The true freshman is tied for second in the Big 12 with six pass break-ups, which is also tied for the lead among all freshmen nationally. He’s playing his way onto freshman all-America teams everywhere.

The senior is coming off a week in which he rushed for three touchdowns against Texas Tech and was named Big 12 co-offensive player of the week. More importantly, his return to the lineup entering November gives the Sooners another piece to their running back puzzle, as Stevenson can now support T.J. Pledger and Seth McGowan, who have carried most of the load this season. Despite missing the first five games due to suspension, Stevenson is now the Sooners’ fourth-leading rusher this season and has as many touchdown runs as McGowan.

Like Stevenson, Perkins missed the season’s first five games after a pre-Peach Bowl suspension. In just one game Perkins had three tackles, two tackles for loss and a quarterback hurry. He’ll bring energy to the Sooners’ pass rush for the second half of the season, one that has generated 17 sacks in six games.

You know we’ve been on the Marvin Mims train this season. But Wease, a sophomore, deserves a shout-out. He has as many receptions (23) as Mims in six games, even though he doesn’t have a touchdown reception to show for it. Aside from the touchdowns, Wease’s numbers are quite comparable to Mims’ and he’s emerged as a nice counter-punch in the offense.

If you reviewed our players to watch, you’re seeing a trend — freshmen. The Jayhawks have A LOT of them. Kansas has 37 true freshmen on its roster, 22 of which have appeared in at least one game. Kansas has 67 underclassmen, which is 60 percent of its roster. Of those underclassmen, 42 have played, which is more than half the roster. Fifteen Jayhawks have made their first career start this season, and 33 players from head coach Les Miles’s first two recruiting classes have played at least one game. Finally, 18 true freshmen have played a game this year, and five have started at least one game. Kansas is betting the farm that it can recruit high school talent, keep them at Kansas and develop them into Big 12 players. The very early returns are promising, but it won’t help them much this season.

The Sooners are starting to figure it out, and wouldn’t you know it? It took that four-overtime win over Texas in the Red River Rivalry, and a bye week, to do it. But OU is looking more like itself. The offense has become more consistent, as has the play of quarterback Spencer Rattler. The return of Stevenson is only going to make the run game more explosive. The defensive adjustments have paid off, too. After giving up at least 30 points in each of their first three Big 12 games, the Sooners have held their last two Big 12 opponents — TCU and Texas Tech — to under 30, with an average of 21 points. The Tech game is big deceptive. The Sooners held the Red Raiders to 14 points in the first three quarters before Texas Tech scored 14 fourth-quarter points.

Kansas has lost the last 10 games. In fact, Kansas has scored fewer than 10 points in five of those games. OU has a 77-27-6 edge all time and a 40-13-3 edge in Norman. So let’s not sugar-coat this. The Sooners are going to get their back-ups plenty of playing time. The only way OU loses is if the Sooners give the Jayhawks A LOT of help.

Oklahoma Sooners Start Hitting Their Stride With 62-28 Win Over Texas Tech
Iowa State vs. Baylor: Preview and Prediction
To Top