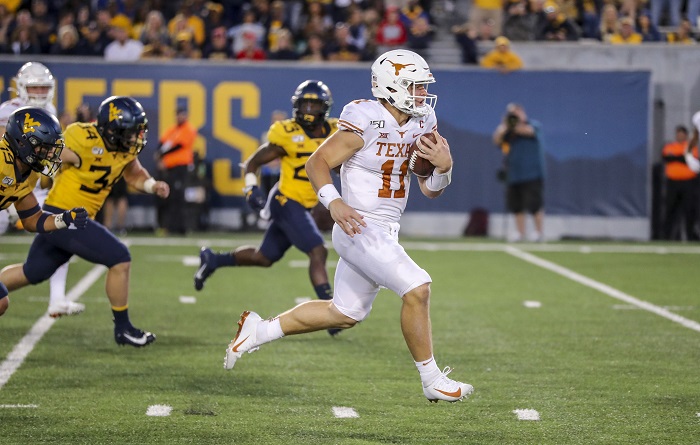 Here is everything you need to know about the upcoming Big 12 football match up in our Texas vs. West Virginia preview.

Fun Fact: The Longhorns are 4-5 against West Virginia all-time, and 1-4 when the teams face off at Darrell K Royal-Texas Memorial Stadium. West Virginia is the only current member of the Big 12 with an all-time winning record against Texas.

Doege had his best performance of the season in Saturday’s 37-10 win over Kansas State finishing 22/34 with 301 yards and two touchdowns, plus zero interceptions. His 84.4 quarterback rating was his best of the season. After throwing a combined three interceptions against Baylor and KU, Doege hasn’t thrown any the last two games. He needs to keep that streak going to win the game.

Stills is a key cog in this Top-5 defense in the nation and he’s done it with seven tackles for loss on the season, which is tied for fourth in the Big 12. But he’s also now getting to the quarterback, with one sack in each of the past two games for the Mountaineers. His brother, Darius, has a slightly better stat line this season (3.5 sacks, 6.5 TFL), but Dante has been coming on strong lately and can’t be overlooked by the Longhorns offensive line.

It’s predictable, but as Ehlinger goes, so go the Longhorns. There’s no way around that. Also, with RB Keontay Ingram out this weekend, and for the foreseeable future, the running game gets thinner. Ehlinger is first in the Big 12 in passing touchdowns, third in passing yards, third in the Big 12 in rushing touchdowns and 13th in rushing yards. He literally does it all for this team and that will be needed again on Saturday.

Ossai made the game-winning tackle in overtime last week against Oklahoma State. He had, by far, his best game of the season with a season-high 12 tackles, three sacks, one forced fumble and two fumble recoveries. Ossai is third in the Big 12 in total tackles, second in sacks and first in the league in tackles for loss. He’s quickly shooting up the list to be the Big 12 Defensive Player of the Year.

The Mountaineers need to build on their passing attack from last week against Kansas State when Jarret Doege had his best game of the season as was noted above. Texas comes into the game giving up the second most passing yards per game in the Big 12 Conference at 278 ypg. I expect Texas to try and shut down running back Leddie Brown, which means it’s going to be on Doege, plus his wide receivers, who performed better last week after several drops the week prior against Texas Tech, to step to the plate and put some points on the board in Austin.

Texas needs to do the little things better. We know UT has the talent and that hasn’t been the issue in a long time in Austin. Texas ranks last in the conference in penalty yards per game (87.5). That’s step one. Then it’ll require Sam Ehlinger to once again have to do it all for the Longhorns going up against the No. 1 rushing and passing defense in the conference. But if I’m Tom Herman I’m trying to establish the running game first on Saturday. Five-star freshman RB Bijan Robinson had his best game of the season on Saturday, leading the Longhorns with 59 rushing yards. If he can continue to carry the load, with Ehlinger’s running option a major role as well, that could open up the passing game for OC Mike Yurcich.

Yes, I’m calling for the upset here. WVU is second in the Big 12 with 20 sacks in six games, while Texas has given up 16 sacks, the second-most in the Big 12 other than Kansas. That is part of what this game will come down to on Saturday. The defense will travel and the offense will do just enough for Neal Brown. Tom Herman wins as an underdog (last week), but he disappoints as a favorite.