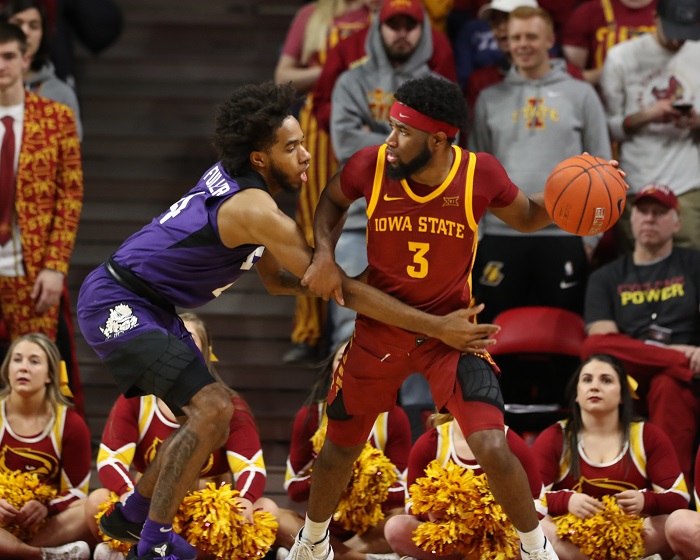 There are many great players in the Big 12 entering the 2020-21 season. Some of them were on rosters last year but didn’t get their chance to shine. Today we look at a player from each team that you may not know about that has a chance to become a big part of their team’s plans in 2020-21. The requirement is that the player has to have been a part of the team’s roster last season. We’re also looking for players that may not be obvious selections.

The one area where the Bears can use some help is inside, in the wake of the graduation of Freddie Gillespie. Tchamwa Tchatchoua sat out last year after transferring from UNLV, and during his one season with the Runnin’ Rebels he started 11 games and averaged 3.4 points, 3.5 rebounds and 0.7 blocks in 13.3 minutes per game. If we’re running his numbers by percentages, he led UNLV with 14.9 offensive rebound percentage and ranked second with 5.3 block percentage. Playing time will be hard to come by, but the Bears are hoping he can make an impact.

As a freshman Jackson got extended playing time once Tyrese Haliburton was out for the season. Jackson started the final 12 games of the season, and his season averages — 4.3 points, 1.7 rebounds and 1.3 assists while playing 21.6 minutes per contest — don’t show that he scored 10 points or more in four games and shot nearly 38 percent from the 3-point line once he cracked the starting lineup. He was also one of five Big 12 freshmen with at least 40 assists and 25 steals. The Cyclones have plenty of openings in their rotation, so there are opportunities for Jackson to carve out a bigger role.

Wilson came to Kansas as the No. 53 recruit in the nation, according to 247Sports.com. He played two games last season before a broken ankle led him to redshirt for the 2019-20 season. Wilson should compete for a role right away, and during his time at Guyer High School in Denton, Texas, he averaged 18.1 points, 7.5 rebounds and 3.0 assists his senior season. Had Wilson not been injured, he likely would have been a rotation player for the Jayhawks as a true freshman. He now gets the chance to push for a role as a redshirt freshman.

The Wildcats have an absolute need to get some offense out of the guard position, and among the Wildcats’ returning sophomores, Gordon is the best bet. Last year he was one of six players to play in every game, despite being a true freshman, and had averages of 6.4 points, 3.4 rebounds and 1.3 steals per game. He shot 44.3 percent from the floor, 32.9 percent from the 3-point line and 65.6 percent from the free throw line. He was in the Top 5 on the team in five different categories. If he improved as expected, he can go from contributor to leader this season.

It’s time for that solid 2019 OU recruiting class to start paying off, and Iwuakor has the tools to cash the check. A four-star recruit and a Top-90 national player, Iwuakor got some playing time last year for the Sooners. In 26 games, he averaged 2.6 points and 2.3 rebounds in 8.7 minutes.

Senior Brady Manek is going to start in front of him, but Iwuakor is poised to get a solid 12-15 minutes playing behind Manek, or more if he can play his way into the starting lineup. Remember — no Kristian Doolittle this year, so there’s frontcourt playing time to be had besides being Manek’s backup.

Harris came to OSU last fall as a Top 100 national recruit and, with a solid starting lineup already in place, playing time was difficult to come by. But he played in 22 games, averaged 3.4 points per game and scored a season-high 10 points again Georgetown in his first career start. With the departures of Lindy Waters III and Thomas Dziagwa, there are openings in the frontcourt. There is competition, but Harris has the chops to get into the mix as a starter or a backup that gets extended playing time.

The Top 100 recruit played 32 games as a freshman last year, as he averaged 5.7 points, 1.8 rebounds and 1.5 assists per game. He scored 10 or more points in six different games and proved to be one of the best free-throw shooters on the team (81.8 percent). With the graduation of Desmond Bane, there’s a gaping hole offensively. R.J. Nembhard will fill some of that. But Fuller has the tools and the opportunity to average 10 or more points per game this season.

There is currency in being a 7-footer, no matter the program. And the sophomore will have a harder time breaking into the rotation due to the high number of players returning for the Longhorns. But he provided a glimpse of his potential impact on Feb. 19 when he scored 20 points against TCU. He also had seven rebounds against Iowa State on Feb. 15. He won’t crack the starting lineup with Jericho Sims still in town, but with 12-15 minutes per game Baker can provide Sims a good spell and hold down the paint for the Longhorns.

Smith did not play last season due to a medical redshirt. But the Red Raiders lost some talent in the frontcourt, so there’s an opening for Smith to compete for that space. At Trinity Christian High School Smith averaged 17.9 points, 12.3 rebounds and 3.0 blocks his senior year. His length and athleticism is going to make him a good fit for Texas Tech’s overall offensive scheme. If he’s a willing defender, the kind that head coach Chris Beard likes, he’ll get some playing time and have the chance to make an impact.

The Mountaineers were talented enough last year to redshirt Bridges, who came to Morgantown as a Top 100 player. During his time at Fairmont High School in Fairmont, West Virginia, he averaged 21.6 points, 6.7 rebounds, 1.7 assists, 2.2 blocks and 1.9 steals per game as a senior. The Mountaineers do return a solid frontcourt, but Bridges’ talent will be hard to ignore and head coach Bob Huggins will find a way to work Bridges into the lineup.

Oklahoma State Should Watch These Games This Weekend to Keep CFB Playoff Hope Alive
Big 12 Football Week 9: The Good, the Bad and the Ugly
To Top