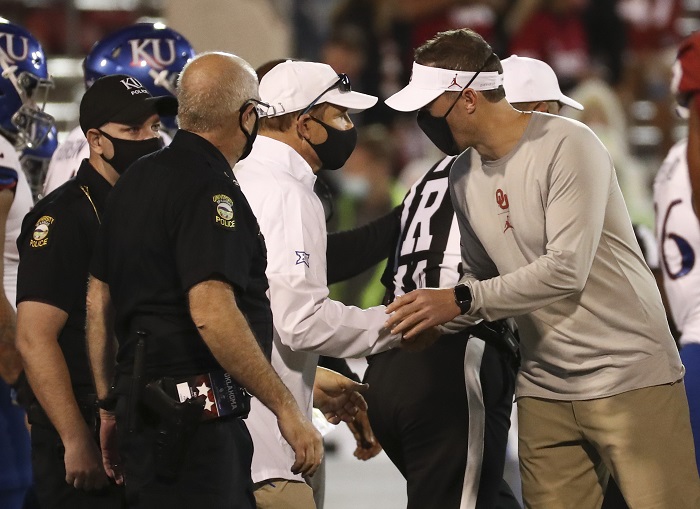 The Oklahoma Sooners absolutely hammered the Kansas Jayhawks on Saturday as they continue to get healthier and the young, super-talented players keep getting better. OU does have the best odds to make the CFB Playoff, and I understand why, but with two losses they’re still a long shot. The match up in two weeks against Oklahoma State will be a huge game for determining which teams will be playing for a Big 12 Title.

For a second-straight week, the Longhorns did what they had to do to get a win. It wasn’t always pretty, and WVU made some coaching mistakes, but credit to Tom Herman as he’s had his back against the wall the last two weeks and has picked up two-straight wins. Bijan Robinson is starting to impress at running back and the defense continues to make plays. I don’t see Texas reaching AT&T Stadium, but they’re in the mix which many of us did not think would be possible two weeks ago.

The Oklahoma State Cowboys move up a slot after sneaking out of Manhattan, KS with a 20-18 win over the Wildcats. Like Texas, the Pokes benefited from a couple of coaching mistakes by their opponent, but who cares? They should take it a run. The defense is outstanding. But it’s the offense that still has concerns as Spencer Sanders still doesn’t look comfortable and Chuba Hubbard is banged up. It’s not all roses in Stillwater, but they’re right in the thick of the race with a few games left.

The Iowa State Cyclones nearly saw their season go up in flames against Baylor on Saturday night. But 28-straight points later and the Cyclones are still in first place in the Big 12 Conference. Go figure? Still, this team has consistency issues and Brock Purdy does not look like a guy who is ready for the next level. For Iowa State’s sake, maybe that means he comes back in 2021, but for this year, he’s had some shaky moments that have cost this team when it matters most.

TCU’s game against Texas Tech was an ugly one, but for the Horned Frogs, they’re quietly starting to improve with two-straight wins over Baylor and Texas Tech. Granted, they’re not the cream of the crop in the conference, but the Horned Frogs had to get back on track to avoid disaster and they did just that these last two weeks.

The West Virginia Mountaineers suffered a tough loss to the Longhorns in Austin on Saturday. Frankly, if Neal Brown kicked the field goal early in the fourth quarter, like I recommended he did at the time (go subscribe to our podcast to hear more), WVU probably wins this game because they would not have had to go for it on 4th down late in the fourth quarter. Alas, they didn’t and now the Mountaineers are out of the Big 12 title race.

Kansas State has now lost two in a row after falling to Oklahoma State on Saturday. But the the Mountaineers, a poor coaching decision may have cost K-State. Instead of kicking the extra point in the first half to make it 13-0, Chris Klieman chose to go for a two-point conversion, which he missed, and then K-State had to go for two late in the game instead of kick an extra point for overtime. Such is life, but that was a critical error for the Wildcats.

The Baylor Bears and the fan base are hurting this week. They blew a 14-point lead to Iowa State on the road and gave up 28-unanswered points. Brutal. This team has now lost four in a row after the season-opening win vs. Kansas. Now they also find out that star linebacker Terrel Bernard is out for the rest of the season. Ouch.

The Red Raiders are coming off another loss to TCU and are now 1-5 in Big 12 play. The offense hasn’t looked much better under new QB Henry Colombi and the defense continues to have issues, despite having a lot of transfer talent in key positions. This season could quickly turn into a disaster for head coach Matt Wells in Year 2.

Ah man. This team is bad. The offensive line needs to get better for the offense to have any juice to it moving forward. I feel for all these young guys taking big lumps this year but hope it pays off for KU in the future.